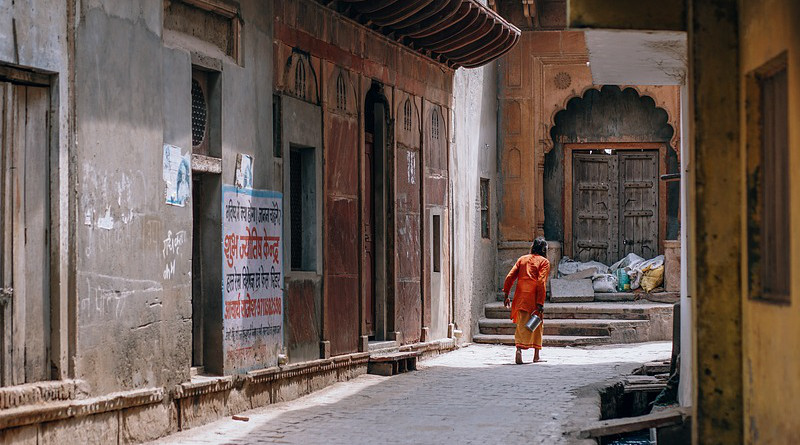 “Today, I sold more than Rs 2,500 worth flowers,” says an exhilarated Vishnu Shinde, “much more than I sold in the last whole week.” Shinde, who had converted his flower shop to a make-shift vegetable shop in the lockdown to cater to local needs, had to swiftly revert to his original flower shop this week.

“I had many orders for deliveries but owing to shortage in staff, I requested everyone to pick up their orders from the shop itself. So, locals, mandir pujaris and the devout all made a beeline for my shop from early morning of August 5, today being Ram Temple’s Bhoomi Pujan,” said the flower-seller.

Today, twenty-eight years since the deplorable Babri Masjid demolition when religion sent communities take polarised positions, scurrying for safety within their ‘own’ mohallas and chawls faced with the blood-curdling riots that ensued, today the story is different. At least, on the face of things.

In the face of a larger enemy – Coronavirus, the common man has pooled his resources, shed all religious differences, and learned his lessons, the hard way. “Today, nobody can save you from COVID unless you are safe and ensure that your neighbourhood is too,” says 34-year-old courier delivery personnel Shailesh Mhatre. “It really doesn’t matter if you are Hindu, Muslim or Sikh, what matters here is that anyone can be hit by this menace,” he says.

Colleague and friend since school Mushtaq nods in unison as he waits for an order to arrive so that he can get it delivered to a customer in the next lane.  Mushtaq runs a neighbouring chiliya restaurant where Shailesh ‘hangs about’ till he gets his order and rushes off.

Shailesh and Mushtaq’s friendship is unique. Their fathers would get into ugly brawls each time there was a Hindu-Muslim riot anywhere in India. “Why riot? Even whenever there was an India-Pakistan match, I’ve heard, my grandmother would send my dad off to her sister’s place at Mumbra. If he stayed back here, whoever would win, there would be an ugly fight with uncle, Shailesh’s dad, who was as hot-tempered as my own,” says Mushtaq. The two remember having grown up over attending the local police station every second day where their fathers would be called to “settle” matters.

And then, with time, we grew up…literally and figuratively. The two were in the same school, even the same class and became friends over time. This, despite their families trying their best to keep them away, fearing a repeat of the violent interludes their fathers had. Over time though, the families went on to develop a lot of respect for each other’s cultures, religions and decided to dump the past.

For the common man, religion is now a tool of convenience, of business and progress. Right from the skewedly-inclined who simply refuse to patronise business places of ‘a’ particular religion to those who prefer to go only to the shop of ‘a’ member of a particular community, it’s finally business that wins.

The religious rivalry has now transgressed from patent violence and street fury to lobbying in favour of ‘one’ and against ‘another’ through fake news spread across social media and word of mouth. “The likelihood of believing fake news detrimental to the interest of ‘a’ religious community is usually propagated and ‘forwarded’ by members of ‘another’ religious community and vice versa.

The riots may have been slowed in their tracks, even stopped for now, owing to good governance, the COVID-Pandemic and the lockdown but religion has the propensity to raise its hood in uncanny ways.

Why, didn’t the usual suspects convert the Citizens Amendment Act and the NRC, even before it was implemented across India, into a religious issue that triggered the Delhi riots. And now, as things pan out, the Delhi police have claimed that the suspended Aam Aadmi Party councillor Tahir Hussain has “confessed about his role” in the riots and that he “wanted to teach Hindus a lesson”.

And, the motivated few now use spanking new tools to perpetrate hatred and trigger unrest across digital platforms and via media. The common man, never did nor will, be party to the orchestrated mess. But gets roped in, inevitably, despite all.

So, if lessons are to be learnt from history. Just as it repeats, while the Ayodhya issue seems resolved and finally settled through an Apex Court judgement and a peaceful bhumi pujan, fact remains, the fire for retribution in the disgruntled is only simmering. It’s a matter of time before it reaches a boil. The State must be on guard!