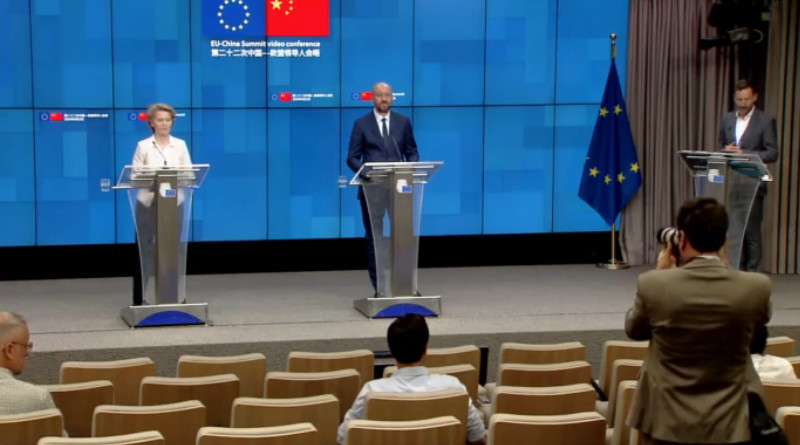 (EurActiv) — In contrast to the US administration’s ideological war with China, the EU is still keen to maintain a cooperative relationship where possible with Beijing.

According to one senior EU official, Pompeo’s speech at the Nixon centre last week was ‘high on bombast and low on policy.’ he added that the EU will not refrain from criticising China over human rights or taking action, as it did this week on Hong Kong, but it sees no other option than to work closely with China in the current crisis.

Commission Vice President Valdis Dombrovskis echoed this line on 28 July in launching the second High Level Dialogue with China in two months, ‘we can recover much more quickly by pulling together.

Dombrovskis and Phil Hogan, the trade commissioner, were joined by Chinese vice-premier Liu He to review progress on economic relations and especially the long-running negotiations for a comprehensive investment agreement.

Hogan acknowledged that on this file there had been ‘significant progress made on level playing field issues’ but much work remained to be done on market access and sustainable development.

On market access, the EU wants to see greater reciprocity and an improved Chinese offer in the telecommunication and computer sectors, financial services, health, biotechnology and new energy vehicles. Essentially the EU is seeking the same level of access as the US obtained in phase one of its deal with China.

More immediately, the Commission is seeking an end to new restrictions introduced on food exports, on the ground of controlling the coronavirus pandemic.

One of the major sticking points, state subsidies to industry, has become more complicated because of the pandemic. Many EU countries have offered huge sums to keep their industries afloat, a policy which the Chinese claim is not dissimilar to their own state aid. The EU response that these are temporary measures leads to a wry smile on the faces of the Chinese negotiators.

The end-game in the negotiations will also have to tackle issues relating to sustainable development. For the EU side, this means that China should accept a range of international environmental and labour conventions. This would address a concern of the European Parliament that ethnic minorities were being used to produce goods in labour camps.

In addition to the 28 July discussion on the investment agreement, the two sides also discussed a range of regulatory issues in the financial services area, including cooperation on green finance, equivalence assessments, and the international role of the Euro and of the RMB.

There was broad agreement on the need to work together, including in the WHO and WTO, to ensure a coordinated response to both the health and economic emergencies.

Under pressure from some member states, the EU will not conclude talks on the 2025 Cooperation Agenda, something China wants, until there is closure on the investment agreement.

Another virtual summit of EU leaders including Chancellor Angela Merkel with China’s President Xi Jinping is scheduled for 14 September. This looks increasingly like a decisive moment. For Xi the question is does he want a trade war with the US and the EU? The betting in Brussels and berlin is that he does not and will wish to conclude a deal with the EU.

Despite critics, the EU position is thus quite clear on China. It will take measures to defend its security, as over recent decisions on 5G and investment screening, and continue to raise concerns on human rights.

But there will be no ideological confrontation and no decoupling from China. The official aim is still to finalise the investment agreement negotiations by year-end and possibly conclude with a major live summit towards the end of the German presidency.

This would be Merkel’s hope but given political sensitivities with the Trump administration any such summit would likely be after the US elections. As one EU official said, ‘let’s hope we are in a position then to move on to a new chapter in discussing China with an incoming Biden administration.’ Meanwhile, the EU will continue to go its own way in relations with China.