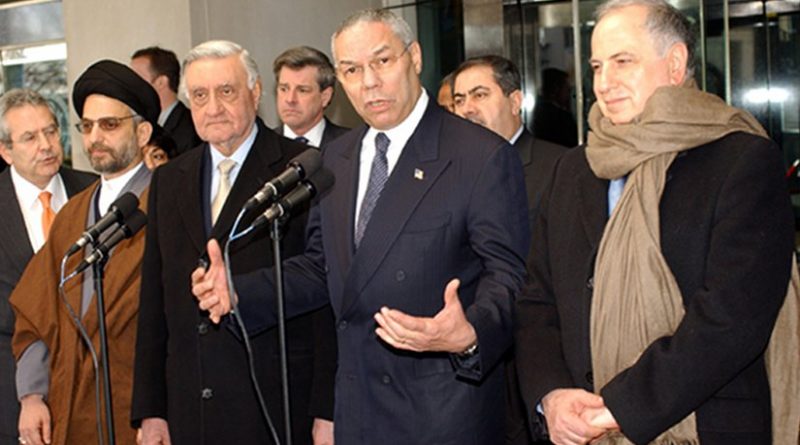 The “what if”’s of history can be as tantalizing as they are uncertain. But Ahmed Chalabi, who died yesterday at age 71, sits at the center of one of the most intriguing. Would 4,100 Americans who were killed in Iraq be alive today, and would thousands more have come home uninjured, if he had become Iraq’s president following the fall of Saddam Hussein?

The obituaries in the mainstream press, of course, say nothing about this possibility. Most have simply said that “he lied about WMDs in Iraq” — or encouraged others to do so. That is in itself a lie, as I’ll explain. But the media’s false narrative about Chalabi obscures his real importance, as the man who led Iraqi resistance to Saddam’s murderous regime for more than a decade — and might have become his successor if short-sighted and vengeful U.S. officials hadn’t destroyed his reputation instead.

Born to a wealthy Shia family which was forced to flee Iraq in 1958 when the Baath Party seized power, he graduated with degrees from both MIT and the University of Chicago, where he earned a Ph.D. in mathematics. His real passion, however, was working to bring democracy to his home country and destroy Saddam’s regime before it destroyed Iraq. So when the CIA needed someone with contacts in Iraq to build support for an anti-Saddam coup in the wake of Operation Desert Storm, it turned to Chalabi, whose Iraqi National Congress (INC) was already evolving into a powerful non-sectarian democratic organization involving Sunnis, Kurds, and Shiites like Chalabi himself.

Fast forward to 2002 and the eve of Operation Iraqi Freedom. When the Bush administration decided to reach out to Iraqi exile groups to head up a government to take over after the U.S. invasion, the INC and Chalabi in particular seemed the natural choice.

But the CIA and State Department immediately stomped on the idea. The CIA’s dislike of their former client went back to 1996, when he had warned that a coup it was organizing was already known to Saddam and traveled to Washington to get it called off. (The CIA official who went ahead and gave the green light anyway, only to watch the coup collapse and those involved get arrested and shot, was none other than George “Slam Dunk” Tenet.)

The State Department reviled Chalabi as well, for having lobbied Capitol Hill for passage of the Iraq Liberation Act, which then-president Clinton signed, the first major call for regime change in Iraq when State wanted the issue kept on the back burner.

So when the Department of Defense pushed for Iraqi exiles to assume power in Iraq as soon as possible after the invasion to avoid the appearance of a U.S. occupation, Colin Powell and the State Department said no out of fear of Chalabi. Instead Iraq got Paul Bremer and the Coalition Provisional Authority, who could neither avoid the appearance of an American occupation or control the escalating violence.

The rest is history, tragic history. It’s hard to say now what might have happened had Chalabi and other exiles been allowed to form a transition government before the invasion, as the Bush administration originally planned. As a secular-minded Shiite, Chalabi might have built the bridges to the Kurds and Sunni needed to keep Iraq from spiraling into chaos. Tens of thousands of lives – as well as U.S. foreign policy in the Middle East — might have been saved in the process.

Instead, his reward was to be pilloried in a media disinformation campaign backed by State and the CIA, that Chalabi was responsible for the WMD “lies” and was therefore responsible for the entire war. Newsweek even ran a cover story, “Our Con Man in Iraq,” to that effect.

In fact, the opposite is true. No intelligence service, not even the CIA, needed Chalabi to tell them that Saddam did indeed have WMD programs, just as Colin Powell didn’t need Chalabi to tell him that Saddam was hiding them from U.N. inspectors. But when the search for stockpiles turned up none, Powell and the CIA needed a scapegoat and Chalabi made a convenient fall guy.

No less than two independent investigations — one by the Senate Select Committee on Intelligence and the Robb-Silberman Commission on Iraq Intelligence in 2005 — cleared Chalabi’s name of any responsibility. Yet the myth that Chalabi lied us into war, and was even a secret agent of the Iranians, lives on — and besmirches the name and memory of a man who, if he wasn’t the George Washington of his country, wasn’t its Svengali, either — and who, by healing Iraq’s sectarian breaches, could have saved us all a lot of blood and treasure.

Source:
This article was published at National Review’s Corner and the Hudson Institute and is republished with permission.

Prof. Hudson is Chief Economic Advisor to the Reform Task Force Latvia (RTFL). Michael Hudson is President of The Institute for the Study of Long-Term Economic Trends (ISLET), a Wall Street Financial Analyst, Distinguished Research Professor of Economics at the University of Missouri, Kansas City and author of Killing the Host (2015) Super-Imperialism: The Economic Strategy of American Empire (1968 & 2003), Trade, Development and Foreign Debt (1992 & 2009) and of The Myth of Aid (1971). For more of his writing check out his website: http://michael-hudson.com.

One thought on “Ahmed Chalabi And Iraq: He Didn’t Lie About WMDs – OpEd”