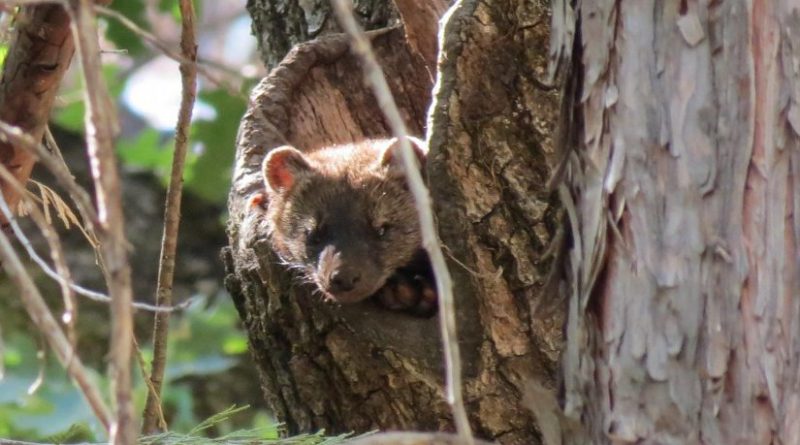 The relatively rare, forest-dwelling fisher is increasingly becoming the innocent victim of illegal marijuana farms in forested lands in California.

According to a recently published study in the journal PLOS One, researchers found that the annual rate of poisoning deaths of fishers (Pekania pennant) rose 233 percent compared to a study in 2012. The toxicants were discovered to be associated with illegal marijuana farms on public and tribal lands in Northern and Southern California.

Previous studies showed that rat poisons were being found in the tissues of this cat-sized relative of the weasel family when they were in proximity of illegal marijuana cultivation sites in rugged portions of Northern California and the southern Sierra Nevada.

This new study examined the deaths of 167 fishers – 129 of which cause of death was determined – and revealed that Northern California fishers were five times more likely to die from poisoning than predation compared to fishers in the southern Sierra Nevada;

Overall, male fishers were 13 times more likely to die of poisoning than predation compared to females. This is potentially due to the large movements made by male fishers during the spring breeding season, when growers’ use of rodenticides peaks. Eight-five percent of fishers showed exposure to rat poison, and fishers were, on average, exposed to multiple types of poison. Poisoning accounted for 10 percent of all documented fisher mortalities.

New, never-before seen rodenticides – cholecalciferol and bromethalin – were the cause of death in two cases.

“We know that a 10 percent change in mortality rate is enough to determine whether fishers in California are able to expand their population size or not,” said Dr. Craig Thompson, a PSW research wildlife ecologist and one of the study’s authors. “Now we know that rodenticide poisoning alone is enough to keep fisher populations suppressed in the state, even without accounting for the fact that low doses of these poisons also cause the animals to be lethargic and susceptible to disease, which in turn increases the potential for other sources of mortality.”

A team of researchers from the U.S. Forest Service’s Pacific Southwest Research Station, Integral Ecology Research Center, University of California, Davis, University of California, Berkeley, and partner organizations conducted the study from 2007 to 2014 at three research sites – one in Northern California and two in the southern Sierra Nevada. At all locations, researchers captured fishers in box traps – humane enclosed traps – and fitted them with a VHF radio-collar with the goal of collecting information, such as habitat use and survival rate. Researchers tracked the animals and were able to retrieve the carcasses when data from the collars indicated that an animal had died. They recorded all causes of death, including predation (70 percent), natural disease (16 percent), poisoning (10 percent), vehicular strike (2 percent) and human causes (2 percent). Bobcat (40 percent), mountain lion (38 percent), and coyote (6 percent) were the fisher’s primary predators.

“This study further solidifies the need for continuing to remediate and remove these threats to fishers and other species of conservation concern within our public lands,” said Dr. Mourad Gabriel, executive director of the Integral Ecology Research Center and the study’s lead author. “I hope the next steps can focus on rectifying the harmful effects of this clandestine activity so that they do not stem the years of conservation efforts of stabilizing the California fisher populations.”