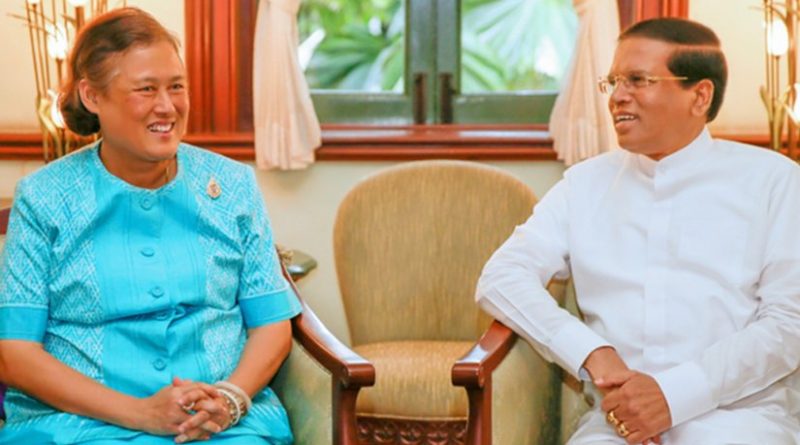 Sri Lanka’s President Maithripala Sirisena, who is on a four day state visit to Thailand, met Wednesday with the Princess Maha Chakri Sirindhorn of Thailand at the Sra Pathum Palace.

Sirisena was warmly welcomed by the Princess at the Palace and said when she visited Sri Lanka she learned the hospitality of its people and she further said that Sri Lanka is a beautiful country.

Sirisena thanked for the invitation extended to him to visit Thailand and expressed his high appreciation over the hospitality shown to him by the Thai Government and its people. President Sirisena extended an invitation to the Princess Maha Chakri Sirindhorn to visit Sri Lanka.

President Sirisena traveled to Thailand on November 1 on an invitation extended by the Prime Minister of Thailand to participate in the 60th Anniversary celebration of the establishment of Diplomatic Relations between Sri Lanka and Thailand.

Sirisena held bilateral discussions with the Prime Minister of Thailand General Prayut Chan-o-cha at his official residence commencing the diplomatic affairs. The President also inaugurated the exposition of the Sacred Relics from Mahiyangana Rajamaha Viharaya, in the Buddhamanthan Temple in Thailand on November 2.

Sirisena addressed the Thailand – Sri Lanka Business Forum in Bangkok on November 3. A ceremony to place special Samadhi Buddha Statue offered from Sri Lanka to Thailand held under the patronage of the President.

The cultural and religious relationship between the two countries further strengthened during the President’s visit to Thailand.