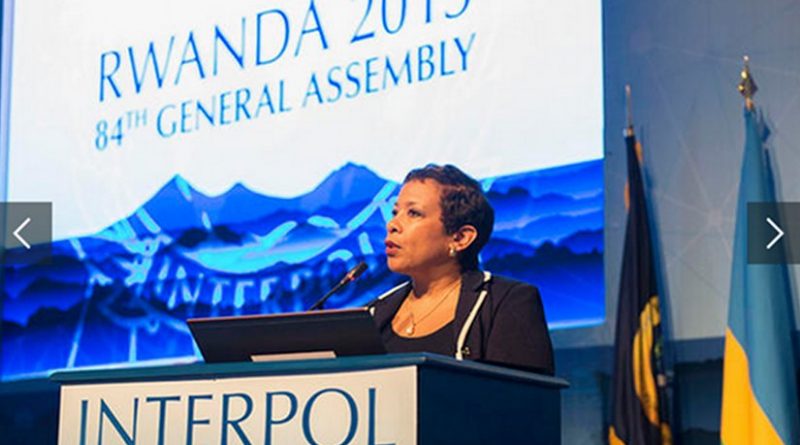 US Attorney General Loretta Lynch told delegates at the INTERPOL General Assembly that upholding the rule of law is a government’s foremost responsibility.

Delivering the keynote speech at the international gathering of some 640 police chiefs and senior law enforcement officials, Attorney General Lynch said INTERPOL ‘stands as an invaluable conduit for mutual assistance between law enforcement agencies across the world and a critical facilitator for international cooperation in matters of security, opportunity and human rights’.

Pointing to the issue of human trafficking as one of her highest priorities as Attorney General, Ms Lynch said it remained one of the foremost challenges to the international community.

“With its ties to organized crime, its preying on flows of migrants and its complex financing schemes, human trafficking is a truly global problem that demands a truly global response,” said Attorney General Lynch.

“The international community has come a long way in the last 15 years, but the fact that millions of individuals remain in forced labour reminds us of how far we have to go. We must find ways to work even more closely together in order to end this affront to our values and stop this crime against humanity,” added the Attorney General pointing to the FBI’s annual Operation Cross Country initiative against individuals trafficking children for sexual exploitation which this year resulted in the arrest of hundreds of sex traffickers.

In addition to highlighting INTERPOL’s role at the forefront of the global crusade against human trafficking, Attorney General Lynch said the world police body’s work involved action against some of the most important and complex law enforcement challenges.

In combating the threat of foreign terrorist fighters, Attorney General Lynch said INTERPOL’s network to coordinate global counter-terrorism activities was an invaluable resource in stemming the illicit travel of individuals moving to and from conflict zones.

In concluding her remarks, the Attorney General encouraged delegates to continue to play their part in upholding the rule of law and urged all countries to ‘continue, every day, to pursue our mission of a safer world, to advance our vision of a more just society and to hold close our hope of a brighter future for all’.

The General Assembly is INTERPOL’s supreme governing body, which meets once a year. Discussions at this year’s session in Kigali are addressing some of most pressing cross-border challenges faced by police today, including counter-terrorism and foreign terrorist fighters, the organized criminal groups behind drug trafficking and people smuggling, and the different facets of cybercrime.