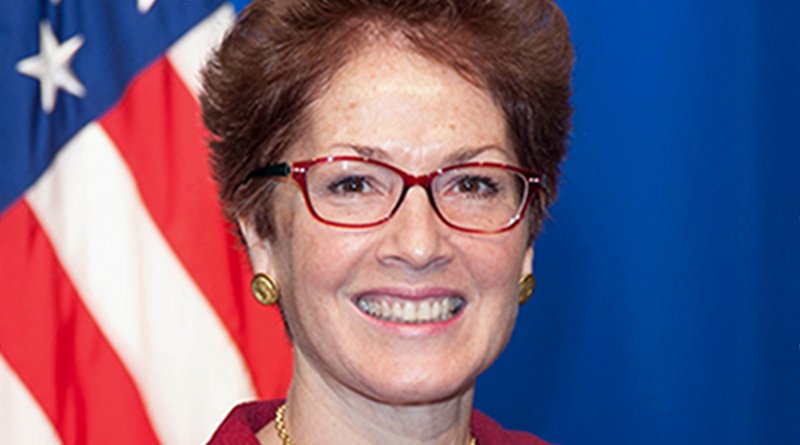 (RFE/RL) — Marie Yovanovitch, who was abruptly recalled as U.S. Ambassador to Ukraine earlier this year, told congressional investigators that she felt unsupported by the State Department prior to her departure, and threatened by President Donald Trump after.

Yovanovitch, who testified before U.S. lawmakers last month, was the latest in a series of current and former U.S. officials who have been called for questioning as part of the House of Representatives’ inquiry into whether Trump should be impeached.

Excerpts of her October 11 testimony had previously been leaked, but the Democratic-led committees spearheading the impeachment effort released the entire transcript of her appearance on November 4.

A veteran Foreign Service officer, Yovanovitch has said she was the victim of a shadowy smear campaign, conducted by allies of Trump, when she was prematurely recalled from her post in Kyiv in May.

Two months after she left, Trump had a phone call with Ukraine’s newly elected president, Volodymyr Zelenskiy, in which he criticized Yovanovitch as “bad news.”

During that same phone call, Trump also asked Zelenskiy “to do us a favor,” by investigating a Ukrainian energy company whose board included the son of Trump’s political rival, former Vice President Joe Biden.

At the time, the Trump White House had suspended nearly $400 million in crucial military aid to Ukraine to support its fight against Russian-backed separatists; the White House’s chief of staff has said that the aid was withheld to force Ukraine to investigate a conspiracy theory involving the 2016 cyberhack of the U.S. Democratic party.

That phone call, and a whistle-blower account of it, helped spur the impeachment effort being led by the Democratic-led House.

According to the newly released transcript, Yovanovitch last year learned that she was becoming the victim of a conservative smear campaign that had painted as her being insufficiently loyal to Trump.

She also said that she was aware of some of the key Trump allies involved in the effort to malign her, including Trump’s personal lawyer, Rudy Giuliani. And she said she was aware of the interest by Giuliani and some of his associates in investigating Biden and the energy company Burisma “with a view to finding things that could be possibly damaging to a presidential run.”

Asked for her reaction when she learned how Trump criticized her during the phone call with Zelenskiy, Yovanovitch said she was shocked that Trump would speak about her, or any ambassador, in that way. She also said she felt threatened.

Prior to her being recalled, she had sought support, through intermediaries, from Secretary of State Mike Pompeo, but received none, she said. She also turned to the U.S. ambassador to the European Union, Gordon Sondland, for advice about how to get more backing in Washington.

He counseled her to “tweet out there that you support the president.”

“It was advice that I did not see how I could implement in my role as an ambassador, and as a foreign service officer,” she said.

While she was in Ukraine, Yovanovitch, like previous U.S. ambassadors, was vocal in her support of Ukraine’s efforts to clean up its rampant corruption, among government agencies and major state companies.

At one point earlier this year, Ukraine’s Prosecutor-General Yuriy Lutsenko publicly accused Yovanovitch of giving him a list of Ukraninian officials that Washington ordered should not be prosecutors. He later recanted the accusation.

Lutsenko’s role in trying to push out Yovanovitch appeared last month in an indictment handed down by U.S. prosecutors against two U.S. businessmen who were born in the Soviet Union. The two businessmen, Lev Parnas and Igor Fruman, had enlisted a Texas congressman to lobby the State Department to recall Yovanovitch from her post in Kyiv.

Asked about Fruman and Parnas, Yovanovitch told lawmakers that she thought they were looking to expand business interests in Ukraine “and that they needed a better ambassador to sort of facilitate their business’s efforts here.”

Yovanovitch also said she was told by Ukrainian officials late last year that Giuliani was in touch with Lutsenko “and that they had plans, and that they were going to, you know, do things, including to me.”

House lawmakers released the transcript from another U.S. official who testified before the inquiry: Michael McKinley, who resigned as a top adviser to Pompeo.

McKinley said he pressed top State Department officials to publicly back Yovanovitch, according to the transcript.

McKinley said he spoke directly with Pompeo and other senior State Department officials about issuing a public statement. Eventually, he said, he was told that they did not want to “draw undue attention” to Yovanovitch.

“The timing of my resignation was the result of two overriding concerns,” McKinley told lawmakers, according to the transcript: “the failure, in my view, of the State Department to offer support to Foreign Service employees caught up in the impeachment inquiry; and, second, by what appears to be the utilization of our ambassadors overseas to advance domestic political objectives.”