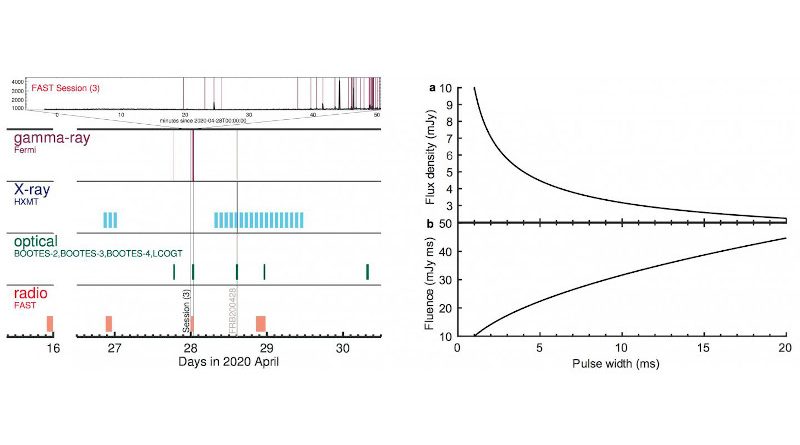 Researchers from Beijing Normal University, Peking University and National Astronomical Observatories of the Chinese Academy of Sciences (NAOC) found that there is weak correlation between fast radio bursts(FRBs) and soft gamma-ray repeater J1935+2145(SGRs). The study was published in Nature.

The detection of FRB 200428 associated with the galactic magnetar SGR J1935+2154 provides crucial clues to the generation of FRBs.

In April, Dr. LIN Lin from Beijing Normal University, first author of the study, proposed monitoring SGR J1935+2154, a soft gamma-ray repeater showing FRB like pulses, to explore the origin of FRBs. FAST detected no pulse during the campaign, particularly around the arrival time of 29 high-energy bursts.

Combined with CHIME and STARE-2 detections?FAST’s results cover eight orders of magnitude on the brightness scale, thus providing the most stringent limit to the radio flux of this Galactic fast radio burst (FRB) sources.

“The weak correlation could be explained by special geometry and/or limited bandwidth of FRBs,” said Prof. ZHANG Bing from University of Nevada, corresponding author of the study. “The observations of SGR J1935 start to reveal the magnetar origin of FRBs, although other possibilities still exist.”

While continuing the monitoring of SGR J1935+2154, the unprecedented sensitivity of FAST has potential for revolutionizing our understanding of radio transients. In May of this year, Prof. ZHU Weiwei from NAOC, co-author of the study, published the first new FRB discovered by FAST.

According to Prof. LI Di, co-corresponding author of the study, FAST’s chief scientist, “FAST has discovered more than five new FRBs and has detected more than 1,600 pulses from known repeating sources. FAST is and will be making unique contributions to this young and active field.”