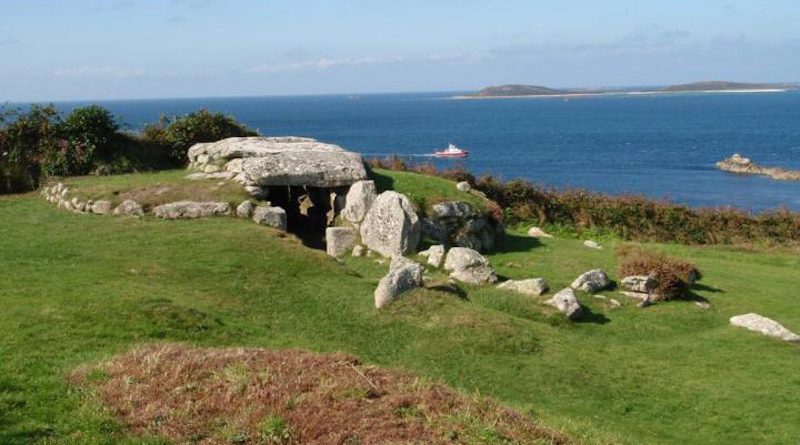 Rising sea levels will affect coasts and human societies in complex and unpredictable ways, according to a new study that examined 12,000 years in which a large island became a cluster of smaller ones.

Researchers reconstructed sea-level rise to produce maps of coastal changes at thousand-year intervals and found that today’s Isles of Scilly, off the UK’s south-west coast, emerged from a single island that only became the current configuration of more than 140 islands less than 1,000 years ago.

The study, led by the University of Exeter in partnership with Cornwall Archaeological Unit, Cardiff University and 14 other institutes, found that changes in both land area and human cultures happened at variable rates, and often out of step with the prevailing rate of sea-level rise.

With climate change now driving rapid sea-level rise, the team says the effects will not always be as simple as a forced human retreat from coasts.

“When we’re thinking about future sea-level rise, we need to consider the complexity of the systems involved, in terms of both the physical geography and the human response” said lead author Dr Robert Barnett, of the University of Exeter.

“The speed at which land disappears is not only a function of sea-level rise, it depends on specific local geography, landforms and geology.

“Human responses are likely to be equally localised. For example, communities may have powerful reasons for refusing to abandon a particular place.”

The researchers developed a new 12,000-year sea-level curve for the Isles of Scilly, and looked at this alongside new landscape, vegetation and human population reconstructions created from pollen and charcoal data and archaeological evidence gathered. The new research extends and enhances data collected by the Lyonesse Project (2009 to 2013), a study of the historic coastal and marine environment of the Isles of Scilly.

These findings suggest that during a period between 5,000 and 4,000 years ago land was rapidly becoming submerged. In response to this period of coastline reorganisation, people appeared to adapt to, rather than abandon, the new landscape.

By the Bronze Age (after 4400 years ago), the archaeological record suggests the area had a permanent population – and instead of leaving the islands, it appears that there may have been a “significant acceleration of activity”.

The reasons for this are unclear, but one possibility is that new shallow seas and tidal zones provided opportunities for fishing, shellfish collection and hunting wildfowl.

This period of rapid land loss happened at a time of relatively slow sea-level rise – because lots of Scilly’s land at that point was relatively flat and close to sea level.

The study found that between 5000 and 4,000 years ago, land was being lost at a rate of 10,000 m2 per year, which is equivalent to a large international rugby stadium. However, about half of this land was turning into intertidal habitats, which may have been able to support the coastal communities.

Charlie Johns (Cornwall Archaeological Unit) co-director of the Lyonesse Project said “This new research confirms that the period immediately before 4,000 years ago saw some of the most significant loss of land at any time in the history of Scilly — equivalent to losing two-thirds of the entire modern area of the islands”.

After 4,000 years ago, the island group continued to be submerged by rising sea levels, even during modest (e.g., 1 mm per year) rates of sea-level rise.

“It is clear that rapid coastal change can happen even during relatively small and gradual sea-level rise,” said Dr Barnett.

“The current rate of mean global sea-level rise (around 3.6 mm per year) is already far greater than the local rate at the Isles of Scilly (1 to 2 mm per year) that caused widespread coastal reorganisation between 5,000 and 4,000 years ago.

“It is even more important to consider the human responses to these physical changes, which may be unpredictable.

“As can be seen today across island nations, cultural practices define the response of coastal communities, which can result in polarised agenda, such as the planned relocation programmes in Fiji versus the climate-migration resistance seen in Tavalu.

“In the past, we saw that coastal reorganisation at the Isles of Scilly led to new resource availability for coastal communities.

“It is perhaps unlikely that future coastal reorganisation will lead to new resource availability on scales capable of supporting entire communities.

“More certain though, is that societal and cultural perspectives from coastal populations will be critical for responding successfully to future climate change.”

Residents and healthcare workers that work in care homes for the elderly, and people with disabilities will be the first