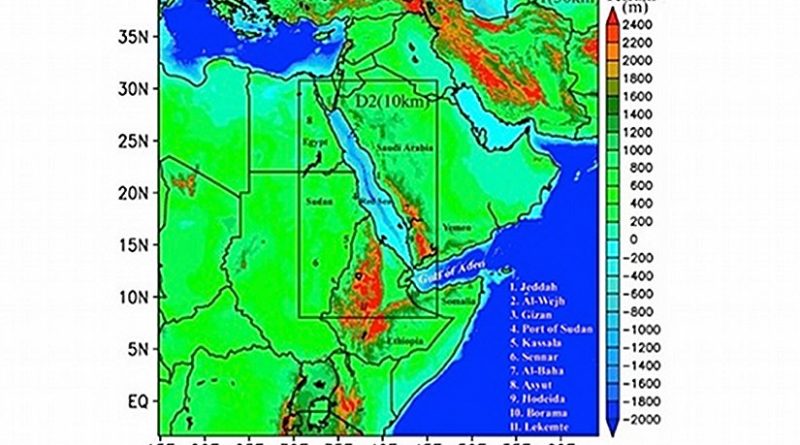 The analysis covered a rectangular-shaped area around the Red Sea. Reproduced with permission from ref 1(c) 2016 John Wiley and Son

Red Sea climate data covering the period between 2000 and 2014 has been reconstructed highly accurately at smaller time and space intervals than ever before. KAUST researchers used an advanced numerical weather modelling system that incorporates all weather data from the region1.

The system, called the Advanced Research version of Weather Research and Forecasting (WRF-ARW), was developed by the United States National Centers for Environmental Prediction to reconstruct and forecast weather data based on current conditions.

Ibrahim Hoteit, Associate Professor of Earth Science and Engineering in the Physical Sciences and Engineering Division, and colleagues took advantage of the advanced computational facilities at KAUST to customize the system and generate ‘high-resolution’ regional climatic data (covering relatively small timescales and geographic areas) over the Red Sea.

To do this they combined ‘low-resolution’ global reconstructed climatic data (covering relatively large geographic areas and timescales) with available satellite and in situ observations over the region.

The model also clearly shows the evolution and duration of the ‘Red Sea Convergence Zone’ and the conditions that favor its intensification. In the winter, tropical and extra-tropical wind systems converge in this zone in the middle of the Red Sea, leading to localized cloudy skies and drizzle in an otherwise largely cloud- and rain-free area, explains KAUST Research Scientist Hari Dasari, the lead author of the study.

The research highlights the utility of the WRF-ARW for producing high-resolution data in the Red Sea region, which can further help understanding Red Sea circulation, its ocean surface processes and marine biodiversity, the researchers say.

The team is currently working on minimizing uncertainties in the model’s predictions and improving the quality of the generated data sets, said Hoteit. They are also developing new higher-resolution datasets covering longer time periods for the entire Middle East region.

In addition, they are using the model to study some extreme events that recently affected Saudi Arabia-such as the Jeddah floods of November 2009 and January 2011, and the Mecca storm of September 2015-with the aim of assessing their predictability.

Finally, they plan to build a seasonal prediction system of the atmospheric circulation over the Saudi Arabian peninsula.