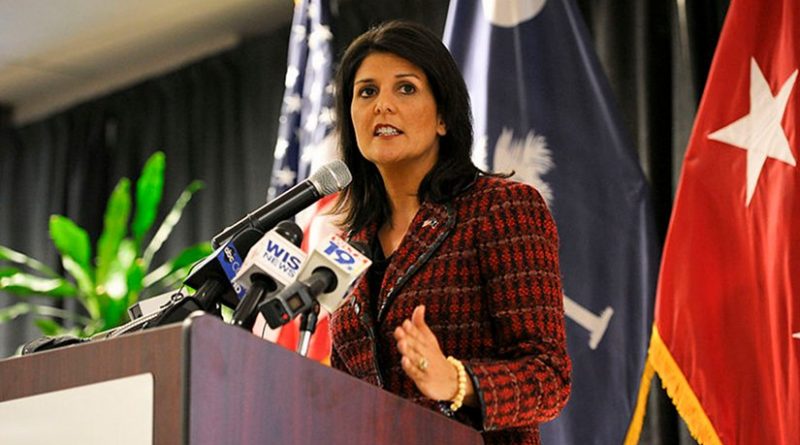 The first American-born Indian-origin woman, Nikki Haley, made history in U.S. by being nominated to serve as U.S. Ambassador to the United Nations, by President-elect, Donald Trump, on November 23. She is one of the two women in Trump cabinet, the other is, Ms Betsy DeVos, Secretary of Education nominee.

Haley, 44, born as Nimrata Nikki Randhawa on January 20, 1972, is the American-born daughter of Indian immigrants. Her parents, Ajit Singh Randhawa and Raj Kaur Randhawa, immigrated to Canada after her father received a scholarship offer from the University of British Columbia. Her father moved his family to South Carolina after earning PhD in 1969.

Haley is a rising star in Republican politics. She is the first woman to serve as Governor of South Carolina; at the age of 44, she is the youngest current governor in the United States. Prior to becoming governor, she represented Lexington County in the South Carolina House of Representatives from 2005 to 2011.

Donald Trump’s nomination of Haley is “a move that will probably serve to both assuage and confound the president-elect’s critics, raising questions about the tone and direction of his foreign policy. As an Indian-American woman, she would also add ethnic and gender diversity to the appointments, so far predominantly of white men, he has made to other top posts in the administration”, write Richard Fausset and Somini Senguptra in New York Times.

Tweeting in March, Trump panned her, “The people of South Carolina are embarrassed by Nikki Haley!”

In response to an attack by the then GOP presidential candidate Donald Trump, Hailey‘s response “bless your heart” was extensively covered in the media.

During the campaign, Haley, like other Republicans including Paul Ryan, disagreed with Trump outright on many major issues; and as with many of his potential appointees.

In response to Trump’s anger and anti-immigrant tirade, she said: “No one who is willing to work hard, abide by our laws, and love our traditions should ever feel unwelcome in this country.”

Haley has little foreign policy experience, yet Trump praised her as “a proven dealmaker”.

Haley said she had accepted the offer because she felt good about South Carolina’s economic standing. She added that the November elections had brought “exciting changes to America”.

“When the president believes you have a major contribution to make to the welfare of our nation, and to our nation’s standing in the world, that is a calling that is important to heed,” the statement said.

In 2012, former Governor Mitt Romney considered her for his vice-presidential running mate.

In early 2016, Haley was mentioned as a potential candidate for the Vice Presidency. On May 4, 2016, after Trump became the presumptive presidential nominee following his last competitor John Kasich suspending his campaign, Haley denied interest in the vice presidential nomination.

Haley was described in the Economist as a politician with high approval ratings and as combination of “fiscal ferocity and a capacity for conciliation”, and stated that as a female candidate and ethnic minority she would have appeal.

Among the 40 women, Haley was named in the list of “The 100 Most Influential People” by Time magazine.

“Haley’s supporters are likely pleased that the appointment will elevate her and give her an even higher profile on the national stage. A rare woman of color who is a Republican elected official, Haley has been considered a rising star in the GOP. In fact, some hope Haley will one day take the White House, and even with the nomination, Nikki Haley could still run for president in 2020”, writes Elizabeth Strassner in Bustle.

*The writer is President International Press Syndicate (INPS) North America and the Caribbean and North America Bureau Chief of IDN based in Toronto, Canada. He is Publisher and Managing Editor of South Asian Outlook and IndoCanada Outlook, online publications of INPS.

A joint American-Israeli program [1], involving a series of short-of-war clandestine strikes, aimed at taking out the most prominent generals of the