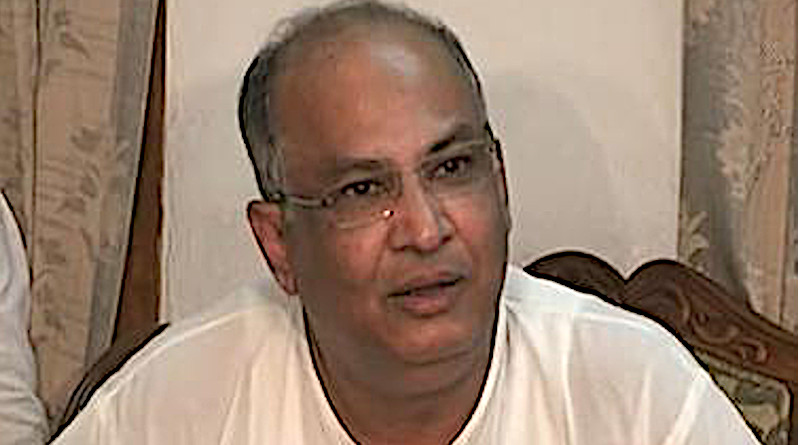 “Salahuddin Quader Chowdhury was hanged in 2015 after being convicted of crimes committed in 1971 during Bangladesh’s war of independence with Pakistan. The tribunal that convicted him was established by Hasina […] Thousands of opposition activists have been arrested under the rule of Prime Minister Sheikh Hasina, who has tightened her grip on power since being re-elected in December.” — Asia Times

Judicially murdered Salahuddin Quader Chowdhury (SQC), one of the wittiest politicians and parliamentarians and the satirically most sharp-tongued BNP-led government ministers that one can ever recollect, deserves many befitting tributes. This one is just a humble attempt. One of those infamously hanged by Sheikh Hasina’s controversial International Crimes Tribunal (ICT), SQC was a memorably interesting political figure of his own kind, in his own worth. The vindictive execution that he faced with calm, courage and dignity made him more lasting in the public mind than he would otherwise have been. Of well-known political background, his father, Fazlul Quader Chowdhury (FQC), was the illustrious son of the southern district of Chittagong, who graduated from Calcutta Presidency College and Calcutta University.

A Convention Muslim League leader, FQC was the Speaker of Pakistan National Assembly from November 1963 to June 1965, in addition to serving in a number of ministries under President Ayub Khan. He was also “Acting President of Pakistan from time to time before the independence of Bangladesh.”

Not only the people of Chittagong in particular but also those of Bangladesh in general should remain grateful to him—as grateful as they also should to Nawab Sir Salimullah Bahadur of Muslim League and the other members of the extended Nawab family for their historic and incomparable contributions and achievements in the interest of the people of East Bengal (now Bangladesh) in the 1920s and onwards. Ironically, nobody talks of Sir Salimullah who had the greatest contribution in setting up the University of Dhaka that became the earliest citadel of higher learning for the ignored and neglected Muslim majority of East Bengal. It is also ironic that both Sir Salimullah and FQC died early deaths, shrouded in mystery, the former in his forties and the latter in his fifties (while he was in jail in the early 1970s under Hasina’s father Sheikh Mujibur Rahman) with different conspiracy theories still swirling and circulating.

SQC, who had studied law at the University of Punjab, was himself a great politician by virtue of having been a long-time parliament member and adviser of parliamentary affairs to Prime Minister Khaleda Zia from 2001 to 2006. He was once a great candidate for the OIC Secretary General position. Despite his having been a controversial character in some ways or another (who is not in Bangladesh, from top to bottom, starting with Sheikh Mujib and his daughter Sheikh Hasina?), SQC had an entertaining charm of his own. Always polite, fluent and courteous (by the personal testimony of those who came in contact with him), his happy and humorous but sometimes somewhat (pleasantly) crude comments were far saner, wiser, and more civilized than the vulgar, fatuous, offensive, inane, obnoxious, dull and dry comments of many others belonging to the Awami court and Baksali camp. It is to be lamented that he was inhumanly tortured by Hasina’s Gopal and Gestapo police to the extent that his toenails and finger nails came off. The unbearable suffering was such that he was not even able to stand on his feet, blood dripping from his ears, as charged by his weeping daughter Farjeet Quader Chowdhury, who was full of moving tears (on the media), as any daughter would be.

Why is it that the international witnesses in SQC’s ICT case were barred from entering the country and providing testimony in what was described as an unfair and questionable trial not only by his family but also Amnesty International, Human Rights Watch, the US Congress, and many other international organizations and global war crime experts of repute? Why is it that only four witnesses were allowed for the accused (SQC) whereas as many as forty four witnesses allowed for the government prosecution? “Commenting on the trial, the former United States Ambassador-at-Large for War Crimes Issues, Stephen Rapp, said that it was ‘disturbing’ that limitations were placed on defense testimony. Affidavits stating that Chowdhury was in Pakistan and studying law at the University of Punjab at the time of the crimes were not considered. Defense testimony from a former Prime Minister of Pakistan and a former American Ambassador was not allowed by the court.”

According to the Tom Lantos Human Rights Commission report of December 1 of 2015, “Two political opposition leaders were executed in recent days, following death sentences by a controversial war crimes tribunal criticized for lack of due process.” It is precisely the same argument that Joseph Grieboski, once a nominee for the Nobel in Peace, and the UK-based Guardian Editorial made in articles, “Bangladesh Democracy Under Attack” and “Bangladesh history debate: distorted by politics,” respectively, both containing blistering criticism of the ICT. It is the same contention about the “trial standards” of the ICT being objected to at least as procedurally unfair, the weaknesses and controversies in the trial process concerning the capital punishment of many accused, and the authenticity of the statements made by the prosecution witnesses against the accused that journalist David Bergman so cogently and convincingly raises. These are fair concerns about the much trumpeted “fair trials” at Hasina’s ICT, just as there are fair concerns about the series of Hasina’s rigged and stolen elections.

People did not forget how SQC, long ago, belittled his party leader Khaleda, who, he thought, was acting under the influence of her young son Tarique Rahman. He drew an unpalatable analogy of whether it was the dog that wagged its tail or it was the tail that wagged the dog. On the other hand, compared with the frequently used rough and reckless verbal and body language of Hasina and her cronies (like Motia Chowdhury, Sheikh Selim. Hasanul Inu, Kamrul Islam, Mahbubul Hanif, and Hasan Mahmud, among others), the verbal and body language of an interesting personality no less than SQC was more well-intentioned and satirically constructive with a moral standard upheld, instead of being unnecessarily coarse and coercive. He was, after all, a senior leader, of the highest echelon of his party, the BNP, and his light-hearted offensive was later ignored and laughed away, especially in light of the fact that there was no last word in politics.

Hasina forgot Motia’s abusive ডুগডুগি/dugdugi thing and Inu’s humiliating চামড়া/skin stuff, both sneers hurled by them in bitter vilification and vituperation of Sheikh Mujib while he was still alive, not to speak of what they said later in celebration of his assassination. Hasina forgot those penetrating nails at her father because both Motia and Inu, like Khaleque Biswas of Neamat Imam’s realistic political fiction, The Black Coat, turned from being harsh critics of Mujib and his Awami League to fanatically blind followers of her .

Khaleda also forgot SQC’s wag attack. After all, unlike Motia and Inu, SQC never became a full and complete Khaleque Biswas due to his distinct, distinguishing and discriminating personality. He was never like Inu, who, far below in terms of national stature and ideological standing, is (according to the BNP leader Gayeswar Chandra Roy) a জাতীয় বেয়াদব/national thug, a Gano-Bahini জঙ্গী/terrorist, and a paid agent of a foreign intelligence (RAW, who else?).

One may again bring up here the instance of SQC. He had a distinctively funny and witty style of his own–a unique body language that might have been born of his personal pride, high-end upbringing, and deep convictions. Some may or may not have liked that, but it was his natural body language—irreverent, yet unforgettably colorful, exciting and attention grabbing. It was what and who he was, influenced or affected by his rich political and family stock of long standing. Why to be so critical of his saucy demeanor, which was not without verve and humor? His sharp retorts and repartees were part of a pungent, yet civilized and informed political dialogue, far better than the cheap and low invectives of many Awami leaders. Don’t Hasina and her men and women have their crap and crack body language with uncouth and objectionable expressions against the historic political luminaries such as President Zia, Khaleda Zia and others?

One reserves the right to protest against the awkward statements made by those in reference to SQC’s colorful body language and his charming and entertaining verbal assaults on others that actually added a needed variety necessary to complete the diversity of a democratic political class of the country. His foes may think he was, as it were, a psychopath. He simply was not. With him on board, a political party can only be fuller and more complete. He knew himself well and he had confidence in himself. On a Channel I TM program, he brilliantly made light of the negative media reports against him as if they were waters spilt over a duck, which, although it loves to swim in water, characteristically keeps clean and dry moving past what it may consider unwanted drops of water that may fall on its wings. Similarly, SQC denied his involvement in any goods illegally coming through the shipping lines he owned just as, he argued, Biman Bangladesh Airlines Managing Director might not be responsible for tons of gold smuggled in every day through the Biman flights. About the discriminatory treatment of Muslims in India and even the Muslim majority Bangladesh and the preferential treatment of the minority in Bangladesh under the RAW-guided and blindly pro-Indian Sheikh Hasina, SQC was of the view that while the Muslims were being continuously discriminated against, members of the Hindu minority were privileged to raise a big hue and cry to be favorably dealt with “justice” even if they fell on the slippery banana peel while walking in the street.

SQC, along with others, met with a tragic end for crimes he denied, doubted, and disputed at a quasi-judicial court that he considered partial, biased and prejudicial. He and others may all be forgiven for their sins, if any, and may be given by God an award-winning permanent resident status in a divinely endowed floral and riverine hillside abode of endlessly and eternally undisturbed peace and repose in the hereafter! Regarding this temporal and terrestrial world, the fact is that Hasina was supposed to get married to SQC, but for some reason the knot wasn’t tied. Once when she was making a gesture–rough and rude as usual–at SQC (in the parliament?), the latter shot back saying, “Please do not show me your hand that was supposed to wear a wedding ring from me.” Had they gotten married, perhaps it would have been a very happy “fairytale” marriage for both of them, especially for the former, and they would have been a happy couple breathing warm human passion and living happily ever! Now that one got the other (defendant SQC) killed, who knows what’s going to happen to the prosecuting “unfair” other?

(The above is a revised version of what has been said in my book, Bangladesh: Political and Literary Reflections on a Divided Country [Peter Lang, January 2018, www.amazon.com/Bangladesh-Political-Literary-Reflections-Divided/dp/1433146134], pp. 260, 286-287).