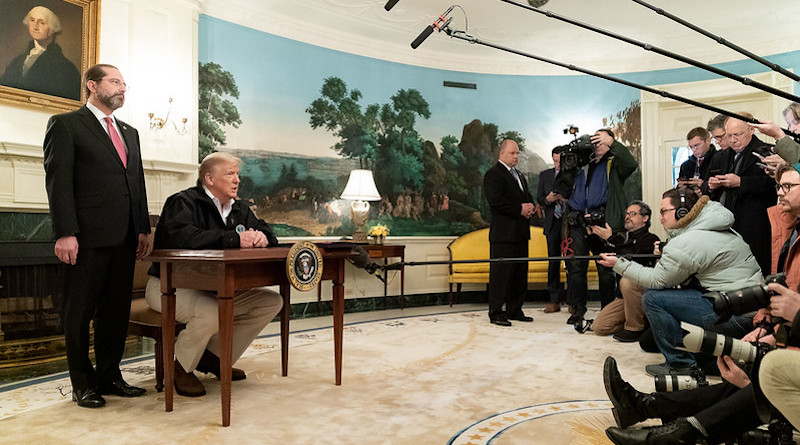 President Donald Trump signed legislation at the Friday releasing $8.3 billion in emergency spending to combat the outbreak of the coronavirus, a day after confirmation that it has spread to a suburb minutes away from the White House.

The measure provides money for possible treatments and vaccine development to help state and local governments respond to the threat.

One such local government is Montgomery County, Maryland, a suburb outside Washington that confirmed its first cases on Thursday. Maryland’s governor, Larry Hogan, declared a state of emergency after three county residents were diagnosed shortly after returning from undisclosed overseas destinations.

The funding bill includes $3 billion for vaccine development, test kits and treatments, $2.2 billion for prevention and response and $1.25 billion for global containment measures.

The funding came as U.S. officials said Friday that 245 confirmed cases and 14 deaths had been reported so far.

During his daily update, World Health Organization chief Tedros Adhanom Ghebreyesus reiterated that all countries make containment their highest priority, calling on them to find, test, isolate and care for every case.

Tedros stressed that slowing the epidemic saves lives and buys time for preparedness, as well as for research and development.

Trump is expected to visit the U.S. Centers for Disease Control in the southeastern city of Atlanta, Georgia, where top U.S. researchers are conducting research on the pathogen.

After receiving criticism about a shortage of test kits, U.S. Health and Human Services Secretary Alex Azar said Thursday one million test kits for the COVID-19 are expected to arrive this weekend at U.S. labs.

Five U.S. states — Maryland, California, Florida, Washington and Hawaii — have declared states of emergency because of the virus.

Colorado announced its first two cases of the coronavirus, a man and a woman.  Both had traveled internationally, but officials said the cases were not related.

U.S. Forces Korea said Friday that one of its workers in South Korea had tested positive for the virus, the seventh USFK employee to contract it.

Borders remained closed for a fifth day Friday along the neighboring countries of Pakistan, Afghanistan and Iran. The latter is the world’s third-hardest-hit country with more than 4,700 cases.

The closings created logjams of hundreds of vehicles full of fresh produce along the Pakistan-Iran border near the Pakistani town of Taftan and in the Balochistan provincial capital of Quetta.

“Our vehicles are loaded with fresh fruit, which is now deteriorating,” a produce transporter from Taftan told VOA’s Urdu service on Friday. “Our transport is all jammed.”

During a visit to Quetta on Friday, Pakistani Interior Minister Ijaz Shah said he was expediting the return of 2,000 Pakistani pilgrims in Iran to prevent the accumulation of visitors at the border. He said 3,000 pilgrims had previously returned home.

The Vatican reported its first coronavirus case Friday.  Spokesman Matteo Bruni said its health clinic has been closed for a deep cleaning, but its emergency room remains open.

Cameroon also has its first coronavirus case.  The minister of health said in a statement Friday the victim is a 58-year-old French male who arrived in Yaounde on February 24.

The threat appears to be waning in China, where the outbreak erupted in December. The WHO said Thursday there are about 17 times as many new cases reported outside China now than inside China itself.