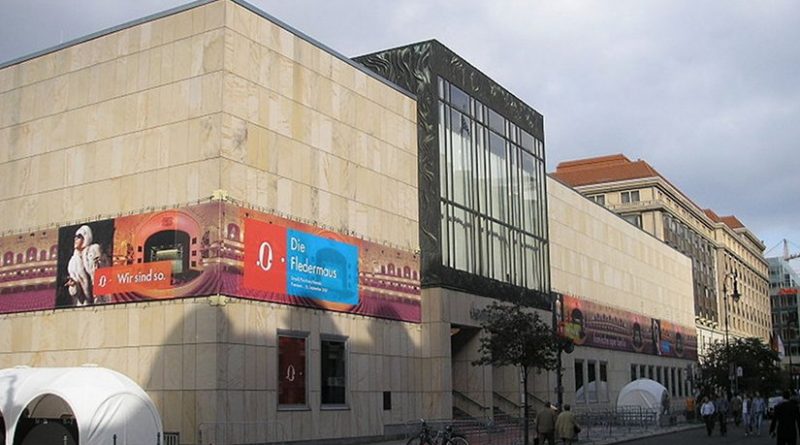 The Komische Oper in Berlin. Photo by Gryffindor, Wikipedia Commons.

We entered the “Komische Oper” in Berlin on a Friday night late in March,  showed our internet tickets in paper print at the door and left our coats in the lobby. We found our places and were seated. The audience population consisted mainly of middle-aged people. More reasonably priced back seats were filled with young people. A digital translation service was provided on the small screens behind the seats. You could follow in English, French, Russian, and Turkish translations as you wish. Light white wine, beer and other alcoholic beverages were served at the lobby bar.

The opera building was completed in 1896. Opera had repertoire with musical performances of German operettas for many years, initially with a total capacity of 1,700 spectators. At the end of World War II, the opera house was bombed and turned into a ruin. Then the house was on the east side of Berlin. It was repaired after the war. There have been many repairs to date. The orchestra venue has been enlarged. Today 1,200 spectators can enjoy the music at the city center. It is a pleasant large comfortable space. The other two operas in Berlin are playing classic works.

The original work was in French, but was played here in German. There was an occasional English-Spanish dialogue. The staging was very different and new. Intermediate cinema projection images were used. The “Beautiful” movie (Javier Bardem) poster was hanging on the left pan which was uploaded with a special message.

The director (Sebastian Baumgarten) had brought the Opera to the East Berlin location of the 1950s. The soldiers in the original were gone, now we had the male macho staff of the “Santander” supermarket. The rear-end looked like mass housing of the East German era. The hot women who work at the supermarket had come to the scene.

Carmen (Karolina Gumos) had stabbed her opponent other woman. She was seducing the small rank corporal Don Jose (Timothy Richards) in the US army.

In the second stage, the with same background, a nightclub emerged. There were Karl Marx, Lenin show puppets around for demonstration on the third stage. The final stage was at the entrance of the arena where the bullfights were held. At the end there was an unpleasant rape and murder scene. There were four stages and one pause.

There was a flamenco show between the curtains with two guitars and a female dancer. Toreador Escamilyo character was performed by a Turkish opera singer (Kartal Karagedik). We watched the opera delightfully in the spacious, high-ceilinged, comfortable armchairs.

While leaving the Opera house, at the exit gate, we got our little chocolate packets as courtesy. Most of the viewers got on their bicycles and pedaled to their homes. We got to Alexander Platz by the T100 bus, then we reached our house by U5 metro. It was a lovely evening.