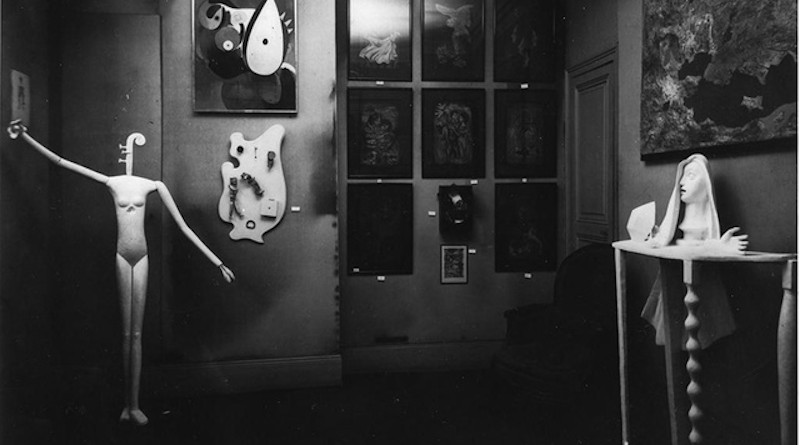 Famed Swiss artist Alberto Giacometti destroyed many of his own works and lost countless others. Using photos of his mythical Parisian studio, his namesake institute has reconstructed some of these forgotten and little-known sculptures.

The room where Giacometti set up home with his brother Diego in 1926 is miniscule. A mere 24m2 on the ground floor of a house on rue Hippolyte-Maindron in Paris, it had no toilet or running water. Water had had to be fetched from outside. Alberto slept on a small bed at the back of the room, while the younger Diego made do with the mezzanine.

In 1948, Swiss photographer Ernst Scheidegger paid the artist a visit.

“Alberto’s cramped and crowded studio […] where he had been working for 20 years, had no comforts, but every object, every inch of wall space carried signs of his work,” Scheidegger wrote in his book, Traces of a Friendship. “If Alberto was away […] he was usually in one of two cafés located at the intersection of Rue Didot and Rue d’Alésia, where bank branches stand today. There he would eat hard-boiled eggs and ham and read the newspapers.”

The studio disappeared after Giacometti’s death in 1966. But in 2018 the Giacometti Institute in Paris recreated it in the same neighbourhood in Montparnasse.  Visitors can picture the artist going from one creation to another, reading the Gazette littéraire on his mattress, smoking, sketching a face on the walls, then working some more.

But where to store all these works? There simply wasn’t enough space. So Giacometti “sometimes moved, threw away or destroyed older works to make room for new ones,” says Christian Alandete, artistic director of the Giacometti Institute. The artist stored pieces at friends’ houses, in galleries and sometimes would forget to retrieve them.

“Distrutto” and “perduto” are words that appear in his journals. Was the genius artist Giacometti a lousy curator, incorrigibly absent-minded, or someone who was never satisfied – someone for whom the work was never finished?

In truth, the Swiss was not against documenting the body of his work, since he invited photographers, including Man Ray, to immortalize his studio.

It is thanks to these photos that today curators can take stock of Giacometti’s lost works. One image taken by Man Ray at a surrealism exhibition in 1933 shows a woman whose upper body is a violin. This work is now lost. At the time Giacometti was still largely unknown; the magazine Vu had just published an image of “The Bird Silence”  with a bird flapping its wings inside a cage. This creation, like so many others that were documented in photographs or the artist’s journals, has also disappeared.

Intrigued by the mystery of these lost creations, the Giacometti Foundation, caretaker of the artist’s works, began looking into disappeared works dated 1920-1935.

“Back then, Giacometti was more interested in artistic research than in preserving his work,” says Alandete. The artist kept journals and even drew up a list of his works for his first major exhibition in New York.

But this inventory is “riddled with errors”, says Michèle Kieffer, curator of the show “In search of lost works”.

In short, Giacometti was a genius but also a “negligent archivist”, as the newspaper Le Monde puts it. The artist lost track of some of his creations. He destroyed many others, before reconstructing them. Some works were also damaged, like his “Composition” in clay from 1927.

“His financial difficulties may have prevented him from always seeking out a moulder” to make a plaster version, says Kieffer. And clay is highly breakable.

The sculptor was not afraid to throw out damaged pieces, like the piece titled “Little Man”, which was inspired by African art and was pictured with its creator in a photo from the 1920s.

“Broken and destroyed long ago, and I regret it, I think sometimes of redoing it – it was my first piece,” he wrote later in a letter to gallery owner Pierre Matisse.

“After we’d had our coffee, I came back to the garden with Giacometti,” Bunuel wrote in his memoirs. “No giraffe. It was gone, without explanation.”

“Was it deemed too scandalous after the scandal of the Golden Age?” wondered Bunuel, referring to his first feature-length film.

For fans of the famous creator of “The Walking Man”, regret and mystery abound. The photographs and scribbles in Giacometti’s journals give them an idea of what works have been lost. But the Giacometti Institute wanted to go further by reconstructing some of the sculptures in three dimensions. In this way “The Mannequin”, shot by Man Ray, and “The Bird Silence” come to life, unsigned – of course – by the artist.

Due to the coronavirus pandemic, the show “In search of lost works” at the Giacometti Institute in Paris has been closed until further notice.