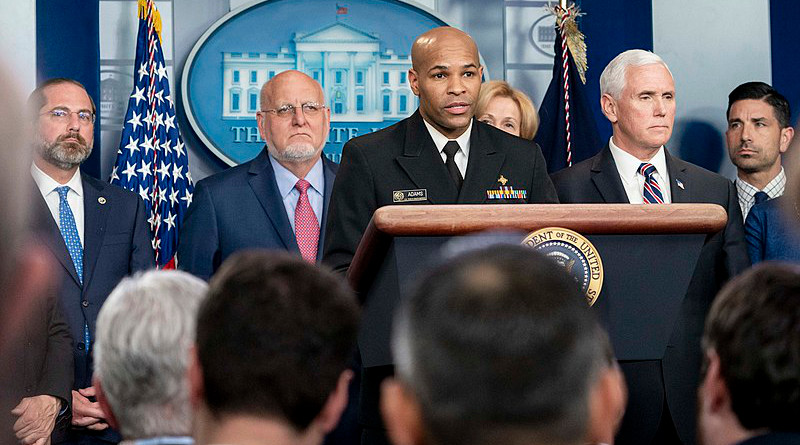 Top U.S. health officials warned Americans on Sunday that the United States will face a shocking coronavirus death toll in the coming week as the pandemic continues to ravage the country.

Dr. Anthony Fauci, director of the National Institute of Allergy and Infectious Diseases, said bluntly on CBS’s “Face the Nation” show, “This is going to be a bad week. It’s going to be shocking to some.”

The U.S. has already recorded more than 9,100 deaths and 321,000 confirmed cases of coronavirus, with officials predicting that eventually 100,000 to 240,000 could die from the pandemic. Models of the advance of the virus show the death toll increasing sharply in the next seven to nine days, with the fatalities often lagging increases in the number of confirmed cases by a week or two.

“I wouldn’t say we have this under control. We are struggling to get it under control,” Fauci said, despite orders in 41 states covering more than 90% of the country’s 327 million population to stay home except to buy groceries, keep medical appointments and a few other essential outings.

Despite the sharp expected increase in the death toll in the coming days, Fauci said he expects that in eight or nine days, “hopefully we’ll see” a leveling off and then a decrease in the number of confirmed coronavirus cases.

“We’re pushing to get it much better under control,” he said. “It’s clear we’re much better off than we were,” with more testing in the U.S., more adherence to stay-at-home edicts and more tracing of contacts with other people by those who have tested positive for the coronavirus.

President Donald Trump, however, has refused to issue a nationwide stay-at-home edict, saying he would leave it up to the remaining nine state governors who have not issued such commands in their states to decide whether they should order people to stay home.

Fauci said the people in the nine states are “putting themselves at risk” by not self-isolating even if their governors have not issued stay-at-home orders.

“This virus does not discriminate” whether one lives in a small community or a large city,” Fauci said.

Adams told the nine governors, all Republicans like Trump, “What I would say to those governors is, if you can’t give us a month, give us what you can. Give us a week” with a stay-at-home order. “Give us whatever you can to stay at home during this particularly tough time when we’re going to be hitting our peak over the next seven to 10 days.”

Adams said he wants the public to know that they, along with the state and federal governments, “have the power to change the trajectory of this epidemic” by isolating and maintaining a physical distance of at least two meters from other people when they are in public.

Trump has often said that he believes the use of anti-malarial drugs to treat coronavirus victims might be a “game-changer,” although the drugs have not been confirmed scientifically for use against coronavirus.

Adams defended Trump’s support for use of the unproven drug called hydroxychloroquine to treat the coronavirus, noting there have been “some stories out there” about it helping coronavirus patients.

“We feel a bit better regarding its safety than we do about a completely novel drug,” Adams said. “And so, we just want to be able to facilitate physicians and patients having that conversation.”

Fauci said “the data [about hydroxychloroquine] are at best suggestive. In terms of science, it’s not proven.”