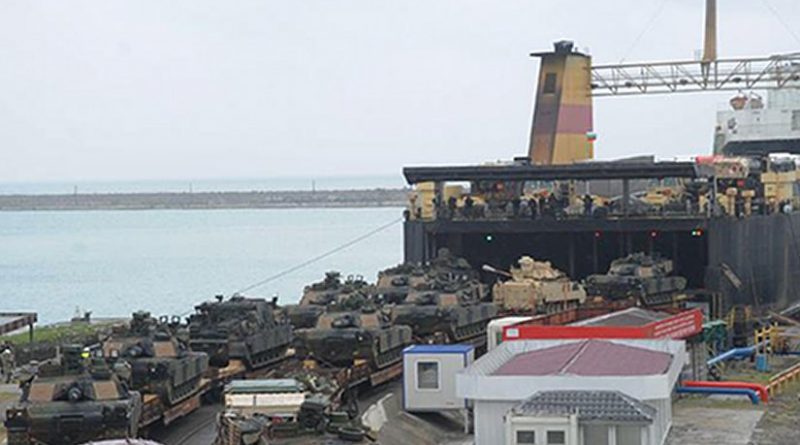 U.S. Army’s M1A2 Abrams main battle tanks and Bradley infantry fighting vehicles being unloaded from ferry in the port of Poti, May 4, 2016. Photo via Civil.Ge

(Civil.Ge) — U.S. military equipment, among them M1A2 Abrams main battle tanks and Bradley infantry fighting vehicles, were delivered via ferry from Bulgaria to Georgia’s Black Sea port of Poti on Wednesday for annual joint military exercises, which will start next week outside Tbilisi.

The military equipment was then shipped by rail from Poti to Vaziani training area, east from the Georgian capital, where the second annual Noble Partner exercises will be held on May 11-26 with the participation of 500 Georgian, 650 U.S. and 150 United Kingdom service members.

Last year the U.S. Army Europe shipped Bradley infantry fighting vehicles to Georgia for the inaugural Noble Partner exercises – it was the first time the U.S. Army deployed a mechanized company worth of equipment across the Black Sea. This year’s exercises marks the first time when the U.S. army tank company takes part in drills in Georgia.

Just before the military equipment was loaded on ferry in Bulgarian port of Varna, Commander of the U.S. Army Europe, Lt. Gen. Ben Hodges, visited Georgia on April 28.

“We also came here to demonstrate to Georgia… that we are committed to working with Georgia, to continue work improving interoperability. We have an exercise coming up – Noble Partner. The U.S. army tank company will come across on a ferry from Bulgaria, so I wanted to see what the facility looks like,” he added. There was no mention at the time that the U.S. military equipment was going to be shipped in port of Poti.

Like last year, paratroopers from the 173rd Airborne Brigade will also take part in the drills from the U.S. side.

According to the Georgian Ministry of Defense, the U.S. Air Force C-130 transport aircraft will also be involved in the exercises.

The Georgian MoD said that the Noble Partner exercises aim at Georgia’s training for its contribution of a light infantry company to the NATO Response Force (NRF).