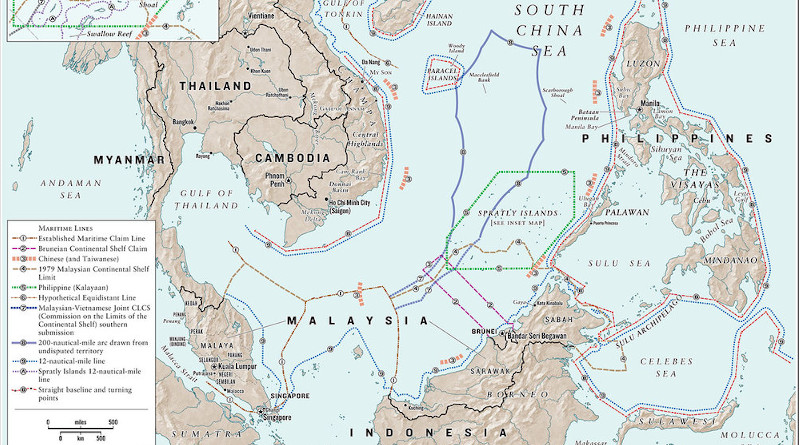 As the situation in the South China Sea trends toward a new normal of frequent clashes, analysts are heaping blame on China.  But it is important to remember that China’s claims, policies and actions are but the tip of an iceberg of claims that are based more on fancy than validity.

Let’s start with sovereignty claims to the tiny rocks and reefs.  China (including Taiwan) and Vietnam have sweeping claims to sovereignty over all the features in the South China Sea based on discovery and usage “from time immemorial’. https://www.eastwestcenter.org/publications/sharing-resources-south-china-sea

While this may sound like nationalistic hyperbole, others have equally imaginative and  nationalistic justifications for their claims.  The Philippines claims some of the Spratly features based on a 1978 Presidential Decree annexing the area.  That decree declared that they belong to the Philippines based on their being near the Philippines and that they are vital to the country’s security and economic survival.   It also points to their ‘discovery’ and acquisition in 1956 by one Tomas Cloma who declared the islands to be the micronation of Freedomland. https://en.wikipedia.org/wiki/Free_Territory_of_Freedomlan Malaysia claims twelve features based on discovery and the unusual theory that the features sit on its claimed continental shelf.

Under modern international law, a successful claim to sovereignty requires demonstrably continuous, effective administration and control, and acquiescence by other nations.  None of the claims meet these criteria.

Also, sovereignty claims to Spratly features that are submerged at high tide were invalidated by an arbitration panel that reaffirmed this UN Convention the Law of the Sea (UNCLOS) rule.  So all claims to sovereignty over submerged features – artificially built up or not – are invalid.  Yet China (including Taiwan), Malaysia, the Philippines and Vietnam maintain such claims.

The Paracels are a separate island group to the northwest of the Spratlys and claimed only by China (including Taiwan), and Vietnam.  They have been occupied by China since 1974 when it took them by force from then South Vietnam.

China’s sovereignty claims to features that are above high tide in the South China Sea are just as valid– or as weak– as those of the others.

All the claimants have ratified UNCLOS which sets out the rules for claiming maritime space and the resources therein. The epitome of extreme claims is undoubtedly China’s ‘historic’ nine-dashed line to most of the Sea and its resources.  This almost universally criticized claim has been rejected by an international arbitration panel as incompatible with UNCLOS .  And neither China nor its rival claimants can fall back on claiming 200 nautical miles (nm) Exclusive Economic Zones (EEZ) or continental shelves from the Spratlys because the same panel also ruled that none of the Spratly features can generate such zones.

But many of the rival claims to China are also incompatible at least in part with UNCLOS.  All legitimate maritime claims are measured from baselines – and for them and the claims extending from them – to be legitimate, they must be measured from the coast.  However if the coast is ‘deeply indented or has fringing islands,’ ‘straight baselines’ can be drawn along the coast.  Many South China Sea states claim straight baselines that markedly –and in the U.S. view –illegally extend their maritime zones far out to sea.

This includes Malaysia’s straight baseline off West Sabah running through Pulau Mengalum , some 35 miles from its coast, and the most extreme of illegal baselines in the region, that of Vietnam, which connects an island about 80 miles off its coast.  Brunei also illegally claims an EEZ extending from a rock – Louisa Reef – some 150 miles off its coast.  China has declared baselines enclosing the Paracels and that too is contrary to UNCLOS.

In addition to these questionable claims, many claimants in the South China Sea have unilaterally imposed regimes in their maritime zones that are contrary to UNCLOS.

China (including Taiwan) and Vietnam have regimes requiring prior notification for foreign warships to enter their legal 12 nm territorial seas which extend from claimed baselines along their coasts and from their claimed rocks in the South China Sea.

Some have even more controversial claims regarding activities in their EEZs.  For example, in its EEZ, China has regulations criminalizing foreign survey activity without consent and also claims jurisdiction over airspace above its EEZ.  But its EEZ regime claims are not the most extreme.  That dubious distinction falls to Malaysia which requires prior consent for foreign military exercises or maneuvers therein.

The coastal states are not the only ones that may be violating UNCLOS and international law in the South China Sea.  The U.S. frequently challenges claims it considers contrary to UNCLOS with so-called Freedom of Navigation Operations (FONOPs). As a senior US naval officer once put it, FONOPs are ” _ an  in your face, rub your nose in it operation that lets people know who is the boss”.  https://icps.gwu.edu/sites/g/files/zaxdzs1736/f/downloads/Etzioni_Freedom%20of%20Navigation%20AFS.pdf

China views US FONOPs as ‘gunboat diplomacy.’    Given that US FONOPs are directed against certain claims of almost all South China Sea coastal countries, this perception is not confined to China.

These operations are even considered by some to be violations of the UN Charter – – let alone UNCLOS itself because in their eyes they threaten to use force as an instrument of foreign policy. https://thediplomat.com/2017/10/are-us-fonops-in-the-south-china-sea-necessary/

More problematic is that the U.S. has not ratified the Convention that it unilaterally interprets and enforces to its advantage.

China also argues that that some US military activities in its EEZ are a non-peaceful use and an “abuse of rights” prohibited by UNCLOS.  It claims that they are unnecessary or arbitrary exercise of rights, or interference with the exercise of rights by another state.  China also claims that they violate the UNCLOS stipulation to pay ‘due regard to the rights and duties’ of the coastal state. https://www.researchgate.net/publication/46487698_Guidelines_for_Navigation_and_Overflight_in_the_Exclusive_Economic_Zone We will likely never know whether or not these activities are compatible with UNCLOS because the U.S. – as a non-ratifier – cannot avail itself or be subjected to its dispute settlement mechanisms.

The point is, the next time one country accuses another of illegal claims and activities, one should consider that there are no angels in the South China Sea.  All actors are probably guilty of some infraction of UNCLOS.  Who is the most egregious violator of UNCLOS at any given time in the South China Sea depends on whose ox is being gored.

Home » The South China Sea: Fantastic Maritime Claims And Where To Find Them – Analysis