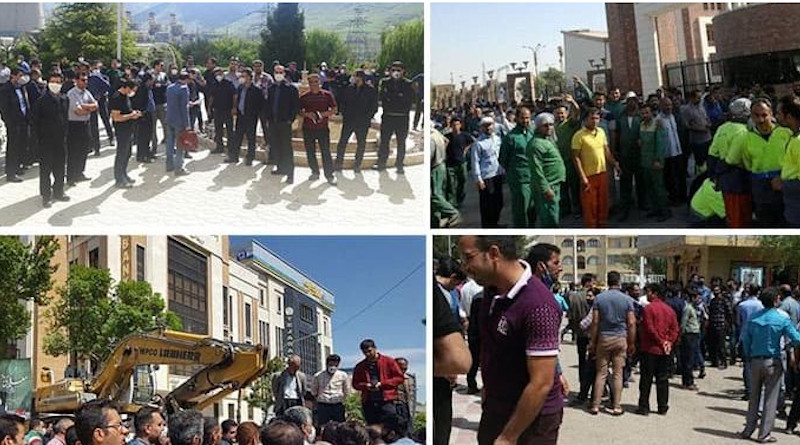 Thousands of Iranian workers expressed their economic grievances in protest gatherings across the country.

According to the state-run ILNA News Agency, about 3,500 workers of the Kerman Coal Mining Company in southeastern Iran took strike action yesterday and today.

The protesters said that provincial officials promised to see to their demands by April 29 during their last strike action on April 20.

They wanted the decision to transfer the shares of the mining company to the private sector to be annulled.

The workers are also calling for the implementation of the Classification of Occupations Plan, an increase in wages in accordance with various job titles and work experience, and the payment of other benefits.

They said that despite some of them having 20 years of experience working underground, they only received 2 million and 700 thousand tomans, around $168.

“This wage is not compatible with the hardships of this job and the threats to workers’ lives,” the workers told ILNA.

Earlier, on April 20, the Kerman Coal Mining Company workers gathered in three cities including Ravar, Kuhbanan, and Zarand to protest the company managers’ decision to transfer company shares to the private sector. The workers gathered outside the offices of the head of Friday prayers in these cities.

ILNA reported that about 50 municipal workers in Kut Abdollah gathered outside the Khuzestan Governor’s Office in Ahvaz, southwestern Iran to demand their unpaid wages.

They say they have not received their wages since February and have outstanding paychecks from the last (Persian) year.

“Last year, we protested several times outside various government agencies to determine the status of our requests,” the workers told ILNA.

They said that around 250 municipal workers had two and a half months of unpaid wages.

Also in Ahvaz, workers of the National Iranian Drilling Company gathered on Monday to protest the dismissal of workers.

According to protesters, 100 workers have been laid off and another 500 are to be fired in the future.

Iranian teachers of the Literacy Movement Organization gathered outside the parliament in Tehran on Monday to demand that they not be forced to participate in teaching university entrance exams.

According to ILNA, the large number of demonstrators said that discrimination between them and other teachers seeking to enter teacher universities should be eliminated.

On May 3, farmers and locals in Chaharmahal and Bakhtiari Province in southwestern Iran protested the stealing of their water sources by regime elites.

They said that large tunnels had been made in their water sources directing their much-needed water to the central province of Isfahan where it is used by factories affiliated with regime elites.

On May 3, workers of the combined cycle power plant in the western city of Sanandaj took strike action to demand their unpaid wages.

Around 250 workers have not received their paychecks or have received partial wages.

Several Iranian socio-economic experts affiliated with the regime have warned that the dire living conditions of Iranian workers would lead to violent protests in the future.