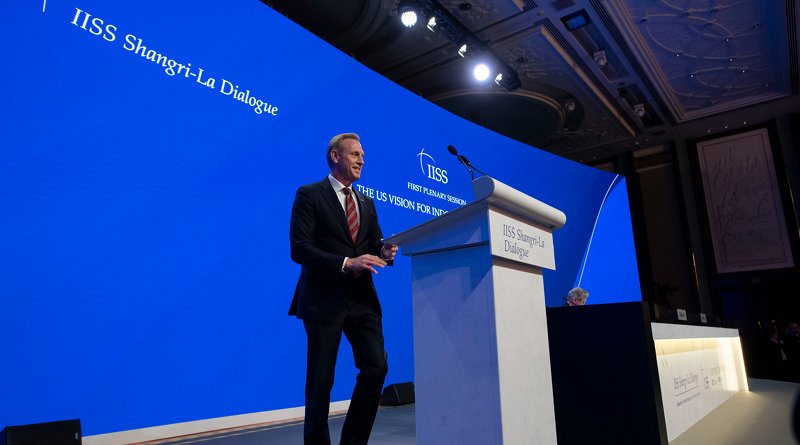 US Acting Defense Secretary Patrick M. Shanahan at the 2019 Shangri-La Dialogue in Singapore. Photo Credit: US Department of Defense

(FPRI) — Each year since its founding in 2002, high-ranking officials of Asian-Pacific states gather for what is billed as the area’s premier defense summit to debate the region’s most pressing security challenges and, according to its website, “come up with fresh solutions together.” Named for the Singapore hotel in which delegates assemble, rather than the mythical Himalayan utopia of James Hilton’s Lost Horizons, the summit attracts attention more for the grievances being aired than for any solutions achieved.

This year’s iteration attracted special attention since, for the first time since 2011, China agreed to send its defense minister. At the close of the meeting eight years ago, Beijing accused the United States and Japan of ganging up on the People’s Republic in order to impose their vision of world order, and only lower level Chinese officials attended thenceforth. It is not clear what Xi Jinping’s reasoning was for this change of heart, since the states Beijing perceived as ganging up on China have not become more complaisant. Although the surface appearance of Sino-Japanese relations has improved, each country has expressed continuing concern over the military posture of the other, and each has reinforced its defenses accordingly. China and the United States are in an ongoing bitter trade dispute, and tensions in the region concerning contested territorial claims, trade imbalances, and fishing rights continue unabated.

For better or worse, the conference organizers, London’s prestigious International Institute for Strategic Studies (IISS), decided to bookend the major speakers, putting Acting United States Secretary of Defense Patrick Shanahan in the first plenary session and PRC Defense Minister, General Wei Fenghe, in the last. For those who had hoped for red meat, neither man disappointed. Although Shanahan stumbled over his words as if reading the speech for the first time, there was no mistaking the meaning of the address. Tacitly rebutting previous Chinese charges that the U.S. is not part of the region, he emphasized that America is a Pacific nation geographically and has important economic interests in the area as well: its annual two-way trade in the Indo-Pacific is $2.3 trillion, and its foreign direct investment, at $1.3 trillion, is more than that of China, Japan, and South Korea combined. The Indo-Pacific is America’s priority theater of strategy, and its presence has helped create an unprecedented 70 years of relative peace and rising prosperity.

However, Shanahan continued, “some in the region” are behaving contrary to the principles and norms that undergird this situation. Using what he called a toolkit of coercion, they have deployed advanced weapons systems, used influence operations to interfere in the domestic politics of other nations, undermined the integrity of elections, engaged in predatory economics and debt for sovereignty deals, and promoted theft of other nations’ military and civilian technology. Coral reefs have been dredged and destroyed with disastrous ecological and economic consequences, fishermen are denied access to waters their ancestors have fished for generations, freedom of navigation and international overflight has been restricted, and religious practices are being suppressed. Should these trends continue, features in the global commons will become “tollbooths.” Calling for other countries in the region to work together with the United States to resist such predatory practices, Shanahan also affirmed America’s determination to support the right of the people of Taiwan to determine their own future free of coercion.

Although he ignored a lengthy discourse on China’s Belt and Road Initiative thinly disguised as a question, Shanahan parried other questions skillfully, denying that he was being confrontational and saying that the U.S. could no longer ignore Chinese behavior or “tiptoe” around it. Huawei was “too close to the Chinese government” for the U.S. to trust its telecommunications security to the company. An open and genuine dialogue was needed, with two issues – counter-terrorism and maritime domain awareness – prime areas for cooperation.

Defense Minister Wei, wearing his military uniform, laid out Manichean choices between openness and inclusiveness versus isolation and exclusiveness; between win-win cooperation or a zero-sum game; and mutual learning among civilizations or arrogance and prejudice, leaving no doubt that he thought China favored the former and the United States the latter. The PRC had developed its military entirely for self-defense, and its expenditures thereon were “reasonable and appropriate.” The Chinese military was dedicated to safeguarding national sovereignty, security, and development interests. China’s construction on South China Sea islands and reefs was the legitimate right of any sovereign state. Just as the United States is indivisible, so is China, and therefore it cannot tolerate the secession of Taiwan. It is the United States, not China, that threatens security and stability in the South China Sea; countries “outside the region should not intervene…make troubles, walk away and leave a mess behind.”

Wei’s responses during the question and answer segment tended to reiterate the points made in his prepared talk: the areas claimed by China are China’s, and the PRC’s security demands that they be defended. Terrorism is a common enemy, China is a victim of terrorism, and has to defend itself with regard to terrorism in Xinjiang and elsewhere. Wei invited foreigners to come to Xinjiang to see for themselves how peaceful and stable the region is. As for the South China Sea construction activities, China “had” to defend itself against “some other countries.” Huawei is a private company and China is opposed to sanctions against private companies. China had been “forced” to take action against counterrevolutionary demonstrators in 1989. It had no intention to, as has been rumored, establish a military presence in Cambodia, the Arctic, or the Antarctic. Beijing did not seek to displace the U.S. in the world order, but rather to cooperate with it in a shared future of prosperity for all mankind. Wei did not address questions about arms control or cybersecurity.

France’s defense minister emphasized her country’s right to be in the region, given its economic interests and possessions in the Pacific, with their 1.6 million inhabitants; she joked that there was a friendly rivalry between France and the United Kingdom as to which of them had sent more frigates to the area. Behind the levity was a more serious issue, since China has objected to the presence of foreign navies therein. Japan’s defense minister, perhaps wanting to avoid disturbing the fragile détente with the PRC so close to the G20 meeting in Osaka, delivered an anodyne speech on the need for international cooperation against North Korean nuclearization; and the Malaysian minister took refuge in such time-honored topics as the need to deal with non-traditional security risks like piracy, the plight of refugees, and the disruptive effects of great-power rivalries.

A Hong Kong newspaper noted that coverage of the Shangri La meeting within China was tightly controlled. Domestic media had been advised not to run Shanahan’s speech, and the Chinese had successfully negotiated with the IISS to ensure that, of the twenty people chosen to ask Wei questions, none represented American institutions. By contrast, a Chinese general had been allowed to ask the U.S. Secretary of Defense a question. Wei’s replies had been unsatisfactory, the paper continued: there is a difference between responding to a question and answering the question. Surprisingly, since the newspaper, the South China Morning Post, is generally thought to be accommodative to Beijing’s wishes, the article described these actions as undermining China’s efforts to show openness. SCMP’s reporters quoted an analyst, clearly dissatisfied with the IISS’s decision to agree to Beijing’s rules, as stating delicately but pointedly that managing Chinese participation at the forum “would be a challenge for the organizers in the future.”

The conference closed with remarks about the value of such dialogues, even though actions taken outside Shangri La while the dialogue was in session were not encouraging. As delegates were arriving in Singapore, Australian media reported that its military pilots had been hit with laser beams believed to come from Chinese maritime militia, whose boats were followed at a discreet distance by a Chinese warship. The incident occurred even though the Australians’ route did not take them near any feature occupied by Chinese forces or any obviously sensitive area. Separately, U.S. Chairman of the Joint Chiefs of Staff Joseph Dunford urged that any future Chinese expansion in the area must be checked with a collective response.

Given the close proximity between the date of the conference and the 30th anniversary of the June 4th massacre at and around Tiananmen Square, photographs of the carnage and speeches denouncing the actions of Beijing’s former leaders tended to overshadow Wei’s contention that the government had been forced to take action. Other events, too, seemed to undermine the intent of the Shangri La gathering. On the day the forum ended, the U.S. Department of Defense released its Indo-Pacific Strategy Report, which explicitly accused China of “seek[ing] Indo-Pacific regional hegemony in the near-term and global preeminence in the long-term.” One day later, China announced training exercises in the South China Sea, signaling it would “resolutely take action” to defend its claims there. And, in what was either a calculated signal or a disastrous failure of timing, Chinese warships appeared unannounced in Sydney harbor on the eve of June 4th, while the Australian prime minister was wrapping up a trip to the Solomon Islands, designed to shore up Australia’s presence there and counter Chinese influence. Either way, and later explained as routine, the visit demonstrated that the PRC meant to maintain a strong presence in the area.

So far, these are just words and posturing. Each side has staked out its claim, and they are clearly far apart. What actions will be taken to either back up their respective claims or narrow the differences between them remains to be seen.

The search for fresh solutions goes on.

*About the author: June Teufel Dreyer, a Senior Fellow in the Asia Program at the Foreign Policy Research Institute, is Professor of Political Science at the University of Miami, Coral Gables, Florida.

Home » The 2019 Shangri La Dialogue: Not Quite The Land Of Peace And Harmony – Analysis