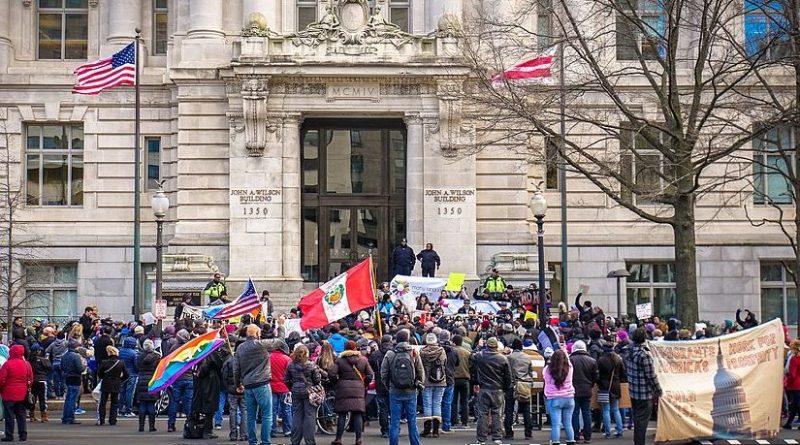 "A Day Without Immigrants" demonstrators in front of the John A. Wilson Building in Washington, D.C. Photo by Ted Eytan, Wikipedia Commons.

The 67 million domestic workers worldwide are the unsung heroes of globalization making the wheels of the economy turn, but increasingly the migrants among them are objects of hostility. Most domestic workers are women, according to the International Labour Organization, and 17 percent, or 11.5 million, are migrants – part of the migration phenomenon of care, triggered by a swelling middle class and globalization. These workers perform household-bound chores including cleaning and cooking, eldercare and childcare – tasks deemed unskilled by the host country and rejected by most citizens of the local population.

Stories of disempowerment and exploitation are common even in developed nations, and cross-border relationships limit ability to communicate, develop family ties and friendships, obtain legal status, or report abuses to the authorities. Countries that typically constitute a larger base of domestic workers include Singapore, Hong Kong, Israel, Canada, Denmark, United Arab Emirates and Taiwan – with significant variations in hiring practices and pay differentials.

Some workers pursue positions that promise substantial wages for their families, and others are simply vulnerable. Alex Tizon, for the Atlantic, described growing up in a Filipino family that immigrated to the United States with their unpaid servant whom they alternately described as an aunt and grandmother. For most of her life, the woman worked dawn to dusk without pay or the privacy of her own room. Tizon’s story poignantly details how informality – and discourse of domestic worker as family member – can lead to ambiguity, unprofessionalism and abuse. Precisely due to the casual boundaries of residence and employment space, domestic workers around the globe are often caught between tolerating unfair practices as “part of the family” and working for a fair and just employer.

Policies in Singapore, Canada, Hong Kong, Taiwan and the United Arab Emirates likewise limit domestic workers from flexible labor market arrangements. Workers have little recourse in removing themselves from an employer to which they have been assigned and little opportunity to seek new jobs in the host country. Ultimately, the employer controls the worker’s movement, preventing the ability to change jobs or negotiate better wages and work conditions.

Narratives collected in Singapore suggest that exploitation is common. Hiring practices are inconsistent and often informal. Agents advertise foreign women as employable and obtain visas specifically tied to the nature of the labor. Some workers take on loans ranging from Singapore $2000 to $5000 to find jobs then work six months or more to pay off agencies and middlemen. Many workers fear speaking up or engaging in social action to secure rights, especially those trying to pay off such debts and send remittances to struggling families. Instead, they endure exploitative conditions in silence. The imbalanced power relationships between employer and employee reinforce servitude and class differences.

The workers depend on their employers upon arrival. Many describe confiscation of mobile phones, passports, contracts and other documents, savings and belongings. Their ability to communicate with families or meet with other domestic workers, is constrained; they are expected to stay close to the home, ready to serve, not be seen or heard, as revealed by the experiences of Maria Luisa Cuizon of the Philippines. Initially paid for domestic work, she then reported being illegally deployed to deliver food up to 17 hours a day over two years for her employer without pay.

Lack of social networks and the invisibility of labor, inequality between workers and employers, contribute to abuse and horrific work conditions. Domestic workers report feeling trapped, locked up psychologically and physically, for months and even years. Workers describe confinement, surveillance, lack of access to phones and warnings about straying beyond their immediate surroundings. Many assume that abuse is part of the job.

A few do escape. An Indonesian woman fled using the rubbish chute in a Singapore highrise. A Filipina woman  leaped out of the window after having bleach poured on her arms. Some try suicide.

Despite having enough education to engage in formal economies in their home countries, many workers, including parents, succumb to promises of higher pay in advanced economies – up to five times as much as what they could earn at home. Some are lured by tales of life-changing encounters, rare stories of success that depend on benevolent employers. Others select places like Singapore as an employment destination, seeking regulations and safety standards.

Work conditions and hiring practices are inconsistent from country to country and home to home. Even governments in the most developed nations struggle to monitor thousands of workers and signed contracts that stipulate rest hours, sleeping arrangements, allocation of days off, food provisions and salaries. Domestic work is in the realm of the private. So, workers consistently describe employers flouting contracts with food deprivation or options that include leftovers, stale bread and instant noodles. A day off can be reduced to a few hours off.  Depending on the employer’s space, sleeping arrangements range from a private room, at best, to a mat in a kitchen or storeroom. Protections are near impossible to enforce, and governments tend to rely on complaints.

Typically, international NGOs including Human Rights Watch have been the largest critique of countries in the Gulf that employ domestic workers. Most countries offer helplines, and to a lesser extent, local NGOs offer support. The Humanitarian Organization for Migration Economics, or HOME, based in Singapore since 2004, aids disenfranchised domestic workers who find themselves in substandard working conditions. The NGO publicizes cases of mistreatment and abuse including starvation; physical, verbal and sexual abuse; unpaid salaries; and unfair deportation by employers. Awareness of NGO helplines can be a lifeline. Researchers working with domestic workers at HOME have documented stories of taxi drivers and experienced domestic staff directing distressed workers to helplines and centers.

Social networks and alert members of the public are key to domestic workers understanding their rights and taking steps to walk away from abusive work.

Local NGOs document cases of abuse and indications of human trafficking during recruitment. At the international level, Human Rights Watch and the ILO monitor mistreatment, too, essential in countries where NGOs are rare like the United Arab Emirates, Qatar and Saudi Arabia. Reporting of the most severe abuses spur new regulations and oversight, gradually contributing to improved conditions for domestic workers. The National University of Singapore continues to conduct research on domestic workers in Singapore, relying on the Center Culture-Centered Approach – a process that provides spaces where workers can articulate their experiences, identify structural inequalities and communicate about these experiences to direct social change. Two nationwide campaigns in Singapore, “Respect our Rights” and “We are Humans, too,” identified the everyday challenges for such workers. Domestic workers and researchers crafted campaign messages about basic human rights and the punishments for violations – seeking to educate both workers and employers and change attitudes towards domestic work.

Still, labor emulating enslavement exists in developed and undeveloped nations. Respecting worker rights is a key step toward change. More protections – building widespread awareness so that ordinary citizens can be on the lookout for abuses, national labor laws targeting domestic work, greater scrutiny of employment practices and eliminating the debt burden for vulnerable workers – are required.

*About the authors:
Satveer Kaur-Gill is a 2016-2017 Fox Fellow with Yale University and an ethnographer, largely focused on domestic worker experiences in Singapore.

Professor Mohan J Dutta is Provost’s Chair Professor and head of the Department of Communications and New Media at the National University of Singapore (NUS), adjunct professor at the Interactive Digital Media Institute (IDMI) at NUS, and courtesy professor of communication at Purdue University. At the National University of Singapore, he is the founding director of the Center for Culture-Centered Approach to Research and Evaluation (CARE), directing research on culturally-centered, community-based projects of social change.

CARE produced a documentary to highlight the challenges.