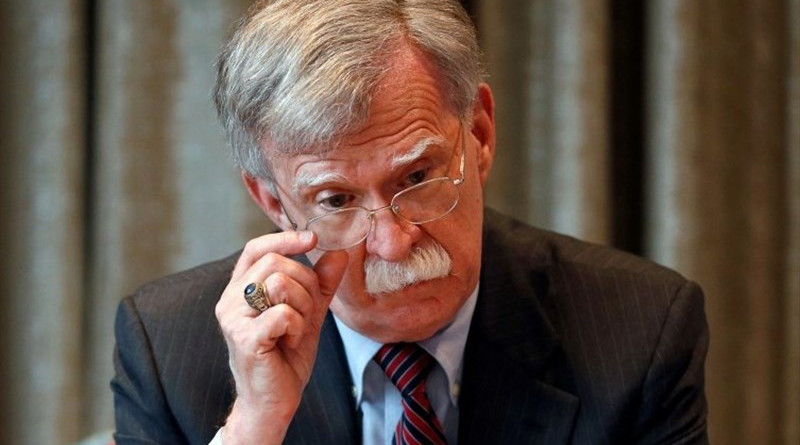 John Bolton, the former national security advisor-turned-shewed book salesman in American media nowadays, basking in the glory of Trump-bashing, increasingly sounds like a presidential contender in his recent interviews.

A rabid warmonger who in his book, the Room Where It Happened, fully displays his known penchant, e.g., for avoiding direct talk with North Korea and Iran and favoring bombing them instead, is busy portraying himself as a “principled” conservative, who is rattled by Trump’s self-serving frenzy harming “national interests.”

His main audience are the Republicans, some of whom are increasingly disquieted by Trump’s poor performance affecting the national polls, and, who knows, he maybe contemplating running for president at some future point, assuming that nothing will alter the present scenario of Trump’s quest for a second term.

Thus, Bolton is roiling against Trump for daring to contemplate a deal with the (bad old) Iranians, claiming that there is a “danger” of second term Trump easing pressures on Tehran.  After all, according to his own memoir, which is incidentally deeply flawed and omits important facts such as Bolton’s own role in bringing chaos to the National Security Council and at times usurping the role of other cabinet members, Bolton prepared his letter of resignation twice when Trump was close to meeting Iran’s Foreign Minister, Javad Zarif.

Also, he admits that he went behind Trump’s back and communicated with two foreign leaders, namely, crown prince of Saudi Arabia and Israel’s prime minister, who were incensed by Trump’s outreach to Iran, through intermediaries such as Japan’s prime minister and the French president.

This belies Bolton’s own admission that the role of national security advisor is to see that all of president’s decisions are “carried out;” clearly, his own account shows that he did that only when he agreed with Trump’s decisions and, when he did not, he resorted to obstructionism, including by leaking information to the press.

A clue to his lack of candor, the book’s title is misleading because the “situation room” in the White House populated by his kind was never where it all happened and, again by his own admission, trade policies transpired in the Oval Office, much to Bolton’s chagrin.

The arrogant Bolton, who usurped the role of Defense Secretary when he stood at the White House lawn and announced the US dispatch of USS Abraham Lincoln to the Persian Gulf, criticizes the US envoy to UN, Nikki Haley, for prematurely announcing some sanctions, which should have come from the Treasury.

Little surprise that the North Koreans refuse to meet him and depicted him as “blood sucking” ghoul.  With respect to the Iran nuclear accord, which Bolton takes much pride for Trump’s unilaterally axing it, it is noteworthy that none of Bolton’s prior promises to Trump that an “international coalition” would back Trump and the Western allies would follow suit never materialized, vividly demonstrated at the UN Security Council where a draft US resolution on Iran fell on deaf ears.

Demonizing Iran to the fullest and with a long track record as a champion of “regime change,” Bolton fails to address the diplomatic and political setbacks suffered by US as a result of its illegal exit from the nuclear deal (backed by UN), and once again shows his complete disdain for international norms and rule of law, by unabashedly narrating of his doomed efforts to dislodge the Maduro presidency in Venezuela.

Bolton’s radical interventionism, which accounts for his prior role in the illegal invasion of Iraq on false WMD pretexts, is in full swing in his self-serving memoir that, as stated above, leaves a lot to be desired as a factual point of reference for Trump’s presidency.

Never willing to admit a single mistake on his part, Bolton has defended his promotion of “Libya model” of disarmament for North Korea, even though this is simply a reminder to Pyongyang of ‘roads better not taken,” in light of the post-disarmament demise of Libyan leader Moamar Khadaffi.

Still, irrespective of his egregious shortcomings and his ideological zealotry out of tune with the basic needs of American national interests today, Bolton the quintessiontial warmonger is nowadays receiving a timely facelift thanks to a largely accommodating US media relaying his ‘sound and fury’ against Trump without adequate critical scrutiny.

In reaction to Bolton’s diatribe, Trump has called Bolton a madman who just wanted to drop bombs on people, yet the problem with Trump maybe that he is underestimating Bolton’s quest to nurture himself as a potential presidential contender fed by Bolton’s inflated ego and his nefarious loyalties to outside sources, displayed in his book.