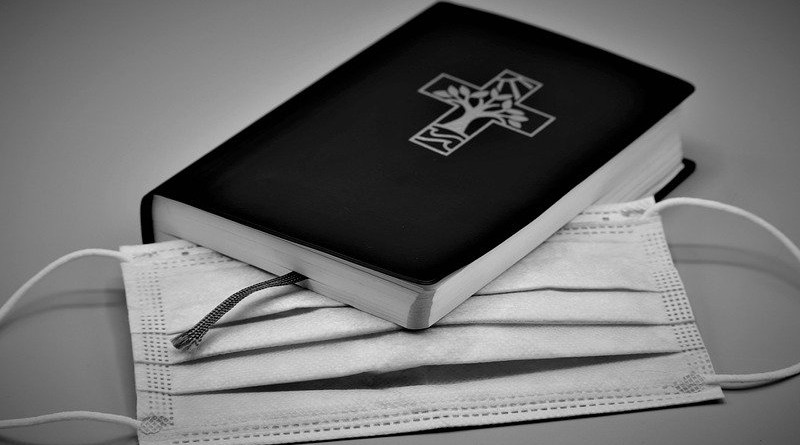 The coronavirus has prompted almost two-thirds of American believers to feel that God is telling humanity to change how it lives according to a poll [conducted April 30-May 4] by the University of Chicago Divinity School and The Associated Press which indicates many people are searching for deeper meaning in the devastating COVID-19 outbreak.

The poll found that 62% of Americans who believe in God feel strongly or somewhat, that the virus is a sign of God telling humanity to change. Evangelical Protestants are more likely than others to believe that strongly, at 43%, compared with 28% of Catholics and mainline Protestants.

Among black Americans who believe in God, 49% say they feel strongly that God will protect them from the virus, compared with 34% of Latino and 20% of white Americans.

All of us are tested personally as individuals; and as organic members of a nation, a society and even the whole of humanity.

Individuals as the Qur’an states: “Indeed We shall put you to test; some with fear and hunger, and some with loss of wealth, lives, and offspring. And (Muhammad) convey good tidings to those who are patient, who say, when inflicted by hardship, “Indeed we are of God and to Him shall we return;” upon them is the blessings of Allah and His mercy.” (2:155)

And the Hebrew Bible states: Even though I walk through the valley of the shadow of death, I will fear no evil, for you are with me; your rod and your staff, they comfort me.” (Psalm 23:4)

A nation, community or a society as God states: “So that I may test them, whether they will follow My law or not” (Torah Exodus 16:4) and “Remember the entire path along which the Lord your God led you these forty years in the desert, He sent hardships to test you.” (Torah Deuteronomy 8:2).

“Or do you think that you will enter Paradise before Allah tests those of you who fought and (also) tests those who are patient [sufferers]? (3:142).

On the other hand very religious leaders have been pushing their followers to oppose anti-COVID19 measures. Israel’s Interior minister urges ‘soul-searching’ in ultra-Orthodox community citing the very high coronavirus infection rate [around 70% of the sick in the entire country are ultra-Orthodox who are only 10 percent of the general population] Aryah Deri said in an interview with an ultra-Orthodox news site. He said that ultra-Orthodox communities in other countries, including the US, UK, France and Argentina, had been hit hard by the virus outbreak.

Many members of the ultra-Orthodox community were slow to begin heeding social distancing regulations and initially resisted the shutdown of schools and synagogues. Several prominent ultra-Orthodox rabbis opposed government efforts to shutter yeshivas and ultra-Orthodox schools as the pandemic began to spread across Israel in March.

And in Iran according to official figures, over 10,000 Iranians have died. But a report by the research arm of Iran’s parliament said over 15,000 may have died. In Tehran, the municipal council said it added 10,000 new graves to its largest cemetery, Behesht e-Zahra.

Meanwhile, the Israeli Health Ministry and National Security Council are pushing for ultra-Orthodox schools to close ahead of Monday’s coronavirus-focused cabinet meeting. Rabbi Gafni told Hebrew media on Sunday that such a move would force him to turn to his party’s rabbinic leadership and “advise them not to be partners in such a government.”

Israel’s Ultra-Orthodox schools started reopening after lockdowns eased in May. Now over 200 students at one Yeshiva in the predominantly ultra-Orthodox city of Bnei Brak have been diagnosed with COVID-19 in recent days. Parents have alleged that yeshiva head Rabbi Baruch Weisbecker has prevented some students from being tested for the virus.