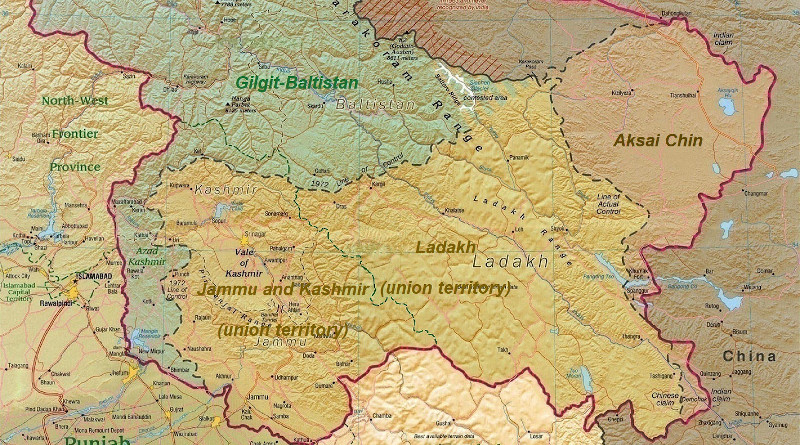 The western portion of the disputed boundary between India and China with the Line of Actual Control. Credit: US Central Intelligence Agency

(FPRI) — Iron rods studded with metal tips and stones seem more suited to medieval armies than modern ones. But such weapons were what hundreds of Chinese and Indian troops wielded against one another in June 2020. They did so, ironically, as a result of confidence-building agreements signed by their governments forbidding the use of firearms near the Line of Actual Control (LAC)—the 3,488-km long disputed border between China and India. The brawl resulted in 20 Indian dead and 76 more wounded. Indian authorities estimate the Chinese suffered at least 40 casualties. The clash occurred in the Galwan Valley, which sits in a region near the LAC called Ladakh at the southeastern edge of Aksai Chin, a high plateau the size of Switzerland that has been occupied by China since the 1962 Sino-Indian War.

The deadly clash did not take place in a vacuum. Tensions along the LAC had already been running high. China and India were locked in standoffs which began in April at various points along the LAC, including three in Ladakh. The one closest to the brawl began when Chinese troops on exercise nearby were dispatched to counter India’s construction of a road that would allow its forces better access to the region. India responded with the deployment of its own troops. By May, the two sides already faced off against one another in not only Ladakh, but also Sikkim, another border area 1,200 km to the east.

Border confrontations between Chinese and Indian forces along the LAC are not new. They occur with some regularity and sometimes escalate into fisticuffs, prompting both sides to rush troops to the border and creating standoffs. Eventually, diplomats from Beijing and New Delhi get involved to deescalate tensions, and both sides gradually withdraw their forces. That process has been repeated for decades. At first, it appeared as though that process would play out again after the border scuffles in May. Instead, events led to a very different outcome. Though the frequency of border confrontations between the two countries has not significantly risen, the intensity of those confrontations has. Another standoff on the Doklam plateau in 2017 lasted for almost three months before the two sides backed off.

The deaths along the LAC were noteworthy, but the fact that Chinese and Indian troops had confronted one another there was not. Most of the confrontations along the LAC have been triggered by some sort of infrastructure construction, usually a road, near the disputed border. That is because roads are critical to mobility through the rugged terrain of the Himalayas. Mobility is what enables China and India to rapidly concentrate their forces and keep them supplied. In short, new infrastructure is useful for both sides to conduct sustained military operations. And the side that can better mount those operations is, of course, more likely to prevail should a shooting war break out. That, in fact, was the salient military lesson from the Sino-Indian War some 58 years ago.

For China, flush with resources from its rapid economic expansion, construction has not been a problem. Beijing built dozens of roads, railways, and airports on its side of the LAC over the last two decades. In 2010, it even sent about several thousand troops and workers into northern Pakistan to help develop infrastructure to better connect China’s Xinjiang region to Pakistan’s ports on the Indian Ocean.[1] With Chinese forces already in Aksai Chin, the presence of still more Chinese troops nearby no doubt concerned New Delhi at the time.

On the other hand, the Indian government has struggled to keep up with China’s infrastructure development. In 2017, officials admitted that they were five years behind on a plan to build 73 new strategic roads near its border with China. At the time, only one-third had been finished.[2] India has also been slow to upgrade its airfields close to the LAC with the equipment and facilities needed to land its C-17 heavy-lift transport aircraft on them or operate its modern fighter jets from them. Many of the airfield upgrades begun in the early 2010s are still underway.[3]

In the meantime, China’s army has modernized. While its order of battle may have been pared down, the army has beefed up its capabilities. The army’s combat formations are now more mechanized than ever before, boosting their organic mobility. Plus, the army has begun to outfit its units based in Tibet with new Type 15 light tanks, PCL-181 self-propelled howitzers, and Z-8G medium-lift helicopters that were designed with high-altitude warfare in mind. And, like many other army units, those stationed near the near LAC have stepped up the realism of their training exercises to prepare them for combat.

Those tactical advancements have coincided with a more strategic one. As noted in its 2015 defense white paper, China’s military has shifted its posture from one of “theater defense” to one of “trans-theater mobility.”[4] Rather than rely on forces within a single military region to deal with threats in that area, China now seeks to gather the best mix of forces from across the country and concentrate them against those threats. To that end, it has conducted a series of large-scale exercises that use its new network of high-speed railways and airports to transport tens of thousands of troops and their equipment between military regions. Coupled with the availability of all-weather roads from its airheads and railheads, China has considerably improved its ability to marshal capable forces on its Himalayan border.

Without an infrastructure network comparable to China’s, India has pursued a different strategy to ensure that it can concentrate enough forces with sufficient speed along its border. That strategy has entailed stationing sizable numbers of troops close to the border. In 2010, India even raised two new infantry divisions to specifically defend Arunachal Pradesh at the eastern end of the LAC. Then, in 2013, it began raising another two divisions to form 17 Mountain Strike Corps.[5] The Indian army envisions that battle groups of the two divisions could be airlifted by C-17 and C-130 transport aircraft into border areas where they could counterattack armed Chinese incursions. Unfortunately for the corps, only one of its divisions, 59 Mountain Division, has since become operational. Budget constraints halted, at least temporarily, recruiting for its second division, 72 Mountain Division.

Modernizing the Indian military has posed an even bigger challenge. Even when funds have been available, India’s Ministry of Defense has often been unable to procure the equipment that the military needs. In one such case, despite a long-standing army requirement to procure new artillery, the ministry repeatedly failed to acquire any for decades. And so, the army went into combat during the 1999 Kargil War with outdated guns. In spite of that, it would still take the ministry 18 more years to acquire the army’s first new artillery pieces, 145 M777 lightweight howitzers intended for 17 Mountain Strike Corps. Similar lengthy delays have dogged many other military procurement programs. So, while India’s ability to defend its northern border has improved, it has done so at a sluggish pace.

Both China and India have sought to prepare their militaries to better assert their territorial claims along the LAC. In the recent deadly clash, their troops may have demonstrated more assertiveness than their political leaders expected. Immediately after the incident, both sides appeared to exercise some restraint. China’s state-owned Global Times—which had once suggested the need to “teach New Delhi a bitter lesson” (a reference to the Sino-Indian War) during the 2017 Doklam standoff—refrained from fresh incendiary invective. For its part, New Delhi seemed to downplay the incident, too. In a televised address, Indian Prime Minister Narendra Modi reassured his country that “Nobody has intruded into our border, neither is anybody there now, nor have our posts been captured.”

Still, none of that means the situation will return to the status quo ante. Understandably, there is enormous pressure from across India’s political spectrum on Modi to take strong action against China. A few days after the clash, New Delhi seemed to abandon its confidence-building agreements with China, and changed the rules of engagement for its forces along the LAC. India gave its field commanders “complete freedom of action” to use all the resources at their disposal, including firearms, to respond to “extraordinary” situations at the border. But coupled with the fact that border confrontations are likely to happen again as both countries push ahead with their road-building plans, that may not bode well for the next standoffs. Deadly as the present has been, the future may prove even more so.