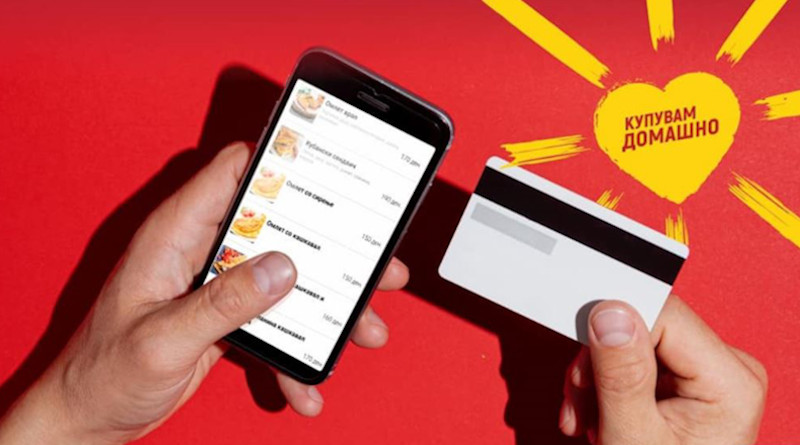 By Marija Tumanovska and Andy Heil*

(RFE/RL) — North Macedonia has unveiled a payment card to soften the blow of the coronavirus crisis and entice people to spend millions of free euros on local products, just before voters go to the polls in a national election.

The country’s finance minister announced this week that more than 100,000 of the cards are already in circulation loaded with 11 million euros’ ($12.4 million) worth of credits to “Buy At Home.”

Under the plan, citizens in households earning less than 15,000 denars ($273) a month, about the monthly minimum wage, are eligible to receive the payment cards loaded with 9,000 denars in credit.

The funds may only be spent on locally made products and local services within 30 days.

Another program uses credits on the cards and vouchers to promote around the same amount of spending by many of those same households on domestic tourism like hotel stays or recreational activities.

“You will find the products [available to buy] designated on shelves, gondolas, or ‘I Buy At Home’ stickers,” Finance Minister Nina Angelovska, who has shepherded the campaign, said on Facebook.

Faced with a resurgent epidemic that has hampered reopening efforts, the program is part of a third package of government actions to offset the effects of the COVID-19 pandemic.

But it is also a response to a consumer preference for imported goods in this landlocked Balkan state of some 2 million that was apparent even before the virus struck.

The government’s Public Revenue Office reported recently that citizen applications for VAT refunds suggested Macedonians spent nearly twice as much on imports as on domestically made goods in the past year.

That love of foreign goods has frustrated policymakers keen to spur domestic growth beyond the country’s 4 percent growth in 2019, before economic forecasts crumbled under the strain of the coronavirus that has infected more than 11 million people and killed 531,000 as of July 5.

The free credit for Macedonians is also a boon to homegrown businesses trying to cope with the crisis.

“For us, this is a great measure,” Slavco Jordanov, the owner of a condiment and jam maker that employs some 80 people in Negotino, told RFE/RL’s Balkan Service.

“I’d also suggest a public campaign to raise people’s awareness to buy domestic products, to explain what a ‘home’ product means,” he said. “For example, we make ketchup exclusively from tomatoes produced here, in our country, not imported from abroad, and the citizens who decide to buy our product should know that.”

Government forecasters had predicted 3.8 percent growth for the country in 2020. In April, that was revised to a 4 percent contraction of the economy because of the coronavirus.

In a late-June assessment of the Macedonian government’s anti-pandemic measures, economists from the Organization for Economic Cooperation and Development (OECD) said that “Given the small size of the North Macedonian economy, the scope of policy action has been quite bold and covers many key groups who have been severely affected by the containment measures.”

The government has earmarked about 550 million euros ($616 million) for economic assistance to combat the epidemic, representing 5.5 percent of GDP, according to OECD figures.

Its third package of measures, announced in mid-May, was aimed specifically at spurring consumer spending and helping domestic businesses and included the plan for the “buy locally” payment cards. It has since restricted the window for using those credits to August 15.

Jaroslaw Mrowiec, an OECD policy analyst in the South-East Europe division, said it appeared “the government of North Macedonia seems to have drawn on existing support measures across the region and brought them together into something innovative.”

He said he was unaware of any other governments that combine financial and consumption support with payment cards, limit the deadline for such spending, and focus only on domestic goods and services.

“There are instances [in other countries] where there is a check or a credit card, but nothing that is [so] limited in its scope, especially on this whole domestic products thing,” Mrowiec said. “We didn’t see any country, either in the region or elsewhere, that helped and aimed so much at the national product. So yes, in one sense it is innovative.”

Skopje has been “very proactive” in terms of its coronavirus containment and economic measures, he added.

“What is certain is that North Macedonia is putting a lot of effort into those domestic products,” Mrowiec said.

Other state payments include tens of millions of euros toward social protections for households who lost income in the informal economy, as well as tuition fees and IT training for an estimated 100,000 students.

The payment-card scheme is overseen by Angelovska, a 31-year-old entrepreneur who made her name founding a local e-commerce venture that mostly apes the global e-marketplace Groupon.

She was recruited to then-Prime Minister Zoran Zaev’s Social Democratic-led cabinet as an independent in August 2019, taking over the finance portfolio from Zaev himself, in what many regarded as a welcome injection of youth and managerial acumen.

Critics have pointed out that the e-marketplace company she founded, Grouper, is among the leading retailers that could most benefit from the payment card, which is also equipped for online purchases.

The “buy at home” spending spree comes on the cusp of national elections on July 15 to replace a caretaker government in place since January.

Zaev stepped down at the end of last year and called the snap vote to gauge pro-EU support after a controversial name change to placate neighboring Greece and a subsequent snub from Brussels on the path to EU membership in October.

The European Union has since opened membership talks with Skopje, but North Macedonia’s battering from the coronavirus despite strict lockdown orders makes the elections unpredictable.

After signaling a three-step plan in mid-May to reopen the economy, a resurgence of infections sparked new restrictions in June.

Amid that rise in COVID-19 cases in mid-June, Zaev’s Social Democrats agreed with Hristijan Mickoski, the leader of the main opposition party VMRO-DPMNE, to hold the elections in mid-July despite the ongoing threat to public health.

Officials have subsequently sent mixed signals as political jockeying and campaigning intensifies, with no side wanting to appear to be a brake on public health or economic recovery.

The official infection figure and death toll among Macedonians — 6,787 and 157 per million inhabitants — are both far higher than the global coronavirus averages.

That is based on just nearly 65,000 tests in a population of 2 million, suggesting the rates could be higher.

The recent spike in cases has forced organizers to stretch the voting for the national parliament over three days.

Voting will begin with health-care workers collecting ballots from isolated or quarantined patients on July 13 and ending with a full day of voting at polling stations on July 15.