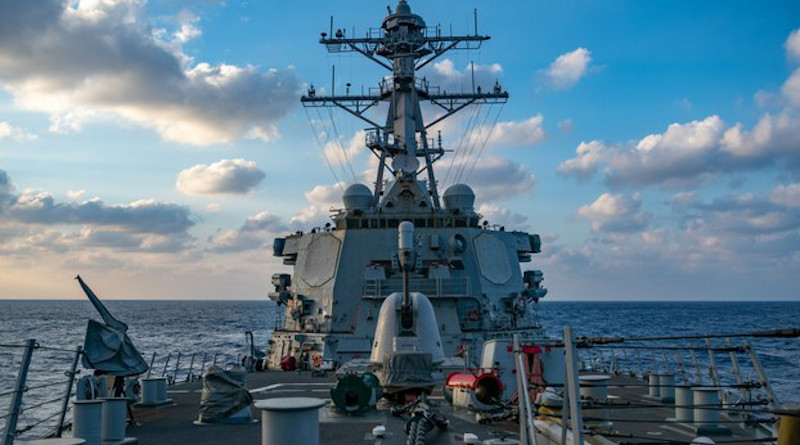 The US led-cacophony of criticism of China for its actions in the South China Sea is reaching a ridiculous — and dangerous — level.  The situation is far more complicated than the U.S. would have it and there is plenty of blame to go around for the sad state of affairs.  Indeed it is not at all clear which big power is the greater threat to peace and stability there — China or the U.S.

The US narrative is that China is destabilizing the situation and is thus the main threat to peace. After the early April sinking of a Vietnamese fishing boat due to a collision with a Chinese Coast Guard vessel in China’s claimed waters off the Paracels, https://www.scmp.com/comment/opinion/article/3081472/world-focuses-covid-19-china-exploiting-distraction-south-china-sea the US State Department expressed serious concern, and added that “this incident is the latest in a long string of PRC actions to assert unlawful maritime claims”.

But this was simplistic hype that lumped different political and geographic circumstances as well as the degree of reasonableness of China’s actions.  Indeed there may be reasonable explanations for many of them. https://www.scmp.com/comment/opinion/article/3081472/world-focuses-covid-19-china-exploiting-distraction-south-china-sea

If the U.S. means that China is a threat to its continued hegemony in the South China Sea, then there is some truth to it. But let’s look at the bigger picture.

The U.S. has publicly declared China a “strategic competitor” and a “revisionist” nation. It believes that the U.S. and China are engaged in “a geopolitical competition between free and repressive visions of world order” in the Indo-Pacific region. https://www.whitehouse.gov/wp-content/uploads/2017/12/NSS-Final-12-18-2017-0905-2.pdf

The South China Sea has become the current crux of their strategic competition. A Council on Foreign Relations report says that the US “military needs to continue conducting operations” [in the South China Sea] to ensure its readiness in a number of contingencies, including the defense of Australia, Japan, the Philippines, and Taiwan.” https://www.cfr.org/report/military-confrontation-south-china-sea In other words, the prime reason for the US military presence there is to maintain its regional hegemony.

That is what China believes and that to do so the U.S. wants to contain and constrain its rightful rise.  For China, the South China Sea is well within its ‘sphere of influence’. https://www.voanews.com/east-asia-pacific/voa-news-china/why-china-sure-match-us-aircraft-carriers-disputed-asian-sea. It is an historically vulnerable underbelly that must be turned into a “natural shield for its national security.” https://www.scmp.com/comment/opinion/article/3083194/why-us-continues-stir-south-china-sea-despite-covid-19-body-blow  It hosts its vital sea lanes of communication that it believes the U.S. could and would disrupt in a conflict. But even more important, it provides relative ‘sanctuary’ for its second strike nuclear submarines that are its insurance against a first strike against it– something the U.S.—unlike China–has not disavowed.

US intelligence, surveillance and reconnaissance (ISR) probes in, over and under the South China Sea  focus on detecting, tracking and if necessary targeting China’s nuclear submarines. In China’s perspective–and it is not alone in this view—it is only acting defensively in the face of US military threats. Given what it perceives to be the growing US threat to its nuclear submarines, it is building up capabilities on some of the features it occupies to neutralize US ISR and thus enhance the survivability of its nuclear submarines in the early stages of a conflict. For China these installations are important to its continued existence. It is not about to compromise this defense unless and until the U.S. pulls back on its ISR probes.

This is the core of the ‘threat’ to peace and stability in the South China Sea.  But the U.S. has diverted the narrative by hyping these installations as a symbol and enabler of China’s aggression against rival claimants and threatened them with warships and warplanes. Moreover, it has cleverly painted China’s objections to and interference with its ISR probes as threats to commercial “freedom of navigation”.

Although the two seemed to have worked out a modus operandi to avoid direct kinetic conflict, the situation is unstable.  Each is reacting to the other—the U.S. to the ‘China threat’ to its continued regional hegemony and China to the US ‘threat’ to its rise, its national security and even its existence. A breach of operational ‘redlines’ by either side could spiral into conflict. Unless they can compromise and share power, peace and stability in the South China Sea are indeed threatened—and both share the blame for that.

The U.S. constantly calls out China for being a threat to the existing international order, including in the South China Sea. But this is the height of hypocrisy.  The reality is that the U.S. under Trump and Pompeo has dramatically undermined the existing international order and the concept of international community.  It has alienated many allies and friends and politically undermined NATO.  It has refused to join the International Criminal Court and tried to obstruct its operations, and it withdrew from the Paris climate accords, the Trans Pacific Partnership and the Intermediate- Range Nuclear Forces Treaty. It has refused to recognize the overwhelming majority opinion of the International Court of justice and the UN General Assembly that Diego Garcia –where it has massive strategic air and naval bases– belongs to Mauritius. https://thediplomat.com/2019/03/americas-golden-opportunity-to-demonstrate-its-support-for-international-order/

Moreover it often appears to violate the UN Charter by threatening and even using force like in Iraq to achieve its international political objectives.  Most relevant it refuses to ratify the UN Convention on the Law of the Sea, yet blasts China who is a ratifier for violating it.

This new ‘international order’ was—and still is—centered on US grand strategy–the rules-based free trade system, a hub and spoke military alliance system with the US as the hub,, multilateral cooperation and its interpretation of international law as well as the proselytizing of democracy and other American ‘values’. The U.S. believes that challenging these principles, norms and values undermines its legitimacy and that of the ‘international order’. So of course the U.S. wants to strengthen the existing status quo in which it is the dominant actor and patron.

But China believes it is being constrained by the existing ‘international order’ whose origins have their roots in the colonial era and its ‘century of humiliation’. China wants respect for its enhanced status and its ‘core interests’ and therefore wants to bend the system to its benefit –just as the U.S. did during its rise, and still does when it is in its interest to do so.

It is not surprising that the U.S. and China have starkly different interpretations of how the ‘rules’ apply in the South China Sea. Indeed, these different interpretations reflect diverging fundamental strategic core interests. The U.S. accuses China of ‘militarizing’ the South China Sea.  But ‘militarization’ means different things to China and to the U.S. To China, its emplacement of ‘defensive weapons’ on its own territory does not constitute ‘militarization’ but rather  an exercise of the right of self defense enshrined in the UN Charter. In China’s view the U.S. has clearly ‘militarized’ and continues to ‘militarize’ the region with its forward deployed troops, assets and patrols, including flyovers by its nuclear capable B 52 bombers. https://www.reuters.com/article/us-china-southchinasea-usa/china-rejects-ridiculous-us-accusation-of-south-china-sea-militarization-idUSKCN1IW0ZL ; https://www.japantimes.co.jp/news/2018/06/06/asia-pacific/u-s-sends-b-52-bombers-vicinity-south-china-sea-amid-row-militarization-islets/#.WyGlQ1VKj3g

One sure way that China will become a ‘threat’ to the U.S. in the South China Sea is if the U.S. continues to press it there militarily. The US Senate Armed services Committee’s proposed multi-billion dollar Pacific Deterrence Initiative to counter China’s rise with deployment of intermediate range missiles and development of “expeditionary airfield and port infrastructure” in East Asia is particularly threatening. https://www.cnn.com/2020/07/02/opinions/mark-hannah-william-hartung-confrontation-china/index.html

Worse it is accompanied by ramped up demonization of China by government officials that is attempting to convince the public of the ‘China threat.’ In the face of such provocative US military and political actions, any country would prepare to defend itself– and so will China.

While it may be fashionable to demonize China regarding its policies and practices in the South China Sea https://www.scmp.com/comment/insight-opinion/article/2111851/illegal-fishing-global-problem-not-one-us-navy-can-solve, the situation is very complicated and we do not know nearly enough to demonize one country or another.  But we do know that there is plenty of blame– and guilt– to go around.

This piece first appeared in Pearls and Irritations. https://johnmenadue.com/the-south-china-sea-who-is-the-real-threat-to-peace-and-stability/

Home » The South China Sea: Who Is The Real Threat To Peace And Stability? – Analysis

By Lisa Vives A U.S. State Department red level “Do Not Visit” warning against travel to Burkina Faso has been

Covid Under Biden: What Can Be Done? – OpEd