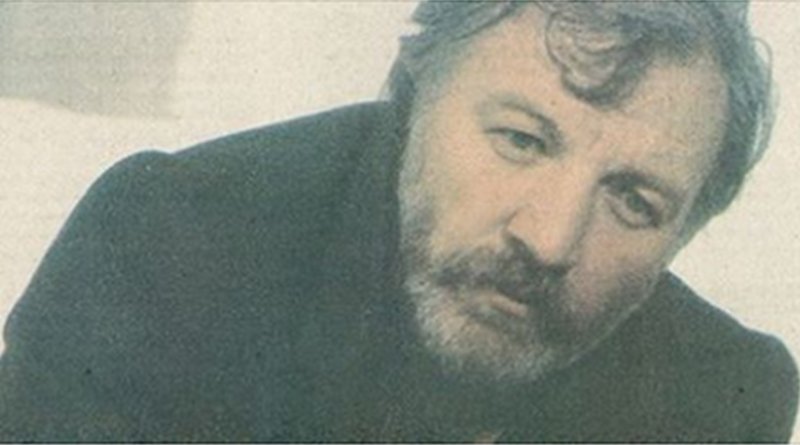 The only child of the legendary Kosovo actor recalls a loving father who enjoyed life but died tragically, in keeping with his greatest roles.

The evening that his first and only child was born, Istref Begolli was on stage in a production of Shakespeare’s Macbeth in Pristina’s Provincial Theatre, now the National Theatre of Kosovo.

After the last act, Begolli, already a major name in Yugoslav theatre at the age of 42, was told by colleagues – in jest – that the baby was a boy. He rushed to call home, where relatives said that his wife, Hadije Maloku-Begolli, and baby daughter were fine.

Begolli headed to the third floor bar to celebrate, declaring ‘Come everyone, I have a girl!’

It was 1975, and the son who was actually a daughter, Alba Begolli, lives today in the same apartment where her parents raised her.

Beneath a picture of Begolli performing Macbeth, Alba spoke of the legendary Albanian actor as a gentle, sensitive father who enjoyed life to the full.

“Dad was an amazing parent with whom I had a very friendly and sincere connection,” Alba said.

“He was emotional, gentle, sensitive and generous with his love. But he was also a very strong and principled personality. Besides having him as my dad, he was a friend and a brother to me, with whom I could talk openly about everything. We had an extremely frank and special rapport.”

“He was very committed to his family and his career. He enjoyed in everything, even in the small things like an ordinary lunch. He always said ‘You have to know how to cherish and value the small things, because the big ones come along very rarely, sometimes never.’ I’m fortunate to be his daughter and my mother too was lucky to have such a spouse.”

Istref Begolli, who would later wow audiences with his stage presence and charisma, was born on May 7, 1933 in Pec/Peja, western Kosovo.

Aged 15, he moved to Pristina to help establish the Provincial Theatre, where he would flourish in a string of tragic roles that took him to the most prestigious theatres of socialist Yugoslavia.

“I was around 12 years old when I started to assist him with the roles that he was preparing.

“First, my father would start learning the script and the text, familiarising himself with the words and bringing them to life. He always kept a notebook where he would write the text and also the last lines of the partner. This ‘partner’ was always me.

“I can say that of all Albanian actors of that period, he stood out for his prominent diction.

“I was really attached to the work of my father, probably because I assisted him. When the night of the premiere would come, I always knew the whole text by heart and I would be trembling from fear.”

Alba’s parents married in December 1974, when their careers were flourishing.

Hadije Maloku-Begolli was the first female judge in Kosovo, then a province of Serbia, one of six republics in the Yugoslav federation. She ended her career in 1990, on the cusp of Yugoslavia’s bloody demise, as Kosovo’s attorney general and died in 2017 at the age of 81.

“My mother was more of a temperamental person, a determined and wise woman in every aspect. She complemented my father, who was different in nature. My mother was the pillar of our small family, the one who always kept alive the emotion and sensitivity.”

“They both had very similar tastes, similar approaches to life. They were very human and close to people – two personalities with progressive and visionary worldviews, two prominent intellectuals.

“I grew up in a healthy family, with mutual respect and virtues that are rarely found today.”

In the corner of the room where Alba spoke, a picture dated 1946 showed Begolli with his mother and two sisters. Others pictured him performing Macbeth and Mesa Selimovic’s Death and the Dervish. Pride of place is a family photo from 1978, when Alba was three years old.

Alba enjoyed being an only child, the sole focus of her parents’ attention. In Kosovo at that time large families were the norm. But it was only in her twenties that Alba began to feel the absence of a sibling.

Alba said it her father’s decision that they should have only one child.

“I believe this was due to the fact that he feared not being able to succeed in both – career and family.”

During the 1998-99 Kosovo war, Alba and her parents barely left their home. Alba recalled the war and the years of Serbian repression that preceded it as a difficult period, both on a personal level as well as and for the cultural and artistic scene at the time.

“My father was not been engaged in the Provincial Theatre from the early 1990s. When the Serbian regime took over all the institutions, they took the Theatre as well. So my father became disconnected from his roles and career. He performed in a few television dramas in the meantime, under difficult circumstances. At the decision of my father, we did not leave our apartment during the war.”

In a career spanning 50 years, Begolli’s performances in Macbeth, Othello, The General of the Dead Army, Bregu i Pikëllimit, Oda e Junikut, Kulla and Vallja e Cmendur placed him among the best Albanian actors and perhaps the greatest performer of tragic roles.

His last role was as the father in ‘Vjeshta e trëndafilave’ (Autumn of Roses), a 2000 Kosovo film that depicted Serbian war crimes against Kosovo Albanian civilians during the war that had ended the year before.

The Professional Theatre in Begolli’s native Pec/Peja bears his name, while schoolchildren learn about his career in textbooks.

“As long as ordinary people still honour, remember and respect his art with love and nostalgia, this means a lot to me,” said. “In the end, he used to speak to people, to the audience. His name is thus transferred from generation to generation and they learn about his art.”

Begolli died on February 1, 2003 in Croatia, months after he slipped into a coma having been injected with penicillin, to which he was allergic. Alba blames the local clinic where he was given the injection for the “fatal error” and the poorly-equipped ambulance sent by the main hospital.

“No one had ever taken responsibility for his tragic loss,” she said. “I often think my father died in such a way because all his roles were tragic.”

Alba shared her father’s love of language, graduating from the University of Pristina with a degree in English Language and Literature. She now works as a translator between English and Albanian.

“For me, translation is an art,” she said. “I am glad I have a different profile from my parents, but a love of arts I inherited from my father.”