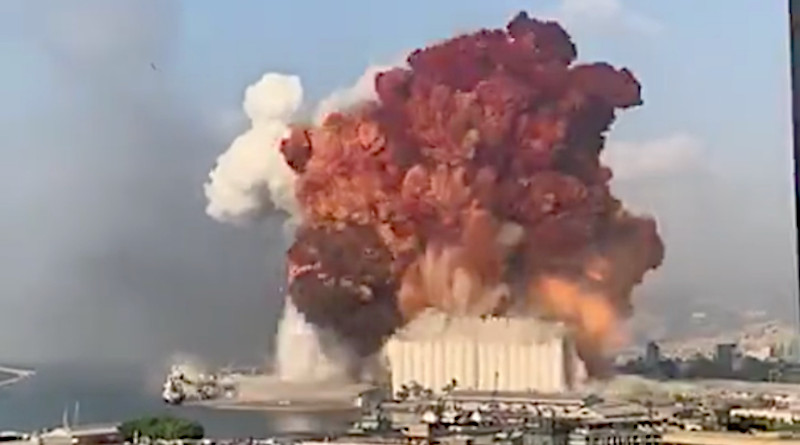 The horrific blast at Beirut’s main port has killed dozens and injured several thousand people, ruining much of the capital city and turning hundreds of thousands of its residents homeless and, simultaneously, raising the fear of a severe food insecurity for a city dependent on import of food by the sea.

The catastrophe has hit Lebanon at the worst possible time, notwithstanding the country’s economic meltdown and the huge Covid-19 health crisis, promising much misery for the population for the proximate future.

Much depends on the extent of international solidarity and immediate support, particularly by the rich Arab nations, to alleviate the horrific suffering suddenly visited upon the city — that has a modern history punctuated with episodic violence as well as a permanent tension with the expansionist neighbor, Israel, which has amassed its forces at Lebanon’s border following the “fake news” of cross-border infiltration by Hizbollah fighters.

Indeed, immediately prior to the Beirut explosion, Israel’s military leaders had vowed to destroy Lebanon’s infrastructure if any harm to their soldiers was done by Hizbollah, priding itself for its effective missile deterrence vis-a-vis Israel’s superior fire power.

But, the latter poses an unacceptable security risk from the prism of Zionist state bent on dominating its neighbors, which explains Israel’s and US’s constant attempt, with some help by compliant Arab states, to undermine Lebanon’s fragile democracy and promote the cause of its disintegration as a viable integrated nation-state.

The Beirut explosion has been described as a ‘final nail’ in Lebanon’s coffin, which might be an exaggeration although it conveys the sense of crisis emergency which has overtaken the country’s sentiments, filled with doubts about Lebanon’s future.

As a bastion of “axis of resistance” that played a crucial role in turning the tide of bloody war in Syria in favor of Damascus, Lebanon is simultaneously a marked state by a powerful array of regional and extra-regional opponents that never cease to tire from their efforts to undermine Lebanon’s peace and tranquility, recalling how the meddling Saudi Crown Prince temporarily kidnapped Lebanon’s Prime Minister in the hope of triggering a political crisis.

Pressured from all sides, Lebanese politicians have had to master the art of balancing act in a game of survival that has prevented the recurrence of past civil war(s), yet one wonders now if they can weather the perfect storm of multiple crises hitting the country now mercilessly?

The answer to this question depends partly on the ruling elite’s ability to handle the latest crisis with prudence and efficiency.  As the investigation on the cause of the massive explosion gets under way, there are two contrasting scenarios, each requiring a separate set of responses.

The first scenario is “accidental explosion” stemming from pure neglect by the relevant authorities with respect to the thousands of impounded ammonium nitrate kept at an unsafe warehouse at the port.

To this effect, the government has reportedly arrested some port authorities and the Lebanese Prime Minister, Hassan Diab, has vowed to punish those responsible.  But, Diab and other officials must also reckon with another possibility, i.e., a second scenario, that is, an Israeli bomb attack triggering a chain reaction by exploding the mammoth 2,750 tons of ammonium nitrate.

A clue to this alternative explanation has, in fact, been provided by US President Donald Trump who has stated that his generals have informed him that the Beirut explosion has been caused by a “bomb attack.”

According to media reports, immediately after the blast several US reconnaissance planes flew missions in the vicinity of Beirut, thus reinforcing the belief in the expert community that US intelligence has vital data suggesting the involvement of a bomb, or several bombs in plural, causing the initial small explosions that preceded the “Hiroshima-style” mega-blast that was equivalent to a powerful earthquake.

Israel is, of course, the leading suspect in this scenario, in light of its reckless history of precision targeting in Syria, which have caused serious “collateral damage” over the years.

It is perfectly conceivable, then, that much like its operations against targets in Damascus, Israel may have perpetrated an unspeakable crime against humanity by recklessly planning and executing a hidden military attack — that may or may not have intended to instigate the larger blast that has devastated Lebanon’s capital city.

Henceforth, the international community through the United Nations must immediately commence a fact-finding investigation of this matter and, should the conclusion confirm the second scenario and material evidence of Israel’s culpability in a heinous crime against a whole civilian population, then the necessary steps such as the prosecution by the International Criminal Court and severe international sanctions on Israel are called for.

To conclude, the Beirut blast reminds one of Robert Redford/Brad Pitt 2001 movie Spy Game, which shows the two CIA operatives splitting after a morally disastrous explosion levelling whole city blocks in Beirut intended to kill a terrorist mastermind. Chances are that Israel detonated the initial bomb blasts that triggered the big explosion, targeting a Hizbollah arms depot. If so, then what Israel has perpetrated is nothing less than a humongous crime against humanity, violating Lebanon’s sovereignty and inflicting significant harm to Beirut’s innocent population.