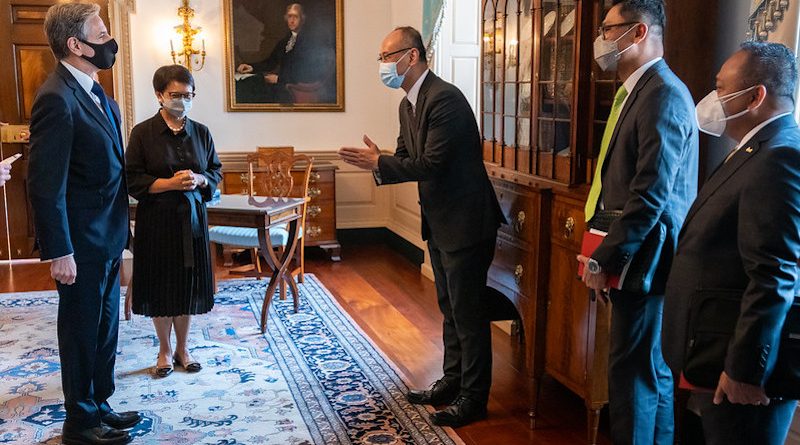 By Ahmad Syamsudin and Shailaja Neelakantan

Indonesia’s top diplomat on Thursday signaled the start of “a new era” in ties between Southeast Asia’s largest country and the United States, as she wrapped up a visit to Washington.

The two met at the State Department as the American diplomat engaged foreign ministers from the Association of Southeast Asian Nations during various meetings over the course of five days this week. The United States is looking to the ASEAN member-states for support toward a free and open Indo-Pacific amid China’s increasing expansionism in the contested South China Sea.

“Indonesia and the U.S. are entering a new era of bilateral relations. … Indonesia’s hope is this … engagement will contribute to the creation of peace, stability and prosperity in the [Southeast Asian] region,” Retno said in a videotaped statement issued by her ministry and posted on its YouTube channel.

Blinken and Retno also emphasized the growing importance of the Indonesia-U.S. partnership “and its contribution to a secure and prosperous Indo-Pacific,” State Department spokesman Ned Price said in a statement Tuesday.

“The leaders committed to working together in the fight against the global pandemic, fighting the climate crisis, boosting bilateral trade and economic ties, [and] defending freedom of navigation in the South China Sea,” Price said.

While Indonesia does not regard itself as party to the South China Sea dispute, Beijing claims historic rights to parts of that sea overlapping Indonesia’s EEZ as well.

Jakarta has intensified sea patrols in recent years after Chinese fishing boats, escorted by China Coast Guard ships, sailed into Jakarta’s EEZ off the Natuna Islands, Indonesia’s name for its waters at the southern end of the South China Sea.

Retno and Blinken met as their countries were holding the largest-ever joint-training between their armies, as more than 4,500 soldiers converged on Indonesian islands for the first live Garuda Shield exercise since 2019.

Garuda Shield focuses on strengthening bilateral relationships and demonstrating “U.S. resolve to support the security interests of friends and allies in the region,” the Pentagon had said late last month.

In addition to helping with military training, Washington is assisting Indonesia – and the wider Southeast Asian region – with pandemic aid.

Earlier, this week, U.S. National Security Adviser Jake Sullivan informed Retno that Washington would provide Jakarta an additional $30 million in COVID-19 assistance, bringing the total U.S. assistance to Indonesia since the start of the pandemic to more than $65 million.

The U.S. has also given Indonesia 8 million doses of coronavirus vaccines so far.

Still, Indonesia is unlikely to enter an alliance with the U.S. because of its non-aligned foreign policy doctrine, said Yohanes Sulaiman, an international relations lecturer at Jenderal Achmad Yani University in Cimahi.

“The U.S. wants to court Indonesia especially in the face of China’s growing aggressiveness, but Indonesia balks at this, because of its ‘free and active’ foreign policy and domestic pressure,” he told BenarNews.

“Indonesia doesn’t want the situation [in the South China Sea] to escalate, but doesn’t want to get too involved either because it has little power. On the other hand, we can’t take a tough stance on China because we need their money.”

While not the largest investor in Indonesia, China’s spending in the Southeast Asian country has consistently grown, nearly doubling to U.S. $4.8 billion in 2020 from $2.4 billion in 2017.

Despite the strategic dialogue, ties between Indonesia and the United States would remain “business as usual,” Yohanes said.

“Other than a reaffirmation of strong Indonesia-U.S. relations, there’s not much in it,” he said. “Unless Indonesia suddenly upgrades military ties with the U.S. to become a ‘semi-ally,’ I won’t consider it a new era. I don’t see anything new.”