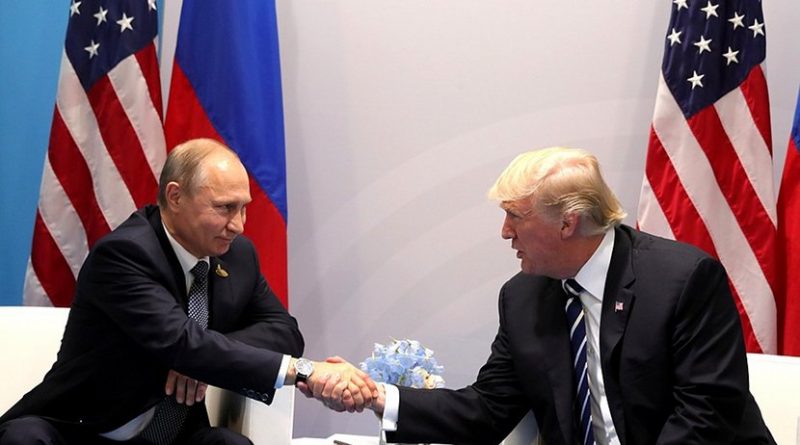 There is no last refuge for the scoundrels intent on stoking cold and possibly hot war against Russia. Neocons in both parties and the corporate media have all spent years demonizing Russia’s president even as they commit and abet horrific crimes against humanity at home and abroad. Every charge leveled against Vladimir Putin is a sinister projection of the American rap sheet. That is just one reason the so-called Russiagate story won’t be allowed to die.

The latest and most shameful charge is that Russia has targeted black Americans in an effort to “sow division” in the United States via social media. We are told that the Russian government spent a grand total of $100,000 to undermine the election and American society. Twitter and Facebook posts on issues ranging from the second amendment to police murder are now said to be tools of Russian espionage.

The cynical plot kills several birds with one stone. Democrats can explain away their dismal electoral failures. Democrats and Republicans make the case for imperialism. Now a phony concern for the plight of black Americans will be the rationale for targeting not only the Russian government, but all leftists in this country. From the Propornot campaign to changes in search engine algorithms, leftists and even progressive Democrats are being censored. That attack is committed under the guise of fighting Vladimir Putin and the effort is completely bipartisan.

Corporate giants like Facebook, Twitter and Google go along with the war party. Facebook initially showed little concern regarding the flimsy charges, but Democratic Senator Mark Warner raced off to Facebook headquarters to demand they find something. Facebook complied and is now fully on board with censorship under the guise of fighting Russia.

Now black people are being used in the propaganda effort. A neocon unit called Alliance for Securing Democracy has taken it upon itself to decide who is or isn’t a Russian operative. Led by right wingers like Bill Kristol, Michael Chertoff and Michael Morrell, professional propagandists and former CIA directors ask us to accept their determinations about who is or isn’t working for Russia. Whatever the truth about these social media ads, black people must not defend the system which oppresses them.

There is no American democracy left to undermine anyway. America is not a democracy and nothing proves it like the police killing three people every day or the fact that one million black people are held behind bars in this country.

Americans regularly undermine their own electoral process without any prompting from foreign countries. The Republican Party is committed to keeping black people from voting, and it is they who attempted to hack election results in North Carolina in 2016. It is the Democrats who say little about their most loyal constituency losing voting rights through felon disenfranchisement, voter ID laws and outright vote theft through electronic means.

The Root may join the Democratic Party effort and claim that the Kremlin “never loved black people” but the Russian Federation is under no obligation to prove anything of the sort. Black people were not chattel slaves in Russia and didn’t create a financial powerhouse through unpaid labor in that country as they did here in the United States. It is in this country that the full power of racism and capitalism keep us under literal physical control.

Black people took to the streets in Ferguson, Missouri and Baltimore, Maryland because Michael Brown and Freddie Gray were killed by police. If there is any division to be sown it is because of institutionalized murder and other crimes and not because of any actions on Vladimir Putin’s part.

While the corporate media sow their own dissension the United States government does what it has always done. Its history of meddling in the affairs of other countries is a long one indeed. Cuba is just one country that has been under America’s gun for decades. The most recent effort used Cuban’s text messaging in an attempt to influence that population. No one should comment on the latest assertions against Russia without calling the United States to account too.

It would be an insult to the legacy of the liberation movement if black people allow themselves to become dupes for the bipartisan neocons. Division is the direct result of the racist American project and there should be no confusion about that fact. All the criminality is committed right here by this government. There is no need to look abroad for perpetrators.