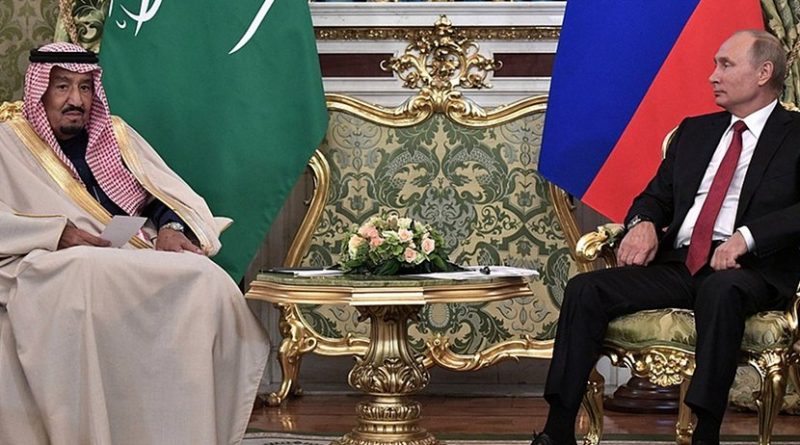 Russian President Vladimir Putin hosted Saudi Arabia’s King Salman for talks at the Kremlin on Thursday, cementing a relationship that is pivotal for world oil prices and could decide the outcome of the conflict in Syria.

Putin received the monarch in the gold-decorated St. Andrew Hall, one of the grandest spaces in the Kremlin, attended by soldiers in ceremonial dress and with an orchestra playing their countries’ national anthems.

“I am sure that your visit will provide a good impulse for the development of relations between our two states,” Putin told King Salman as they sat alongside each other in the Kremlin’s lavishly decorated Green Parlor. “This is the first visit by a Saudi monarch in the history of our relations and that in itself is a landmark event,” Putin said.

The king invited Putin to visit his country — an offer the Russian leader accepted — and said they planned to keep cooperating to keep world oil prices stable.

“We emphasize that the security and stability of the Gulf region and the Middle East is an urgent necessity for achieving stability and security in Yemen,” the king said.

“This would demand that Iran give up interference with the internal affairs of the region, to give up actions destabilizing the situation in this region.”

King Salman and President Putin signed a slew of arms and energy deals.

These agreements are “expected to play a pivotal role in the growth and development of the military and military systems industry in Saudi Arabia,” SAMI said in a statement.
The leaders of the world’s largest energy exporters discussed an extension of an OPEC (Organization of the Petroleum Exporting Countries) agreement to cap oil output.

The two countries signed a series of multibillion-dollar investment deals including one to create a $1 billion fund to pursue energy projects.

Moscow and Riyadh worked together to secure a deal between OPEC and other oil producers to cut output until the end of March 2018, helping support prices.

Saudi Energy Minister Khalid Al-Falih said Saudi Arabia is “flexible” regarding Moscow’s suggestion to extend the pact until the end of next year.

He said Saudi Arabia wants to develop ties with Russia further, particularly in the private sector.

“I see huge opportunities for the business sector in both nations,” he said.

Russian Foreign Minister Sergei Lavrov said agreements came in the fields of “energy — not only traditional but also nuclear power — and also in cooperation in space exploration (and) agro-industry and infrastructure projects.”

Later, speaking at a news briefing, Al-Jubeir said Saudi Arabia is working closely with Russia on uniting Syria’s opposition, adding that Moscow and Riyadh agreed on the need to preserve Syria’s territorial integrity and state institutions.

For his part, Lavrov focused on the common ground, saying the two leaders had agreed on the importance of fighting terrorism, and finding peaceful solutions to conflicts in the Middle East.

Lavrov said the meeting between the Saudi monarch and Putin saw a “particular focus on Syria, Iraq, Libya and Yemen.”

Separately, the Russian-Saudi Investment Forum concluded on Thursday in Moscow with announcements of joint business and investment projects.

Ibrahim Al-Omar, governor of the Saudi Arabian General Investment Authority (SAGIA), said: “We’re working on improving the level of FDI (foreign direct investment) to the Kingdom by attracting more investments. We’re working to give the private sector a bigger share in the market.”

The energy minister said bilateral cooperation in the last two years has benefited the oil market by stabilizing prices.

“It has breathed back life into OPEC, which found itself… unable to swing its production as supply was persistently high in 2014 and global inventories were steadily rising ahead of demand,” Al-Falih added.