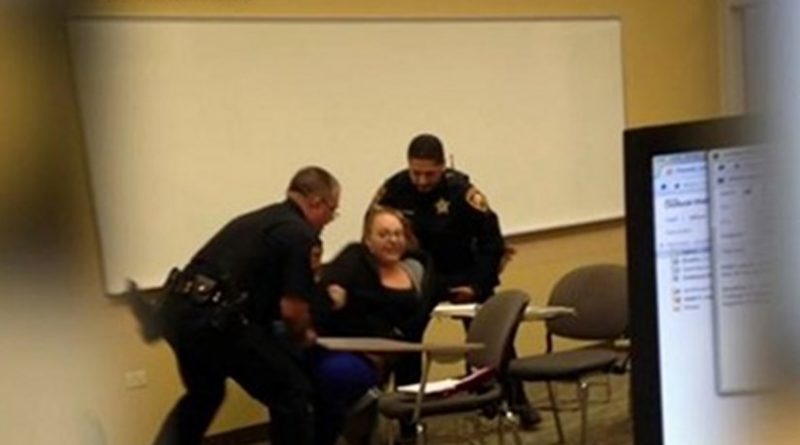 Former DuPage student Jaclyn Pazera filed a lawsuit this week against the college.

Some people came to the defense of school cop Ben Fieldes who last week yanked a student in a Spring Valley High School math class in South Carolina out of her seat and attached desk, hurled her across the classroom floor, and arrested her. They said Fields’ actions were justified because the student was occupied with her cell phone instead of participating in the class. Now comes news from the College of DuPage in Illinois that school cops can do pretty much the same thing to a student who is participating in class.

Former DuPage student Jaclyn Pazera filed a lawsuit this week against the college. The lawsuit is in response to two school cops, caught on video, yanking her from her seat and attached desk, pinning her to the ground, and handcuffing her while she was attempting to participate in her philosophy class at the college last year.

As reported by Justin Kmitch in the Daily Herald, Pazera was charged with “obstructing a peace officer and resisting a peace officer,” both of which charges were dropped on Tuesday of last week — the day the prosecution of Pazera was scheduled for trial. Of course, the charges against Pazera were absurd from the beginning. They are among the standard charges piled on victims of police brutality in an attempt to defend the indefensible, shift the blame, and provide leverage to prevent the victims from taking the kind of legal action Pazera took this week.

Even the charges’ nomenclature reeks of dishonesty. “Peace officer!” Give me a break!

Apparently, the police had been enraged by Pazera, shortly before their attack on her, smoking in a place not designated as a smoking area. In this upside-down age of SWAT, maybe Pazera got off easy. In July, Sandra Bland ended up dead in a Texas jail cell three days after her arrest in a traffic stop for failure to use a turn signal when changing lanes. That traffic stop escalated into a horror show of physical abuse and incarceration right after Bland did not immediately comply with a cop’s request that she extinguish a cigarette she was smoking in her own car.

Home » Participating In Class? School Cops Can Arrest You for That Too – OpEd