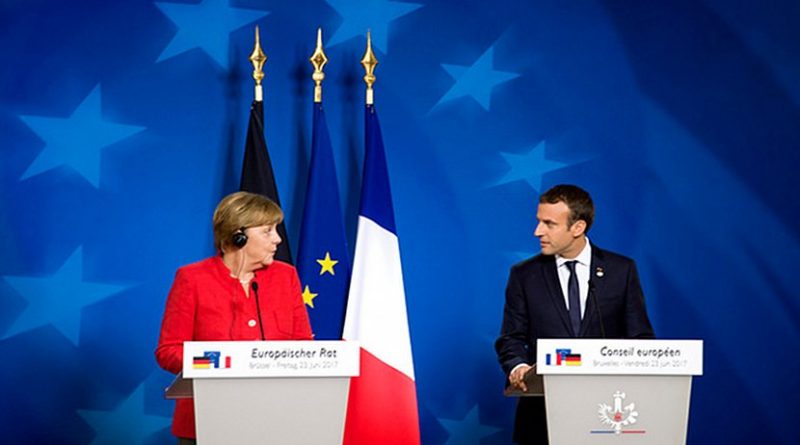 After years of crises, of doom and gloom, the mood in European capitals is now becoming more upbeat. Brexit is not turning out to be the nail in the EU’s coffin that some observers had predicted. Instead of running headlong towards the exit, a large majority of Europeans see the UK’s struggle with Brexit as a cautionary tale, a series of political missteps not to be imitated. And with Emmanuel Macron’s triumph over the Eurosceptic Marine Le Pen, France has an energetic leader eager to cut a new deal with Germany in order to revive the ‘tandem’: the German-French team that was crucial in the past for leading the EU towards closer integration.

In a number of recent speeches, Macron has set out, with broad brush strokes, a long list of projects for the EU. He has even spoken of a ‘sovereign’ Europe, using the federalist language that has been out of fashion over the past few years. Indeed, his overall vision sounds highly federalist, being based on the analogy of the state.

At the Sorbonne (with an English summary titled “Initiative for Europe. A sovereign, united, democratic Europe”), Macron spoke of six areas in which EU member states should work together more closely: security (including defence, where he called for a new EU intervention force), border control and migratory regulation (including a European Asylum Office), foreign policy (with a clear priority for Africa), sustainable development, digital transformation, and Europe as an economic and monetary power. In addition, he made some proposals on tax harmonisation, trade, EU enlargement (mentioning the Western Balkans) and education (exchanges and the creation of ‘European universities’). Finally, he expressed an interest in strengthening the European Parliament through transnational voting lists and made some proposals for organising the reform process he is eager to start (democratic conventions, a Europe of different speeds with a Franco-German ‘engine’ and the establishment of a ‘Group for overhauling Europe’).

Macron’s speech was thematically wide-ranging. In practice, the discussion over the next few months and perhaps years is likely to focus on the three topics of Euro governance, migration and defence, the issues at the centre of the recent crises, precisely involving the Euro, migrants and security and defence (with conflicts spilling over from the Middle East, an aggressive Russia and uncertainty caused by Trump’s stance on NATO). On all three there are already some EU-wide policies in place. But, at the same time, member states, especially big ones, have been very reluctant to give up control and hand over authority from the nation-state to the EU.

The way Macron wants to move these dossiers forward is through a French-German deal. He apparently wants to win over Germany to at least some of his ideas, creating momentum by moving the two biggest and most powerful countries (especially after the Brexit vote) behind a joint agenda. The key question is whether Germany is ready to tango.

Macron has chosen a moment for his opening salvo that is unfavourable for the German Chancellor. Merkel is in the midst of complex coalition negotiations –which might only come to fruition at the end of the year– and is therefore unable to say anything of substance in response to Macron. For Berlin, starting the debate early next year would have made much more sense, with a German coalition in place that has made up its mind about the EU and ready to enter into talks with Paris, Brussels and other capitals about reform projects.

With regard to the substance of the Macron proposals, there is certainly some room for a deal. The point, however, is: will the deal be merely symbolic rather than truly make a difference in substance? Macron and Merkel are both keen to demonstrate to their domestic audiences and to Europe that ‘the tandem’ is still driving European integration forwards. But, on the other hand, both countries have well-developed views on the issues that are pulling them apart.

On Eurozone governance, France continues to seek greater risk-sharing and more flexibility. This is exactly what Germany has rejected in the past –even with the SPD in a coalition government with Merkel’s CDU/CSU– and is likely to reject in the future, favouring instead more pressure on member states to reform. A significant Eurozone budget (Macron spoke of ‘several percentage points of GDP’) seems to be a no-go for Berlin, especially because the FDP –one of Merkel’s partners in a ‘Jamaica’ coalition– is strongly opposed to it. The creation of the office of a Eurozone Finance Minister may be possible, but given the contrary views of France and Germany it would only have a rather modest portfolio that would not really justify the title. The bottom line is that the difference of views between Germany and France, which also reflects broader differences between the South and the North and North/East of the EU, is here to stay and will very much limit the potential for reforming Eurozone governance.

On defence, Germany and France appear to be more on the same page. Nevertheless, Macron’s call for ‘a common intervention force, a common defence budget and a common doctrine for action’ is likely to fall on deaf ears in Berlin. Even more so as the focus for the deployment of such an intervention force would be, as Macron leaves no doubt, Africa, where France is substantially engaged and is looking for support. For Germany, defence remains geographically focused on the East rather than the South, and on territorial defence in the context of NATO rather than military intervention (for a good overview of the differences see Jutyna Gotkowska, “Franco-German tandem in EU’s security policy – industrial interests and military differences”). The disparity in focus, the result of significant divergences in the strategic cultures of the two countries, will make it difficult to find common ground beyond the level of limited, more symbolic, institutional innovations and declarations.

The issue on which Germany and France are most in tune is migration. The overhaul of the institutional set-up for migration will be a top priority for Merkel in her fourth term. With his call for ‘a common area for border management, asylum and migration’, Macron will therefore find a partner in Berlin. In this dossier there should be much common ground. But both Germany and France are of course aware of the deep East-West divide on migration and asylum in the EU. Most Central European governments have little taste for compromise on the issue after it became a major topic in the public discourse, with a majority of voters and parties strongly opposing the entry of larger numbers of refugees or migrants.

A ‘great leap forward’ in European integration is very unlikely to occur in the German-French discussions on the EU, which will probably start in early 2018. Both sides have well-established views on the main issues, reflecting their respective political cultures, and these have not converged in the past few years. Paris and Berlin will certainly come up with some joint proposals if only in order to keep up the growing optimism that has spread throughout Europe in the past months. Truly deeper integration, however, would require a much greater degree of convergence in views not only between Germany and France but also between the other EU members. Another round of overhauling institutions is not going to be effective if there is no substantial political will in the member states to breathe life into these institutions.