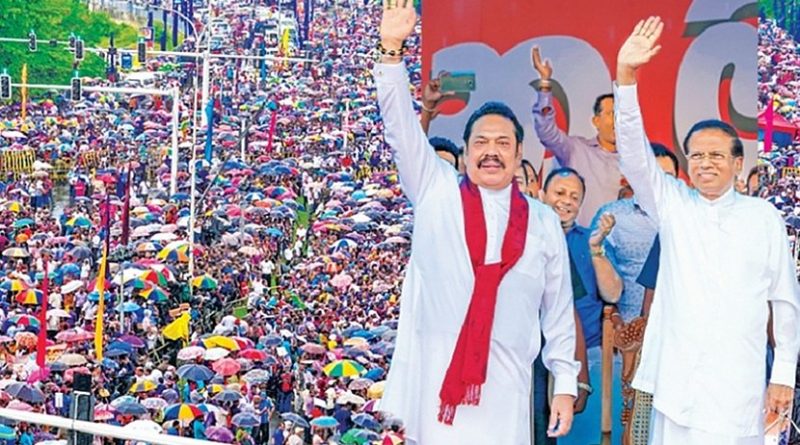 Sri Lanka’s President Maithripala Sirisena said that he has the majority of 113 to form “a formidable government.”

Sirisena said that farmers, government servants, fishermen, and the working mass who were gripped by the economic principles of Ranil Wickremesinghe should be freed.

“The decisions of the previous government were not taken by the President, Cabinet of Ministers or the Senior Ministers, but by a swarm of butterflies headed by the former Prime Minister,”  Sirisena said.

Sirisena made the comments while was addressing the ‘Rata Rakina Jana Mahimaya’  people’s protest rally at the Parliament Junction. The protest was held under the patronage of President Sirisena and Prime Minister Rajapaksa in support of the new government, which was appointed a week ago.

Sirisena said he was happy to be on the same political platform with Prime Minister Mahinda Rajapaksa after exactly four years. Speaking to the large crowds that braved the heavy rains, the President said that the appointment of Mahinda Rajapaksa as Prime Minister by removing former Prime Minister Ranil Wickremesinghe was Constitutional and legal. He said this appointment is not just the changing of two persons or two bodies to that chair, but also the removing of the vision that followed foreign agendas and was harmful to the state.

Sirisena said he appointed a new person who is state friendly and who has a clear vision for the country and one who would not bow down to foreign agendas.Amidst the thundering applause of the massive crowds, the President also said that the new government headed by him without any doubt would have a majority of 113 in Parliament.

Therefore, President Sirisena said the United National Party should not worry about that and he through the new government would strengthen Parliament. The President also requested former Prime Minister Ranil Wickremesinghe to let the new government proceed with its business without any hindrance.

Sirisena said that he together with Prime Minister Rajapaksa would make the necessary changes in the country to solve the economic problems. He also said that they would totally dedicate themselves to solving the issues of the people in the Northern areas. He said during his recent telephone conversation, the UN Secretary General assured him of the fullest support towards Sri Lanka for any decision taken to strengthen democracy in the country.

Therefore, Sirisena said that new government would forge ahead to create a prosperous country and establish the peace in the country while maintaining a friendly foreign policy.