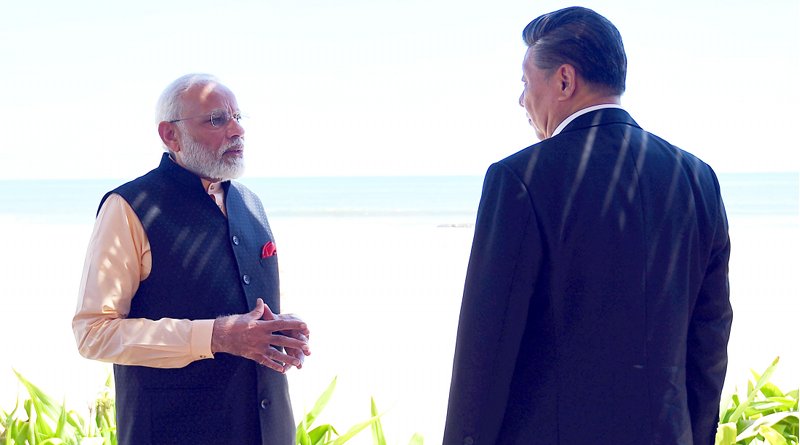 In the 1950s, when China-India ties were close, Delhi was among the first states to recognise Mao’s new China. All this changed with the 1962 border war. The recent Xi-Modi summit in India was aimed at ushering in a new prosperous “Chindia” century. How successful has it been?

The 1950s were the heyday of cordial Sino-Indian relations. In June 1954, Premier Zhou En-Lai visited New Delhi. The two sides signed a joint statement on the five principles of peaceful coexistence.

This included respect for territorial integrity, non-aggression, non-interference in internal affairs, and peaceful coexistence. This 1950s entente was epitomised by the popular Hindi slogan “Hindi Chini Bhai-Bhai” (“Indians/Chinese are brothers”).

China and India share a 4,000 km border. The October 1962 border war was caused by their dispute over the Aksai Chin and Arunachal Pradesh regions. Aksai Chin lies between the Indian state of Kashmir and China’s Tibet province. China conducts its nuclear testing at Lop Nor, Xinjiang. They also clashed at the Doklam plateau (Sino-Bhutanese border).

China’s influence in the Indian sub-continent is rising. Beijing has long-standing ties with Pakistan. India sees Beijing as intruding into its traditional sphere-of-influence. This notwithstanding, both countries have rebuilt friendly relations since the 1980s.

In 2008, China became India’s largest trading partner. In 2018, bilateral trade hit US$95.5 billion. India suffers from a huge trade deficit of $57 billion with China, the largest that India has with any country.

The second is the battle over telecoms giant Huawei. India is one of the key countries where Huawei wants to establish its 5G technology. Huawei is a major player in India’s smartphone market.

The third issue is Kashmir. In August 2019, India-China tensions rose after New Delhi’s move to revoke the autonomy of Jammu and Kashmir. The two rivals also have a border dispute in Ladakh, a strategic Buddhist-dominated region within Kashmir.

India has also been a vocal critic of China’s Belt and Road global infrastructure programme that includes a key project through Pakistan-administered Kashmir.

Fourth, border clashes. Besides Ladakh, India and China also have a decades-old dispute over Arunachal Pradesh, an Indian state bordering Tibet. China still claims about 90,000 sq km of territory. It is currently under New Delhi’s control.

China is competing with India for influence across South Asia. India worries about Beijing’s initiatives such as the Belt and Road project. This has boosted New Delhi’s support for the US-led Quadrilateral Security Dialogue to counter China’s assertive expansionism.

Notwithstanding their latent rivalry, China and India seem keen to take their ties to a new level, as seen on at least three fronts.

About 13,000 Indian students are studying in Chinese schools and universities. Two, India has concerns about the Regional Comprehensive Economic Partnership (RCEP). Modi said that a deal should be equitable, while Xi said he would look into India’s concerns.

He said that the only choice is for the “Chinese dragon” and “Indian elephant” to “dance together to serve their mutual interests”. Xi also called for efforts to raise the level of military exchanges and security cooperation to enhance mutual trust.

The positive results of the summit show that China and India are keen to fully normalise and boost mutually-beneficial cooperation. For China, improved ties with India would considerably strengthen its South Asian flank.

This would enable Beijing to deal more effectively against President Trump’s containment Policy. India hopes that its improved ties with Beijing would lessen China’s strategic links with its arch-rival Pakistan.

It would also reduce the impact of US trade protectionism on their economies. The normalisation of China-India relations portends an easing of tension and a more collaborative Chindia era.

Singapore is also the largest investor in India among the ASEAN countries. India and Singapore have robust economic and military ties. Singapore was among the first to respond to Modi’s “Look East” policy of expanding economic and strategic ties in Southeast Asia.

While India is strengthening its standing as a regional power, China is continuing its rise for dominance in the Asia-Pacific region. The future relationship between the two Asian powers will still be subject to the fluidity of the ongoing international power play.

*KB Teo is a former diplomat with the Singapore Ministry of Foreign Affairs who had covered Southeast Asia, Egypt as well as the Eastern Europe/Soviet desks. He had also attended the UN General Assembly as part of the MFA delegation.