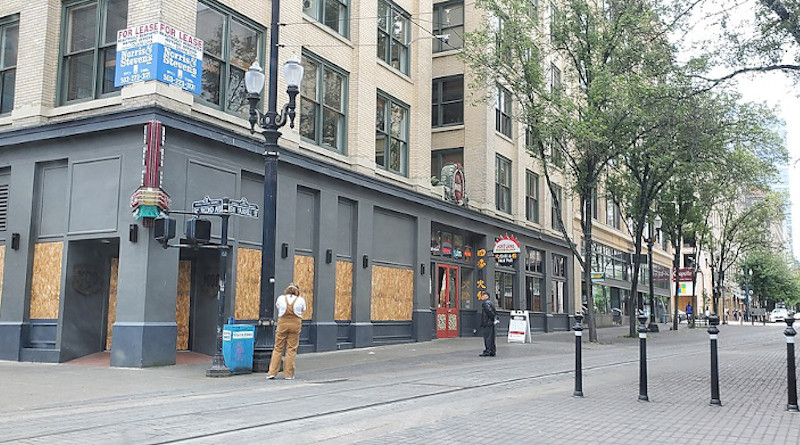 The Multnomah County Sheriff’s Office on the evening of Nov. 4 shared photos of shattered glass doors at the entrance to Saint André Bessette Catholic Church, located in Old Town Portland.

Sometimes known as the “Downtown Chapel,” Saint André Bessette has occupied several locations in the downtown Portland area since 1919. The present location, which the church has occupied since 1971, includes a drop-in center, a kitchen, and showers and washing machines for the homeless.

The protest began as a “Defend Democracy” rally, local news reported as election results were being reported.

According to police, two protest groups met in separate locations Wednesday evening, then marched through Portland. A group of about 100 people moved along West Burnside Street, breaking windows as they moved.

Police in Portland declared the protest Wednesday night a riot, and arrested at least 11 people. One of the people arrested had a rifle, several magazines of ammunition, an improvised explosive device, a knife and spray-paint cans, police said.

Gov. Kate Brown also activated the Oregon National Guard to assist with suppressing the riot. Brown released a statement Nov. 5 condemning the violence, specifically mentioning the damage done to St. André’s by a “group of self-styled anarchist protesters…with no discernible goal other than to cause violence and vandalism.”

“They shattered the windows of a church that feeds Oregonians in need, a women-owned and operated business that raises money for immigrant and women’s rights, and many other storefronts,” Brown said Nov. 5. “Indiscriminate destruction solves nothing.”

The pastor of Saint André Bessette did not respond by press time to CNA’s request for further comment.

Portland has seen months of street protests since the May 2020 killing of George Floyd by Minneapolis police, often taking the form of crowds of hundreds of people protesting, ostensibly, against racism, police brutality, and fascism.

Some of the protests have been accompanied by riots and looting. In addition to extensive property damage in the city’s downtown, there have been occasional incidents of violence within or adjacent to the protests, including shootings and stabbings.

Protesters in the city have toppled statues of Thomas Jefferson, George Washington, Theodore Roosevelt, Abraham Lincoln, and Harvey W. Scott, an editor of The Oregonian in the late 19th century.

The homeless drop-in shelter at Saint André Bessette has stepped up its efforts to help the poor during the coronavirus pandemic, offering free sack lunches every Tuesday, Wednesday, Thursday and Friday.

Students and families at Central Catholic High School in Portland donated more than 1,000 sack lunches to the parish in May, the Catholic Sentinel reported.

Archbishop Alexander Sample has repeatedly called for peace in the city. In July, he encouraged Catholics to learn about and study how to respond to the sin of racism, while at the same time condemning the violence accompanying many of the protests in the city for the past two months.

“This all began over the terrible, tragic killing of a man, and initially the outcry against injustice, against racism, was well-placed, and I have been very supportive of the peaceful demonstrations on behalf of justice and against racism,” Archbishop Alexander Sample said in a July 24 video message, referencing the protests sparked by the May 25 killing of George Floyd by Minneapolis police.

“But sadly, that’s not what this is about any more,” he said.

Catholics— and anyone, for that matter— should be outraged at the sin of racism, said Sample, but Catholics must be careful, rational and calm, and should avoid “virtue signaling,” instead putting in the work to grow in virtue and to turn to Catholic social teaching in response to racism.

More than 200 people participated in a Eucharistic procession Oct. 17, led by Archbishop Sample, for the intention of peace in the city.

Ahead of the procession, Archbishop Sample said that “There is no better time than in the wake of civil unrest and the eve of the elections to come together in prayer, especially here in Portland. The Catholic Church takes the promotion of unity, and accordingly peace, as belonging to the innermost nature of the Church. For this reason, the Church fosters solidarity among peoples, and calls peoples and nations to sacrifices of advantages of power and wealth for the sake of solidarity of the human family.”