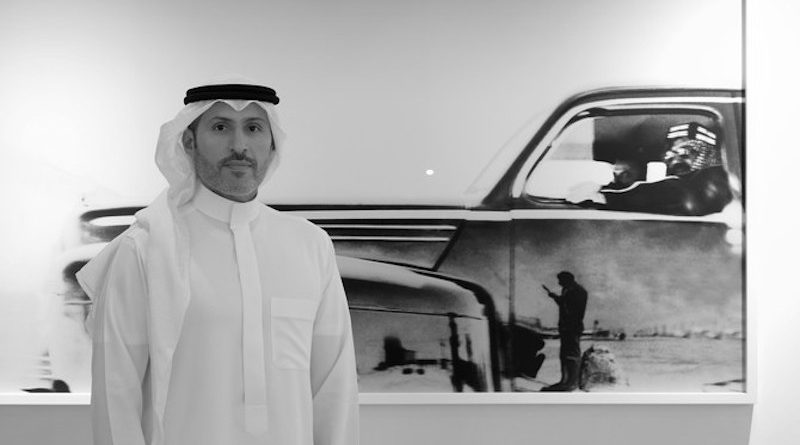 Inside the ancient walls of the Palazzo Rhinoceros gallery in Rome, Italy, Saudi artist Sultan bin Fahad is staging his first solo exhibition in Europe, “Frequency,” a multisensory exploration of spirituality that runs until Dec. 10.

The Palazzo Rhinoceros is a 17th-century palace located at the center of what was once Imperial Rome. It has been transformed by French architect Jean Nouvel and is now a residential arts hub and the new seat of Alda Fendi’s arts foundation.

Bin Fahad’s exhibition is spread over two floors and consists of six installations, each of which is designed to resemble a spiritual journey in which both the environment and rituals evoke emotions in the individual.

The buzz of background voices; the scent of incense, perfume and smoke; the sound of water; flavors and gestures; all of this combines to draw you into bin Fahad’s work and envelope you in an atmosphere of sanctity and ritual and spark a connection to the divine.

Bin Fahad, born into the Saudi royal family in Riyadh in 1971, began his artistic journey as a painter, but has since adopted a more expansive practice. His works focus on material culture in Saudi Arabia and explore themes including Islam, and Saudi history and identity. He has participated in solo and group exhibitions in galleries worldwide, including the UAE, the US, Italy, Saudi Arabia, and Palestine.

He searches regularly for antiques and bric-a-brac in varied and unexpected places, including flea markets and abandoned buildings or ruins, reimagining these found objects into artworks.

“One man’s trash is another man’s treasure,” he said — a motto borne out by his “Red Palace” exhibition in Jeddah in 2019, which he described as “a series of critical material investigations of the region.”

During that exhibition, bin Fahad was approached by the Fendi foundation team and invited to represent Saudi Arabia in their unique centuries-old gallery in Rome, he explained to Arab News.

While researching both the history of the building and of Rome’s position as the home of the Catholic Church, bin Fahad began to look for a common link between himself and the city. So he decided to explore spirituality through his personal spiritual experience as a practicing Muslim, because that is what he is familiar with and that is what impacted him and his artistic practice.

“The journey that I tell is the one to the heart: the temple of the deepest feelings,” bin Fahad told Arab News. “You do not see and feel what other people feel or see. You are alone with yourself, right at the moment that you are looking for the greatest feeling of humanity and belonging.”

The exhibition aims to imitate people’s experience when they visit religious sites and try to connect spiritually through all their senses. Visitors should be provoked by and engage with the exhibition’s journey, but without limitation or expectations. Bin Fahad does not seek to force a specific perspective onto them.

The six installations light up like candles in the dark thanks to the lights that shape the works in the dimness, and the video projectors that display words and images in concentric and continuous loops.

The artist wanted to reconstruct a spiritual experience through distinct installations that tell the history of intimacy in each of us: the ritual, the sign, the voice, the hands, the water, the sounds. One of the pieces, “Possession,” consists of an image of hands trying to touch the tomb of Prophet Muhammad. “White Noise,” meanwhile, occupies two rooms in which recordings of pilgrims’ prayers in Makkah play. “If Stone Could Speak” is a video piece showing men and women praying.

He has blended religious antiques with new technologies and old gestures — rituals as vehicles of meaning — as well as syncretism, to take visitors on a journey that sparks curiosity and the questioning of personal beliefs, and an awareness of the inner-self and others.

“All the recordings I made in Madinah and Makkah, as well as the pieces used, are real and organic, they were not staged, everything is authentic,” bin Fahad pointed out. “I was witnessing how people behaved behind the curtains and picked up my phone and recorded that. In truth, it is the starting point for a timeless and placeless journey where people can find themselves united by the search for the root of their being and their existence.”

The gallery itself helps reinforce the atmosphere of the exhibition. The architecture complements the pieces, and invokes a certain mood, while the flow of “Frequencies” creates a harmony between physical, sensory and mental planes.

As bin Fahad explained, “Frequencies” — like so many cultural events — was delayed by the COVID-19 pandemic. But in this case, he said, that delay actually proved to be a positive thing.

“The exhibition was meant to be in March, but the pandemic and lockdown canceled everything,” he said. “However, the development and the progress that led to the launch of the exhibition now has matured the experience into the right development, and I’m very happy with that.”

He believes the exhibition is particularly appropriate at this time, after all that has happened in the world during 2020.

Bin Fahad told Arab News that the exhibition had received a lot of positive feedback so far, and that many people would like to see it recreated in Saudi Arabia, a possibility he is equally excited by.

For bin Fahad, art is a bridge between intangible memories and tangible cultures. In his practice, he reinterprets narratives by transforming objects — a contemporary means through which to assess and present his personal take on Saudi Arabia.