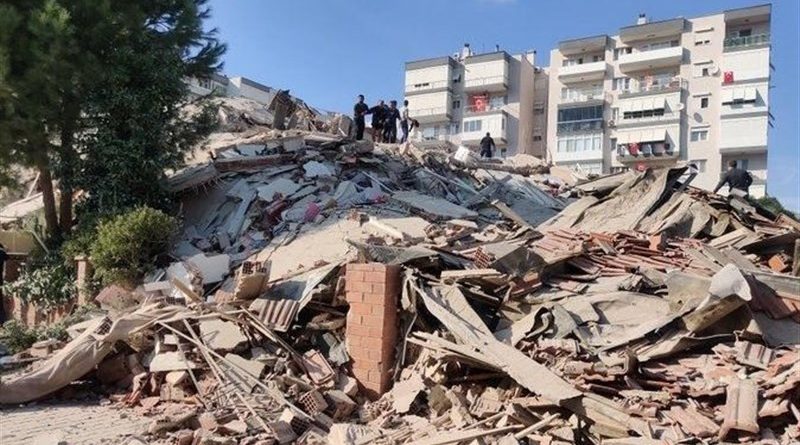 A strong earthquake of magnitude of up to 7.0 struck the Aegean Sea on Friday and was felt in both Turkey and Greece. Photo Credit: Tasnim News Agency

In the aftermath of the magnitude 7.0 earthquake in Izmir last Friday that killed at least 110 people, pressure is growing on the Turkish government to explain what happened to billions of dollars raised by a mandatory earthquake tax Turks have been paying for more than 20 years.

The tax was introduced after a magnitude 7.4 quake in the Marmara region in 1999 that killed 17,000 people. The money from it is supposed to be used to fund projects to reinforce buildings and prepare cities to better cope with earthquakes.

However, experts and opposition politicians say that much of the revenue from the tax was not spent on earthquake-protection measures, and there are growing calls for detailed information about how the money was used.

Turkish citizens have paid as much as 147.2 billion Turkish lira ($17.5 billion) in earthquake taxes since 1999. The country’s main opposition Republican People’s Party (CHP) accuses the government of misusing more than 71 billion lira that should have been used to protect cities from quakes.

On Thursday, prominent Turkish journalist Fatih Altayli said that since 2011 some of these taxes might have been spent on dealing with about 5 million Syrian refugees. Turkey has received €6 billion ($7bn) in EU aid to help the country cope with migrants and refugees.

This allegation was also raised by CHP leader Kemal Kilicdaroglu during a parliamentary speech. He asked where the earthquake taxes went and added: “But when it comes to Syrians, there is a lot of money.”

Alpay Antmen, a lawyer and CHP politician, told Arab News: “This money was meant to be used for urban transformation and for making housing areas in the earthquake zones much more resilient. However, about 70 billion lira of these taxes was spent on other purposes, and this capital was transferred to the builders close to the government.”

Last year, he said he submitted a parliamentary inquiry to Treasury and Finance Minister Berat Albayrak about the use of earthquake taxes. He was referred to the Interior Ministry, which told him it had no information.

“They are collecting these taxes from taxpayers as earthquake taxes, then they merge it into the general budget,” said Antmen. “The financial resources of the government are so depleted that it uses all available tools.”

AFAD, Turkey’s Disaster and Emergency Management Agency, which operates under the Interior Ministry, was harshly criticized for its response to the Izmir earthquake, after it asked people to send a text message if they needed blankets.

Allegations of corruption in the use of earthquake taxes are not new. In January, for example, President Recep Tayyip Erdogan responded to such claims by saying: “We spent it where it was meant to be spent … we do not have the time to provide accountability for matters like this.”

The CHP is now calling the government to account and demanding full transparency about how the taxes were used.

“When you spend the money of the citizens, you have to account for it,” said Antmen. “Otherwise it is unacceptable. Tens of billions of dollars have, however, been squandered for the relief of pro-government contractors’ debt burdens.”

CHP said that had revenue from the earthquake tax been used properly, millions of buildings around the country could have been strengthened to help them survive powerful earthquakes that are expected to hit Turkey, which lies on several active fault lines, in the coming decades.

Home » Turkey: Pressure Grows On Government Over Use Of Earthquake Taxes