However, gasoline consumption is expected to decline both in absolute terms and as a share of total transportation fuel demand, due to the introduction of more stringent corporate average fuel economy standards as well as demographic and economic changes. Petroleum-based diesel fuel is projected to account for a growing share of petroleum-based transportation fuel demand, but growth in its use is moderated by increased use of liquefied natural gas (LNG) or compressed natural gas (CNG) and gas-to-liquids (GTL) fuels in heavy-duty vehicles.

Crude oil production, particularly from tight oil plays, continues to rise sharply in the AEO2013 projection through 2019, when production reaches 7.5 million barrels per day (bbl/d) (Figure 1). Growth is driven largely by a significant increase in onshore production, particularly from shale and other tight formations. After 2019, production declines gradually, falling to 6.1 million bbl/d in 2040. This decline reflects a decrease in tight oil production as producers move from sweet spots to less-productive or less-profitable areas. Production of natural gas liquids also grows significantly over the coming decade.

Overall, light-duty vehicle liquid fuel consumption, the main component of which is gasoline, is lower in AEO2013 than in AEO2012 primarily due to the recently enacted fuel economy and greenhouse gas emission standards. Projected gasoline consumption in the transportation sector is reduced by 0.5 million bbl/d in 2025 and by 1.0 million bbl/d in 2035 in AEO2013 compared to the AEO2012 Reference case (Figure 2). 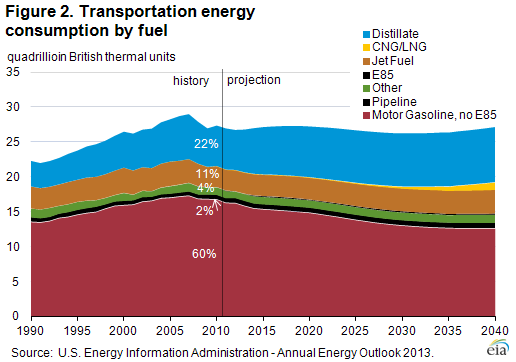