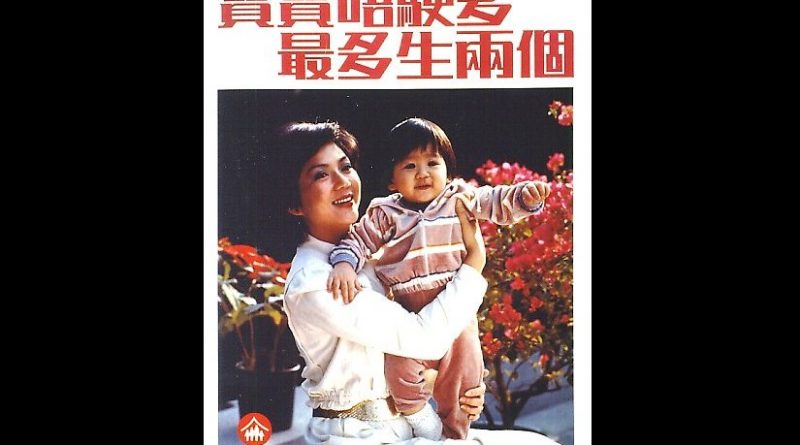 Hong Kong, the Two is Enough campaign in the 1970s encouraged people to have two or fewer children in each family, contributing to the reduced birth rate in the following decades (poster with actress Fung Bo Bo). Credit: Wikimedia Commons

The ending of China’s one-child policy, which gained notoriety for its coercive implementation, is a landmark event of immense economic and political significance, but there are serious question marks about whether it can effectively produce the positive economic fallout that its architects expect.

The importance of the October 29 decision of the Communist Party of China (CPC) to jettison the 35-year-old draconian one-child policy in favour of a new, universal two-child norm is primarily political as underscored by the fact that the announcement was made in a communique released at the conclusion of the four-day conclave – Fifth Plenum – of the CPC’s 18th Central Committee.

The main purpose of the plenum was to finalise China’s 13th Five-Year Plan – the first since Xi Jinping became President – and map the road ahead for the world’s second largest economy, which has had to contend with a falling growth rate in the last few years. China now aims to strive for a GDP growth rate of 6.5 to 7 percent during the five years of this Plan ending in 2020.

Some observers have even gone so far as saying that the CPC’s decision on the country’s birth policy is almost as important as Deng Xiaoping’s signal to open up the economy for reforms in 1978.

It was the overriding compulsion to ensure the success of Dengist reforms that dictated the adoption of the one-child policy, also in 1978, to be ruthlessly enforced from 1980. Paradoxically, the market forces unleashed by Deng were celebrated for economic reforms but not seen as being based on the political and bureaucratic tyranny of the one-child policy.

If the coming into force of the one-child policy was ‘historic’, then the reversal of the policy is no less historic. The excesses of China’s one-child policy – such as forced abortions and sterilisations, denial of residence permits and jobs, and exclusion of “illegal” children – were much worse and affected a wider section of people than the thuggishly-executed terror of population control that Indians suffered during Indira Gandhi’s “Emergency” (June 1975-March 1977).

Fear of the consequences had its effect on Chinese couples. “Ten years after my marriage, my husband and I wanted at least one sibling for our six-year-old daughter,” said shopkeeper Yan Xu (not his real name). “But we weren’t allowed to do that in the 1990s. Couples who went against the rules and had a second child lost their jobs. The second child also had no legal status. So we gave up on the idea.”

The CPC credits the one-child policy with preventing 400 million births in the last 35 years, thus contributing to China’s turbo-charged growth since the 1980s. The one-child norm addressed social, demographic and economic concerns that could have been hurdles to the reforms inspired by “paramount leader” Deng Xiaoping.

The two-child policy being widely welcomed has to be seen in this context – where strong-arm methods of enforcing Deng’s birth control policy would become a thing of the past. The horrors of that policy and the nightmare it became to hundreds of thousands are now being openly recounted in the Chinese media. What emerges through these stories, which were always known but not told as it is now narrated and prominently put out by the media in China, is that people feel somewhat liberated, freed of a certain lurking fear, about which they could not speak in public.

At a broader level, this is reflected in the ongoing open debate, with divergent views being expressed on the demographic consequences, economic prospects and political impact of the, literally, life-changing decision for millions. Whether viewed through the prism of politics, demography or economics, it seems to be a positive decision, one which the state could not have avoided for much longer for reasons that are obvious.

The relaxation of the one-child rule, which did not apply to minorities and rural families, began in 2013. If either of a couple was the only child, the couple was allowed two children. This easing of the norm was seen as clearing the ground for scrapping the one-child law in the course of time.

Thus, it was a matter of time, which was utilised to encourage open debate of the policy especially in academic circles, and political timing – before the ruling party formally announced the two-child policy.

Coming to the economic assumptions linked to the decision, these are unlikely to be borne out – at least in the near term; in any case, that is what the demographic trend of recent years indicates. The economic slow-down has raised concerns about China’s ambition of emerging as an all-round, “moderately well-off society” in the CPC’s 100th year.

As the official China Daily observed: “These five years are likely to be make or break, and the country will either be mired in the dreaded middle income trap, or survive the pains of transformation and accomplish a sustainable economic rebirth.”

An ageing population, with a decline in the number of those in the working age of 16-59, has added to the worries arising from the slow-down. The ageing population not only does not constitute part of the labour force but is a drag on the productivity of the population in the working age group, especially when young couples have to look after ageing parents in the absence of adequate social, structural or financial support from the state.

A decline in the working population also means a decline in consumption and spending; which, in turn, further weighs on an economy looking to boost growth through consumption especially at a time when exports are falling.

There is no way that the two-child policy can alter any of these facts, figures or trends in the short-term; and, after that, too, it would be overly optimistic to expect a sudden surge in the working population. On the contrary, current evidence suggests that the prevalent demographic trend is likely to continue – because of a lower fertility rate, and also because only a small percentage of those able and “eligible” are willing to go in for more than one child.

In 2013, when the birth control policy was relaxed – allowing a second child where one spouse was an only child – an estimated 11 million couples were eligible to add one more to the family. But, less than 10 percent (1.1 million) of these – not even 2 million as expected officially – had applied to have a second child.

On today’s calculations, 90 million couples are eligible to have a second child. If the experience of 2013 is anything to go by, it is expected that not even 10 percent of those may exercise that option. Besides, the bulk of those who go in for a second child may be rural families because they tend to be more interested than ‘urbanites’ in having bigger families.

In urban areas, few families even want more than one child and, rapid, widespread urbanisation has reinforced the one-child norm. Urban living is expensive, stressful and too restrictive to support large families. There are many deterrents to child-bearing. Rising costs of housing, nursing and education, lack of adequate social, familial and state support for child-bearing alongside late marriages and more women joining the workforce are only a few of the reasons for most couples opting for one child or no child.

Meanwhile, with the fertility rate falling to 1.5 percent on average, another distressing fact is the gender ratio where males outnumber females. Such an adverse ratio, as the Indian experience has also shown, can have undesirable social consequences.

Apart from the declining falling fertility rate and the imbalanced gender ratio, which do not encourage expectations of the “balanced population growth” required for an economic transformation, the ratio of children in the population is also falling. The dwindling child population reinforces the perception that fewer couples are going in for more than one child.

If one-child families are the norm, no-child families are increasingly the fashion. The declining child population also indicates that the shortage of economically productive workers would continue and is unlikely to be remedied by the two-child policy.

The one-child policy created the ‘Little Emperor Syndrome’ of only children being pampered with excessive amounts of attention from parents and grandparents. But this one child was king only until his parents retired, when he and his wife (again with just one child) were likely to find themselves supporting both sets of parents (besides any surviving grandparent) with their limited space, income and resources.

Those born in the 1980s, and now be in their mid-thirties, are unlikely to risk another child in a system where social security, including pensions, is far from adequate. Neither the children of the 1980s nor those born in the 1990s responded in overwhelming numbers to the limited easing of the one-child policy in 2013. Many of child-bearing age can either not afford or do not want a second child because of the expenditure associated with bringing up another child.

All of this adds up to a scenario in which:

“The two-child policy won’t lead to a baby boom,” argues Prof Mu Guangzong of Peking University’s Population Research Institute. “The reform is not likely to make a big dent in the trend of population growth. Over the past two years, husbands and wives of child-bearing age have not responded positively to the two-child policy.”

According to Guangzong, “more aggressive approaches would be required to reverse the trend and fuel population growth … [Besides] the looming labour shortage will upset sustainable socio-economic development.”

The policy paving the way for more babies to be brought in to the world by making baby boomers of those born in the 1980s and 1990s cannot succeed unless, for example, the ageing population is provided for and taken care of. According to one report of the 13th Five-Year Plan, nearly 200 million have yet to be covered by the insurance plan for the elderly.

China, which has a record of achieving targets – and well before the stipulated date – may fall short of the mark when it comes to an increase of 30 million in the working-age population by 2050.

China needs a baby boom. Yet it would be premature to expect or fear one unless the CPC’s new population policy extends to correcting distortions in the population structure and forms part of a larger and more encompassing reform strategy focused on sustainable livelihood for all, including the aged.

*Shastri Ramachandran is an independent political and foreign affairs commentator.