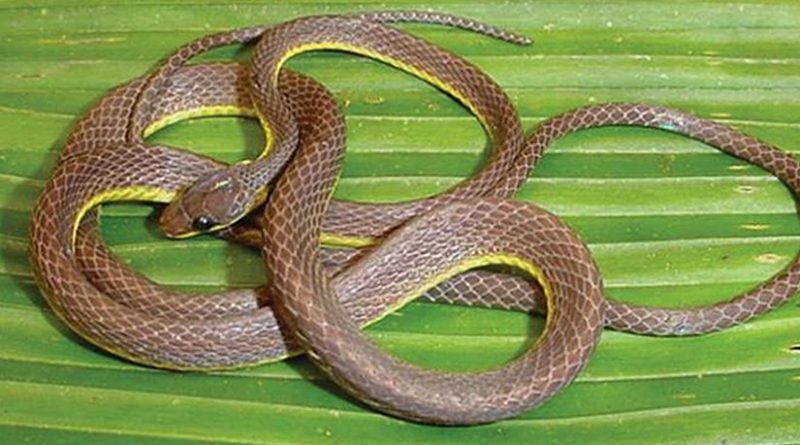 Extremely rare and hidden in the forests of the Andes, there are still new snake species left to find. This has recently been evidenced by the colubrid serpent, described for the first time in the present article. Moreover, there is the vicious circle enwrapping its relatives: the harder it is to find more specimens, the tougher it is to describe and thus, start to identify them, which does not help in mapping their distribution and habitats.

To address this issue, Dr. R. Alexander Pyron, The George Washington University, and his international research team have included a taxonomic review and discussion on the relationships and origin within a non-venomous snake tribe in a paper, published in the open-access journal ZooKeys.

Slender and small, the new species, called Synophis zaheri, measures less than 40 cm in length, or between 351 and 372 mm. Contrasting to its slim body with a distinct neck, separating the head from the body, its eyes are large and bulging, making up for more than a third of its head. Being black in colour, it is hard to tell the pupil and the iris apart. While the upper part of the body is grayish-brown with an iridescent sheen, the abdominal side stands out with its yellowish-white coloration.

Typically for the tribe, where the new species has been placed, it is also characterized with a highly modified spine and an enlarged scale row running over it. This is also where the name of this group of snakes comes from with “Diaphorolepidini” consisting of the Greek words for “differentiated” and “scales”. Not so clear, however, is the name of the genus, which the authors have translated also from Greek as “with snake”, but find themselves unaware of the meaning behind. The species is named after Dr. Hussam El-Dine Zaher, a Brazilian herpetologist whose work has been foundational for South American snakes.

In conclusion, the scientists note that the rarity of the observed snake species, especially the genus, where the new serpent belongs, accounts for the unclear species-boundaries as well as for the myriad of undescribed species. “Dipsadine diversity in the Andes is clearly underestimated, and new species are still being discovered in the 21st century,” they point out.