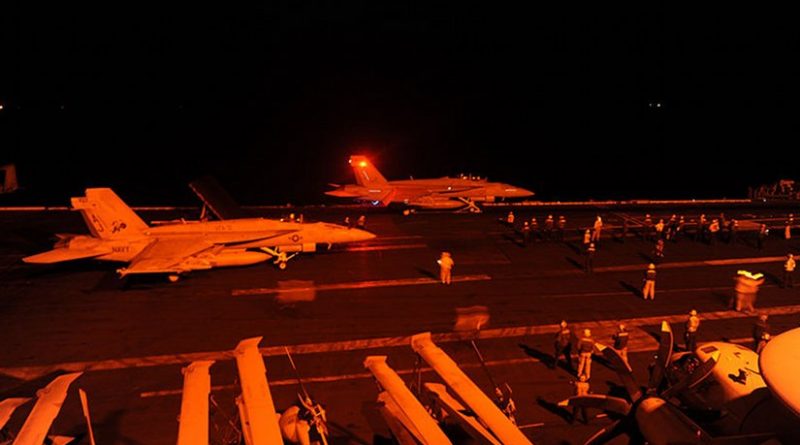 According to the Nation magazine and many others, there are two options available to the US government. One is increased hostility perhaps leading to nuclear war with Russia. The other is a joint US-Russia-and-others war on ISIS.

Many in the United States who generally oppose war and who look for information outside the US corporate media manage to recognize the US focus on overthrowing the Syrian government, with Iran next on the list. They notice the lack of US concern over Saudi and Turkish assistance to ISIS. And at least in the backs of their minds they remember that the destruction of Iraq was the critical ingredient in the creation of ISIS.

But they’ve been as frightened by the beheading videos as any Donald Trump fanatic screaming for the eradication of Muslims — all right, maybe a bit less frightened, but still very frightened. So they find refuge in the idea that Russia really wants to destroy ISIS, and they urge the United States to help. The alternative of war with Russia is unthinkable. But why in the world should that be the only alternative?

A Russian media outlet, no doubt hoping I would advocate a unified war on ISIS, sent me these questions on Thursday. First they wanted me to comment on this remark by President Vladimir Putin: “Today we are again facing the destructive barbaric ideology and we do not have the right to allow that the newly found obscurantists reach their goals. We need to throw away all arguments and differences to create one powerful fist, a united antiterrorist front which would act on the basis of international law and under the UN auspices.”

Second, they wanted me to comment on these statements by Putin: “Russia has many old, reliable friends in Turkey, who should know we don’t put them on level with ruling top officials.” and “Russia knows who in Turkey [is] making money on stolen oil, recruiting fighters.”

I sent back these answers, asking them to use all or nothing, which I suspected meant they would use nothing:

1. What President Putin proposes and many even on the left in the United States support, a united front against terrorism sounds right until you examine the details. He means a united war, a united bombing of people’s homes, a united counterproductive effort to make things better that will make things worse, using large scale terrorism to produce more small scale terrorism. This may be better than a disunited front. It’s certainly better than a nuclear confrontation between Russia and the maniacs so respectably running Washington D.C. straight toward armageddon, but it’s not a solution to the problem, it’s not an alternative to destructive cycles of violence, it’s just a different spin on the same wheel.

2. Washington would rather be wrong than agree with Russia. NATO would rather die than agree with Russia, for if it agrees with Russia it loses its reason to exist and dies anyway. What does bringing the world down with it matter? Yes, of course, the United States is less interested in destroying ISIS than in destroying Syria, but a big strong united focus on destroying ISIS will never destroy ISIS. It will only spread it across the globe. Imagine the a united front kills everyone in half of Syria and Iraq, as would have to be done to destroy ISIS. Muslim hatred of the United States would sweep the globe and Muslim hatred of Russia, and bombs in Russian airplanes, right along with it. Is that what Putin wants? Is that what Russians want? A united attempt to actually seriously reduce, rather than increase, terrorism would establish a ceasefire, an arms embargo, humanitarian aid, assistance to refugees, and the sort of intense investment in green energy that right now only goes into killing people.

To these comments I received the reply:

“I would use all, personally. Some of the things you wrote here, I’m afraid, are controversial for our editorial board as the main idea here in Russia is that it is ‘better to fight IS in Syria and Iraq than on Russian territory.’ Many Islamist volunteers from Northern Caucasus promise to come back to Russia and kill innocent people in terrorist acts. We have lost a full plane of civilians flying from Cairo and many people here are afraid. However, I promise to send your message (which I think was your main point) that ‘a big strong united focus on destroying ISIS will never destroy ISIS.’ This quote I will necessarily include. Thank you for your understanding!”

Sound familiar? Fight em there, not here. Use blowback to justify escalation. Where have we seen this movie before?

I failed to be understanding and asked them to use nothing of my quote rather than part of it. They agreed to use nothing, no hard feelings. I encouraged them to think about this:

Generating more terrorism is not a solution to terrorism, and the excuse of being scared and unable to think straight still leaves mistaken thinking. The United States has demonstrated these mistakes for years now. I remember when Russians pointed out that the United States had made all of Russia’s earlier mistakes in Afghanistan and moved on to new ones; that was right, and the United States refused to listen. Don’t, Russia, make all of the US mistakes in Iraq and start inventing your own. This path leads to hell.

I sent that to my Russian journalist friend who was sounding identical to a war-supporting American of exactly the sort that peace activists usually disagree with. The next response I received only heightened the similarity with US war advocates and US media:

“I personally agree however I do not understand how could we stop Islamic State. What is your recipe?”

I sent back this:

I’ve been answering this for well over a year many dozens of times at http://davidswanson.org

Here’s an answer this week from a former ISIS prisoner.

Here are former US officials explaining how what they did until the moment they retired was counterproductive.

I believe that was sincere. But I wonder what the “editorial board” will read. I suspect Russian and US editorial boards could swap their reading lists and hardly notice, just like ISIS and anti-ISIS fighters swapping the US bullets in their US guns.

Reprinted with permission from DavidSwanson.org.

Home » War With Russia Or With Islamic State: What Ever Happened To Peace? – OpEd

One thought on “War With Russia Or With Islamic State: What Ever Happened To Peace? – OpEd”