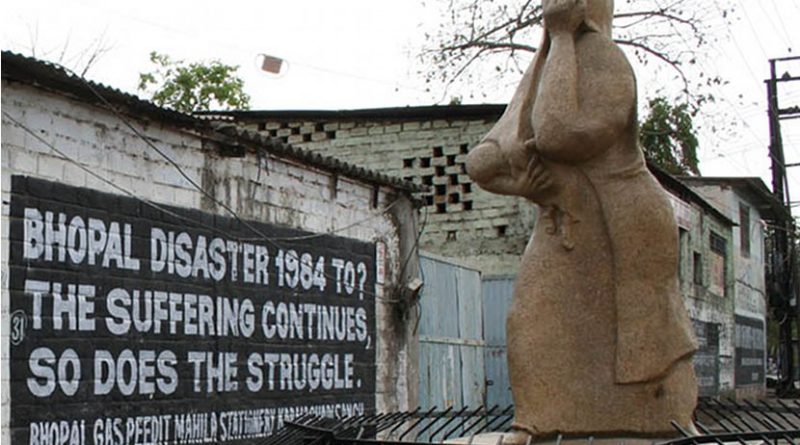 Bhopal memorial for those killed and disabled by the 1984 toxic gas release. Photo by Luca Frediani, Wikipedia Commons.

The Bhopal gas tragedy In India took place on December 3, 1984, which was around 33 years back and now stands as monument for the inhuman approach of a multinational company towards the poor and innocent Indian victims. Around 42 tonne of methyl isocyanate gas leaked out from the plant that killed around 20,000 people and severely affected around 0.5 million people who lived near the plant site.

Poor maintenance of the hazardous plant

The author of this article had the opportunity to visit the plant site of Union Carbide at Bhopal a few weeks after the accident and saw the facility including the equipment from where the gas leaked. It was obvious that the gas leak occurred due to poor shop floor practices and inadequate maintenance of the equipment.

It was an accident that could have been prevented, if the maintenance activity of the plant had been conducted with care and with appropriate management practices. Obviously, this was not done.

Owners and managers ran away

The then Union Carbide management was entirely responsible for this accident and this is an indisputable fact.

Around 0.5 million people were allowed to live near the plant site and they were all poor people living in small hut like dwellings. They have not been cautioned about the hazardous nature of the operations of the pesticide plant . Knowing that highly toxic chemicals were used in the process plant, no steps were taken by the government to shift the residents away by providing them alternate accommodation.

In all probability, the management of the Union Carbide also did not take any steps to request the government to shift the people living around the facility. If Union Carbide had found that the people living around could not be shifted away, it could have taken steps earlier to shift the plant facility to some other area away from densely populated zone.

Obviously, Union Carbide thought that such a grave accident would never happen and it had big confidence about it’s capability to maintain this plant at safe level , which was proved to be false.

Union Carbide is guilty of maintaining the plant facilities in a careless way, particularly considering the fact that toxic gases were being used in the plant.

When the accident happened, the management of the Union Carbide simply ran away from the scene with least care for the plight of the victims.

When Dow Chemicals took over Union Carbide, it knew about the suffering of the people due to the accident and it took over the exposure liabilities.

The subsequent attitude of the Dow Chemicals in dealing with the Bhopal gas tragedy was shocking.

Against the original damage claim of 3.3 billion USD, Dow Chemicals ultimately paid only 470 million USD. And Dow Chemicals gave an impression that it thought that it’s responsibility was over with the payment of this money, which only revealed it’s insensitivity towards human suffering, which was caused by the inefficiency of Union Carbide, that was taken over by Dow Chemicals later on.

One cannot but think that there is pettiness on the part of the multinational outfit which has failed in taking adequate measures to rehabilitate the victims of the gas leak.

The multinational company may have won the court case but remains as a guilty outfit in the eyes of the discerning people.

Except giving some money as compensation which is much less than what the poor victims deserve, the company has virtually run away from the scene and now has a permanent scar on it’s face.

Is DowDuPont any better?

Now, Dow chemical and DuPont, the two multinational companies have merged to form a new company known as DowDuPont. Obviously, in the merger decision of the two companies, there was no consideration about the responsibility of Union Carbide/ Dow Chemicals towards Bhopal gas victims.

DowDuPont is the new entity that now has to bear the cross for Union Carbide / Dow Chemicals causing so much of sufferings and then remaining unmindful of their plight and simply satisfying itself by paying a small compensation amount unequal to the level of tragedy.

The fact that during the merger of Dow Chemicals and DuPont to form a new entity DowDuPont , the plight of Bhopal victims was not even mentioned, expose it as an organization with guilt.

While this multinational company DowDuPont is rolling in wealth and with enormous money and muscle power, it stands condemned for ignoring the plight of Bhopal gas victims when Dow chemicals and DuPont merged.

Every employee of Dow DuPont should hang his/her head in shame at the type of attitude displayed by the company, which amounts to inhuman attitude.

Directors of DowDuPont have now shown themselves to be those, who practice business management without ethics and humaneness. The curse of the poor victims ,dead and alive ,are there for all to see.