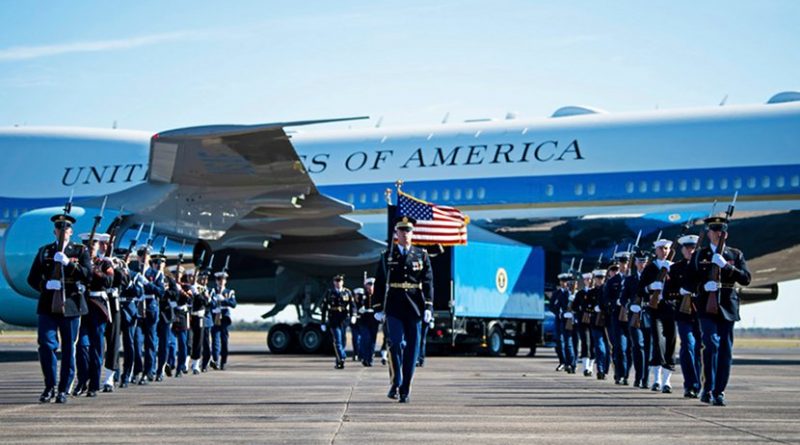 Eulogies hailed former President George Herbert Walker Bush as both a great and a good man at a state funeral service at the Washington National Cathedral on Wednesday.

The nation’s 41st president died Nov. 30 at the age of 94. President Donald J. Trump and former presidents Barack Obama, Bill Clinton and Jimmy Carter attended the service to pay respects to Bush and to offer condolences to his family and to Americans.

All spoke of Bush’s energy, compassion, humility and values. “His life code was: Tell the truth. Be strong. Do your best. Try hard. Forgive. Stay the course,” said Meacham, a Pulitzer Prize winner. “And that was, and is, the most American of creeds.”

All said that Bush’s Navy service during World War II affected him throughout his life. During a bombing run on the Japanese-held island of Chichi Jima in 1944, Bush’s plane was hit. He completed the bombing run and turned to the sea. He called on his two crewmates to bail out and then hit the silk himself. He landed in the water and was later recovered by the submarine USS Finback.

His son said his father embraced life because he almost died twice: as a teenager with a staph infection and “a few years later, he was alone in the Pacific on a life raft, praying his rescuers would find him before the enemy did,” he said. “God answered those prayers. It turned out he had other plans for George H.W. Bush.

“For Dad’s part, I think those brushes with death made him cherish the gift of life,” he continued. “And he vowed to live every day to the fullest.”

Bush came home from war and married his love, Barbara, and the young family moved to Texas, where the elder Bush entered the oil business.

But the call to public service was strong, and he was elected to serve in the House of Representatives. He later served as the director of the CIA, led the U.S. liaison office in China before formal diplomatic relations were established, ands served as the U.S. Ambassador to the United Nations. In 1981 he took office vice president of the United States. He was elected president in 1988, succeeding President Ronald Reagan, the first vice president elected to succeed his president since Martin Van Buren succeeded Andrew Jackson in 1837.

All the eulogists spoke of Bush’s efforts in foreign policy. Operations Desert Storm and Just Cause, the fall of the Berlin Wall and the implosion of the Soviet Union were just a few of the momentous events during his presidential service. They also spoke of the American with Disabilities Act that he signed and his support for environmental laws and his courage to reach across the aisle to hammer down a bill that put the United States on a sound fiscal path, even though it cost him his second term.

“I believe it will be said that no occupant of the Oval Office was more courageous, more principled and more honorable that George Herbert Walker Bush,” Mulroney said.

The younger Bush said his father was a mentor to many –- including the man who defeated him in 1992, Bill Clinton.

“Of course, Dad taught me another special lesson: he showed me what it means to be a president who serves with integrity, leads with courage and acts with love in his heart for the citizens of our country,” Bush said.