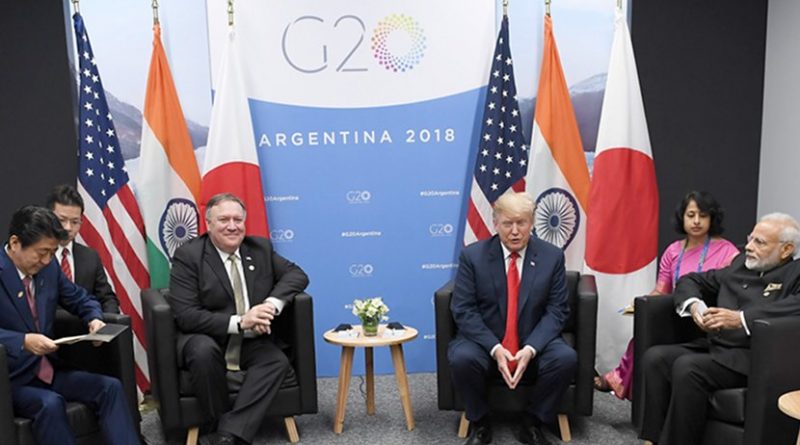 Indian Prime Minister Narendra Modi’s visit to Singapore in mid-November 2018 was an exercise in strategic autonomy. He gained time to carve a comfort zone for India in a proposed regional economic pact which will include China. He also signalled closer strategic rapport with the United States.

A major multilateral project of ASEAN is the planned Regional Comprehensive Economic Partnership (RCEP). The pact will encompass all 10 members of ASEAN and six among its dialogue partners. With China, India and Japan, but not the United States, on board, RCEP is potentially the largest economic bloc in the East.

Being negotiated for several years so far, RCEP has now been put off for “conclusion” in 2019. Primarily, this followed ASEAN’s acceptance of India’s reservations based on its cost-benefit calculus at this stage.

India was not alone in desiring an economic pact which could substantially meet the priorities of all parties in regard to key parameters such as goods, services, investment and e-commerce.

However, Indian Prime Minister Narendra Modi was conspicuous in seeking recalibration of the RCEP timeline. This was probably due to his projection of India as a pioneer in financial technology, at the Singapore Fintech Festival on the sidelines of the ASEAN-organised summits in mid-November 2018, for which he had come.

During the prolonged RCEP negotiations, India primarily advanced economic arguments. It particularly cited its huge deficit of over US$60 billion in a total value of over $80billion trade with China. In the event, diplomacy in furtherance of India’s strategic autonomy, rather than pure economics, clinched the extended timeline to finalise RCEP.

Almost until the Second RCEP Summit in Singapore on 14 November 2018, the tussle was over suitable language for the leaders’ eventual joint statement. India saw the summit-eve state of play as “substantial progress” in the negotiations. Many others were convinced that a “substantial conclusion” was already achieved.

India’s concern was that such a view would imply that what remained to be done was, metaphorically, fixing the icing on the cake. Consequentially, India sought and obtained the support of Japan along the way. As a key player in the revised Trans-Pacific Partnership, Japan is also ASEAN’s long-time and crucial economic partner.

Finally, however, due to deft diplomacy by the ASEAN Chair, Singapore, all leaders “welcomed the substantial progress” made in 2018 in particular, and expressed collective determination to “conclude” RCEP in 2019.

Many analysts project the potential RCEP as a would-be China-centred economic universe. This overlooks the “centrality” of ASEAN in conceptualising and piloting the challenging negotiations among 16 sovereign states with diverse economic profiles.

Nonetheless, China may dominate RCEP when it finally takes shape. Currently the world’s second-largest economy, China is also an emerging technology powerhouse with a laser-like focus on artificial intelligence and the Fourth Industrial Revolution.

India’s delicate interactions with China have, therefore, acquired pivotal relevance to the RCEP process. Indeed, ASEAN recognises India as a major rising economy, and appears keen to have it on board in the RCEP endeavour.

Such recognition parallels an Indian strategy of seeking more benefits in the services sector to partially offset inevitable concessions on trade-in-goods.

A spin-off for India and China is their chance to fashion a bilateral trade agreement which they do not have. However, China is not happy with the Indian offers during RCEP negotiations so far. On the range of goods for tariff reductions, India’s current offer falls short of China’s minimal expectation by about six percentage points.

China is believed to encourage India to offer more by citing the latter’s untapped growth potential. However, Delhi is apparently assessing whether the Chinese negotiators would be accommodative towards India because of their big, ongoing trade dispute with the United States.

In this overall milieu, Modi’s meeting with US Vice President Mike Pence in Singapore on 14 November 2018 acquired unusual importance. They reaffirmed US-India strategic partnership in the “free and open” Indo-Pacific zone. Modi had previously emphasised that the Indo-Pacific zone must also be “inclusive” in its scope. This did not, however, dilute his latest Indo-Pacific commitment in concert with Pence.

Modi sought a full-spectrum US engagement in India’s defence sector. India has already signed three out of four “foundational agreements” for being considered by the US virtually on par with some of its military allies. Unsurprisingly, Pence now spoke of strengthening US-India “cooperation and coordination” on security and counter-terror issues.

Significantly, too, Pence remained mindful of India’s modest trade surplus with the US, still the world’s largest economy. He, therefore, called for “free, fair and reciprocal trade” with India. Not missing the point, Modi said India was now reducing its trade surplus by buying American oil and gas, for instance. At the same time, he sought US’ liberalisation of top-notch and long-term visas for high-tech Indian professionals.

Despite such an increasing rapport, India and the US cannot take for granted their strategic partnership in today’s complex geopolitical environment. Apart from the Sino-American uncertainties of the present moment, the US is acutely aware of India’s penchant for “strategic autonomy” even under Modi for the past several months.

For India, looking towards the West, namely the US, and acting in the East, namely linking with the ASEAN initiatives, are two aspects of “strategic autonomy”. However, the springboard for real, not symbolic, “strategic autonomy” in foreign policy is comprehensive national strength and not the mere calculus of options. This is indeed the reality check for India.