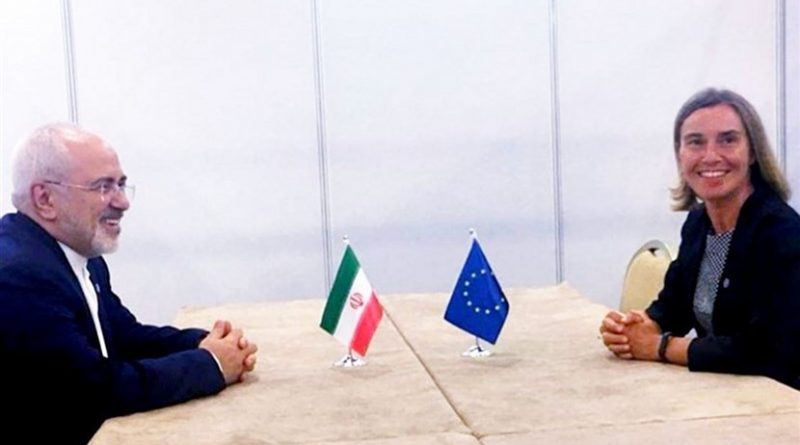 The US has implemented an expansive set of sanctions against Iran that jeopardise the Joint Comprehensive Plan of Action (JCPOA). US concerns regarding the agreement are three-fold. According to President Donald Trump’s administration, the agreement does not prevent Iran from acquiring nuclear weapons;  it does not prohibit Iran from developing  ballistic missiles, and finally, it gives free reign to Iran’s conduct of an intrusive foreign policy in West Asia to the detriment of US interests. From the perspective of the European Union (EU), however, the JCPOA gives a great boost to global nuclear non-proliferation. It contends that the JCPOA was never intended to consider ballistic missile development and other questions of foreign policy, and that it was this insulation that led to a successful nuclear agreement. The EU is particularly invested because it played a crucial role in the negotiations – a dead JCPOA will impact its image as a credible and autonomous international actor. Thus, it sees Trump’s actions towards Iran as not only a clear violation of the JCPOA but also a challenge to EU’s foreign policy image.

In addition to the EU3 (UK, Germany and France), the EU as an institution has also been an important foreign policy actor in negotiating the Iran nuclear deal. Its effective involvement in negotiating the agreement was the result of various factors: US unwillingness to engage politically with Iran beyond proposing aregime change, and the fact that Iran wished to have a Western interlocutor.

The JCPOA was a proficient demonstration of the EU’s capacity for diplomatic negotiation,  multilateral engagement, and implementation of international law. Instead of looking to a military confrontation with Iran, the EU guided the international community through a negotiated path by mediating and offering technical proposals to the other involved parties. This included proposals to reduce Iran’s centrifuges by two-thirds, provide enhanced access to IAEA inspectors for 20 years, restrict uranium enrichment to a maximum level of 3.67 per cent for 15 years, and reduce the low enriched uranium (LEU) stockpile by 98 per cent. By playing an instrumental role in helping reach a settlement with Iran, the EU was able to portray itself as an autonomous and credible international actor.

Implications of US Sanctions

US  sanctions has consequences for all the JCPOA negotiating parties. Crucially, a derailing of the agreement will bring into question the EU’s newly minted show of credible autonomy, particularly as independent of the US.

A stronger and more united image has been a primary EU pursuit since the end of the Cold War. However, historically, it has not been successful in shoring up this credibility. During the Yugoslav Wars, the EU was an inoperative actor and needed US military and diplomatic assistance to put an end to the conflict. Similarly, during the US invasion of Iraq, the EU was unable to respond with a single voice. These shortcomings were addressed through the JCPOA.

International support for the JCPOA remains strong despite US’ withdrawal. The rest of the states party to the JCPOA continue to  implement the agreement, and many other non-party states support the deal. The EU should capitalise on this widespread support to build a common front against the US decision. However, to gain leverage over the US, the EU must be able to present an alternative mechanism capable of circumventing US sanctions, such as the 1996 blocking statute and the creation of a special purpose vehicle. As part of this strategy, the EU could attempt to box the US in from other international security debates  – for example, Syria and/or Israel-Palestine – by moving discussions to other platforms other than the UN Security Council. These could include regional organisations or other policy-relevant platforms. It could also seek to involve stakeholders other than the US.

At the same time, the EU should avoid taking steps aimed at appeasing Trump that would likely jeopardise the deal. If the EU, in an attempt to brave US sanctions, accepts a renegotiation of the JCPOA under Trump’s terms, it will lose all its credibility through its legitimisation of US behaviour. The only case in which the EU should be willing to discuss the deal is when the US is ready to address issues exclusive only to the JCPOA.

The EU must toughen its stand against the Trump administration’s decision regarding the JCPOA, attempt diplomatic isolation to the extent possible, and build a common front. With the US showing no signs of changing its position, the EU must be ready for a dialectic and political confrontation.

Home » US Sanctions On Iran: An Examination Of EU’s Role – Analysis

One thought on “US Sanctions On Iran: An Examination Of EU’s Role – Analysis”