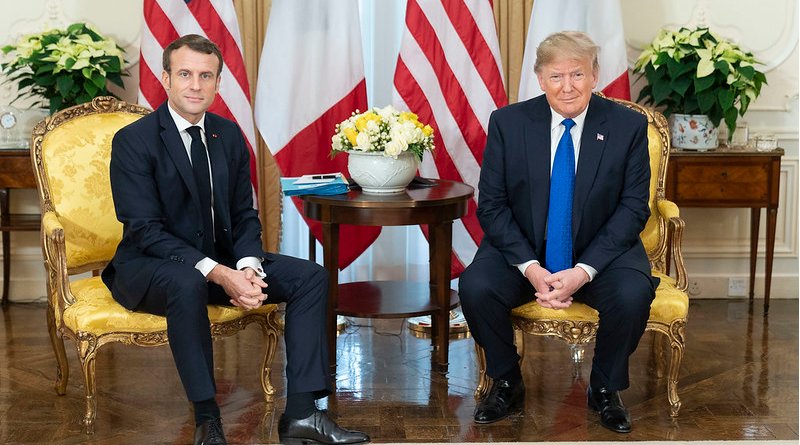 US President Donald Trump clashed with his French counterpart Emanuel Macron during the NATO summit in the UK this week. Macron described the alliance as “brain dead” last month because of the US’ lack of commitment. Trump replied that the French president’s comments were nasty and that he has been “very disrespectful,” but Macron stood by his words.

Though Macron’s words may have been harsh on the White House as the US still portrays itself as the world’s superpower, the reality is that America is not acting as such. The US is facing a difficult trade-off: It wants to keep its leading role in the world, yet — at the same time — it seeks to disengage from world affairs. Trump has adopted the Ronald Reagan slogan “Make America Great Again.” Nevertheless, unlike Reagan, who pursued an active, even an interventionist, foreign policy, the current administration has a very hands-off approach. The main question is how America can be “great” or “first” if it is less engaged and less relevant in world affairs.

The hands-off approach started with the previous administration. The pillars of US foreign policy, such as its role in the Middle East, seemed shaky. Barack Obama declared that he was more interested in middle-class America then in the Middle East. The current trend is to disengage. Though the Trump administration is conducting the disengagement in an abrasive manner, this policy is only a continuation of the previous administration. This approach might look very logical: It is better for the administration to focus on domestic issues and it is better for the US to put its own house in order instead of trying to put other countries’ houses in order. However, in the real world, this logic does not play out. The prosperity the US enjoys comes, in large part, from its relations with the world. The oil concessions and arms deals the US signed were granted for economic as well as for geopolitical reasons.

The US wants to position itself as a superpower, yet at the same time it wants minimum engagement with the world. There is a duality between the US’ behavior and the appearance it wants to project

We see the US wanting to maintain the image of supremacy and leadership without really exercising it. On the military front, the current administration has invested heavily. It has dedicated a budget of $738 billionfor 2020, even as it is disengaging from the world militarily. In Syria, it left the northeast as a playing field for the Russians, the Turks and the Assad regime. Trump says he wanted to bring those “boys” back home, referring to American soldiers. But bring them home to do what? The soldiers in the US military chose the military as their career. They seek to deploy to advance professionally. In this case, the US seeks to promote its image as a military superpower, but in practice it is not acting as one.

This duality is shaking allies’ confidence in the US. How can it maintain its alliances if it is not perceived as reliable? How can the US be trusted if it is no longer available to come to its partners’ aid when they need it? Macron’s “brain dead” comment did not come out of nowhere. It came as a result of European frustration with American isolationism.

In addition to this duality, America’s allies do not see an overall strategy binding Washington’s foreign policy. The perceived lack of strategy and the adoption of transactional foreign policies do not inspire trust and push allies to hedge their bets. The Arab Gulf, for example, has been seeking to diversify its pool of alliances by looking into deepening relations with Russia and China. In recent years, China and the Arab Gulf states have exchanged several high-profile state visits and increased bilateral trade and strategic cooperation. Billion dollar deals are being awarded to the Chinese, including a $28 billioncooperation agreement with Saudi Arabia. As for Russia, the Gulf seems to be happy to embrace its influence. During Vladimir Putin’s visit to the region in October, cooperation agreements valued at $2 billion in Saudi Arabia and $1.3 billionin the UAE were signed. Russian company Lukoil was also awarded a 5 percent stake in Abu Dhabi’s Ghasha gas field. This is the first time a Russian company has gained an upstream contract in the UAE. The Trump administration is accusing the current world order of not benefiting the US. However, an alternative world order headed by its competitors would definitely not benefit America.

Trump should not feel offended by Macron’s remarks; they were not insulting or disrespectful, but merely a wake-up call. The US needs to make strategic choices. If it wants to maintain its leading position, it has to pay a price. It has to be in the game for the long run; it needs to think strategically. On the other hand, the US can always choose to be like Canada — a country whose citizens enjoy high standards of living; in fact the bestin the world in terms of quality of life. However, Canada has no influence over world affairs. It does not claim world leadership or seek it. What will be the US’ choice? As events unfold and as America’s competitors cooperate and collude to weaken it, the US will soon have to make this hard choice.

Presently, Earth is the only known location where life exists in the Universe. This year the Nobel Prize in physics