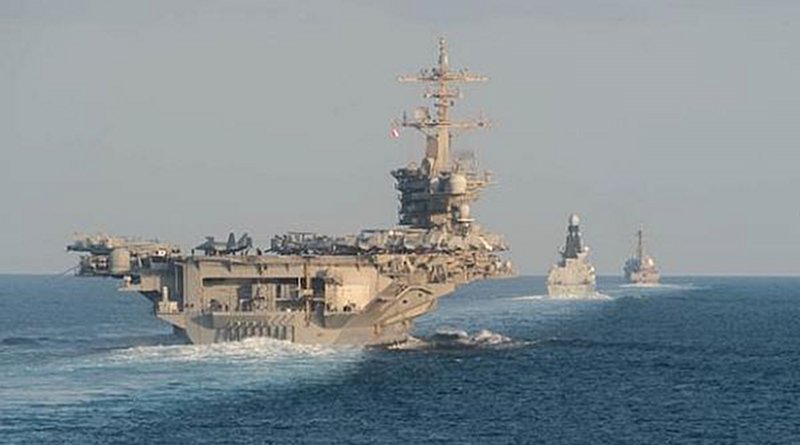 (RFE/RL) — The United States says it is considering sending thousands of additional troops to the Middle East over concerns about Iranian actions in the region.

John Rood, the undersecretary of defense for policy, told Congress on December 5 that Washington was “observing Iran’s behavior with concern.”

Rood did not specify the number of troops being considered, but he denied during his testimony a report in The Wall Street that the Pentagon was considering sending some 14,000 new forces to the region.

The official did not say where the troops would be deployed or what the time frame would be but told AFP that recent attacks on U.S. assets by Iranian-linked groups had prompted the troop-level review.

Officials told Reuters that intelligence over the past month was indicating that Tehran has been repositioning forces and weapons.

Rood told the Senate Armed Services Committee that “we’re continuing to look at that threat picture and have the ability to dynamically adjust our force posture.”

Tensions between Tehran and Washington have increased substantially since President Donald Trump in May 2018 pulled out of the 2015 denuclearization pact signed by Iran and six world powers and began reimposing sanctions that had been eased in return for limits on Tehran’s nuclear program.

The United States has accused Iran for attacks on the major Abqaiq oil processing center in Saudi Arabia, a close U.S. ally and bitter regional rival of Iran. Tehran has denied the charge.

Washington and its Middle Eastern allies have also blamed Iran for explosions that damaged as many as four ships outside the Strait of Hormuz in May, and then accused Tehran of using mines to attack two oil tankers in June.

Iranian forces then shot down a U.S. drone that they said was in Iranian airspace, saying it sent “a clear message” to Washington. U.S. officials confirmed the drone’s downing but called it an “unprovoked attack” in international airspace over the strait.

Iran has since seized several international oil tankers in actions seemingly designed to assert Tehran’s right to police traffic in the strait, which is a conduit for huge amounts of the region’s oil exports.

The events led the U.S. military to lead a coalition of forces to monitor shipping lanes in the Persian Gulf region. A separate French-led mission is scheduled to begin in January.