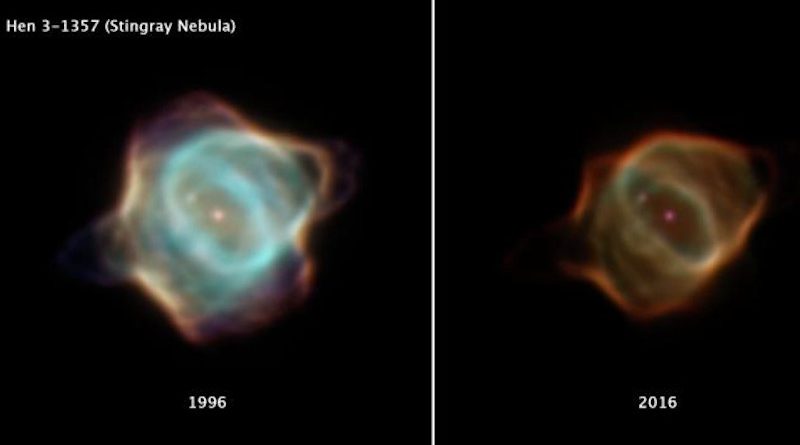 This image compares two drastically different portraits of the Stingray nebula captured by NASA's Hubble Space Telescope 20 years apart. The image on the left, taken with the Wide Field and Planetary Camera 2 in March 1996, shows the nebula's central star in the final stages of its life. The gas being puffed off by the dying star is much brighter when compared to the image of the nebula at the right, captured in January 2016 using the Wide Field Camera 3. The Stingray nebula is located in the direction of the southern constellation Ara (the Altar). CREDIT Credits: NASA, ESA, B. Balick (University of Washington), M. Guerrero (Instituto de Astrofísica de Andalucía), and G. Ramos-Larios (Universidad de Guadalajara)

Astronomers have caught a rare look at a rapidly fading shroud of gas around an aging star. Archival data from NASA’s Hubble Space Telescope reveal that the nebula Hen 3-1357, nicknamed the Stingray nebula, has faded precipitously over just the past two decades. Witnessing such a swift rate of change in a planetary nebula is exceeding rare, say researchers.

Images captured by Hubble in 2016, when compared to Hubble images taken in 1996, show a nebula that has drastically dimmed in brightness and changed shape. Bright, blue, fluorescent tendrils and filaments of gas toward the center of the nebula have all but disappeared, and the wavy edges that earned this nebula its aquatic-themed name are virtually gone. The young nebula no longer pops against the black velvet background of the vast universe.

“This is very, very dramatic, and very weird,” said team member Martín A. Guerrero of the Instituto de Astrofísica de Andalucía in Granada, Spain. “What we’re witnessing is a nebula’s evolution in real time. In a span of years, we see variations in the nebula. We have not seen that before with the clarity we get with this view.”

Researchers discovered unprecedented changes in the light emitted by glowing nitrogen, hydrogen, and oxygen being blasted off by the dying star at the center of the nebula. The oxygen emission, in particular, dropped in brightness by a factor of nearly 1,000 between 1996 and 2016.

“Changes in nebulae have been seen before, but what we have here are changes in the fundamental structure of the nebula,” said Bruce Balick of the University of Washington, Seattle, leader of the new research. “In most studies, the nebula usually gets bigger. Here, it’s fundamentally changing its shape and getting fainter, and doing so on an unprecedented time scale. Moreover, to our surprise, it’s not growing any larger. Indeed, the once-bright inner elliptical ring seems to be shrinking as it fades.”

Ground-based observations of other planetary nebulae have shown hints of changes in brightness over time, but those speculations haven’t been confirmed until now. Only Hubble can resolve the changes in structure in this tiny nebula. The new paper examines every image of the Stingray nebula from Hubble’s archives.

“Because of Hubble’s optical stability, we are very, very confident that this nebula is changing in brightness with time,” added Guerrero. “This is something that can only be confirmed with Hubble’s visual acuity.”

The researchers note the nebula’s rapid changes are a response to its central star, SAO 244567, expanding due to a temperature drop, and in turn emitting less ionizing radiation.

A 2016 study by Nicole Reindl, now of the University of Potsdam, Germany, and a team of international researchers, also using Hubble data, noted the star at the center of the Stingray nebula, SAO 244567, is special in its own right.

Observations from 1971 to 2002 showed the temperature of the star skyrocketing from less than 40,000 to 108,000 degrees Fahrenheit, more than ten times hotter than the surface of our Sun. Now, Reindl and her research team has shown that SAO 245567 is cooling. Reindl speculates the temperature jump was caused by a brief flash of helium fusion that occurred in a shell around the core of the central star. Recently, the star appears to be backstepping into its early stage of stellar evolution.

“We’re very lucky to observe it just in that moment,” said Reindl. “During such a helium shell flash, it evolves very quickly, and that implies short evolutionary timescales, so we can’t usually see how these stars evolve. We just happened to be there at the right time to have caught that.”

The team studying the rapid fading of the Stingray nebula can only speculate at this time what’s in store for the future of this young nebula. At its present rates of fading, it’s estimated the nebula will barely be detectable in 20 or 30 years.