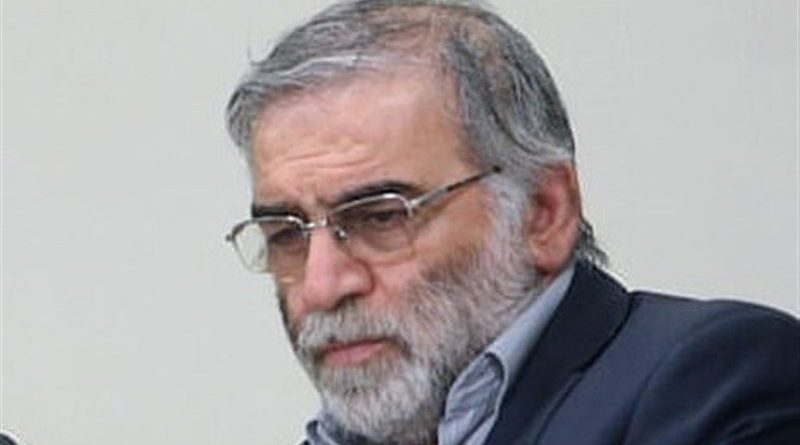 After the assassination of Prof. Mohsen Fakhrizadeh, the “father” of Iran’s nuclear program, the question on everyone’s mind was the identity of the perpetrator. The list of suspects was relatively short (actually very short), and pointed mainly at Israel, with the consent and maybe even the encouragement of the US.

Ostensibly, Israel’s motive, or that of any other country keen to hamper Iran’s nuclear development, seems self-explanatory, even for those who vehemently oppose such acts of international piracy. However, the timing raises the question of whether there was more to this operation than simply harming the scientific aspects of Iran’s nuclear program.

Clearly, it would be naive to believe there was no link between the decision to assassinate one of the main figures of the Iranian nuclear program, and the timing — in the twilight of the Trump presidency. Fakhrizadeh had long been a marked man for those who wanted to halt Iran’s nuclear military ambitions. However, the elimination of one individual, as important as he was, won’t curb those ambitions. At worst it is a setback that will require regrouping rather than starting from scratch; after all, an accumulated knowledge prevails among the Iranian scientific community. This may indicate that the timing of Fakhrizadeh’s killing is at least as important as the target itself, and suggests that it is a move to disrupt any attempt by the incoming Biden administration from returning to the JCPOA nuclear agreement between Iran and the P5+1, and removing the sanctions on Iran.

As well as the need to make the Middle East a nuclear weapon-free zone, there is a near-universal consensus that an Iran with nuclear military capability is a threat to peace and security in the region and beyond. Moreover, few are inclined to buy the official Iranian line that it is spending an abundance of energy and resources on a nuclear program that is solely for civil purposes. Yet the question remains: What is the optimum way to stop Tehran from acquiring nuclear military capability? Israel’s approach since the 1990s — one that has intensified during Benjamin Netanyahu’s years at the helm — is through punitive measures, and if necessary military operations, overt or covert.

However, Iran’s nuclear program has survived diplomatic pressure, economic sanctions, assassinations of scientists, physical sabotage of nuclear sites, and cyber attacks. It was actually the JCPOA, despite some of its obvious shortcomings, that slowed Iran’s program by tying the removal of sanctions to limiting its enrichment of uranium. President Trump’s withdrawal left the agreement hollow and meaningless, and without a viable alternative. It may be argued that Iran breached the spirit of the agreement by continuing the development of ballistic missiles and its aggressive actions in the wider region; but it did not violate the terms of the agreement itself until the US withdrew. The fear among those who supported Trump’s withdrawal, especially Israel, is of a Biden administration re-joining the JCPOA; and on this view the assassination of Fakhrizadeh was probably aimed at instigating a crisis that would harden Iran’s position and prevent even a mild rapprochement between Tehran and Washington.

For Iran, the killing of Fakhrizadeh is not only the loss of a leading scientist who was also a senior figure of the military establishment, but an unsettling demonstration that a foreign force has the intelligence, the capability and the audacity to execute such a sophisticated, accurate and deadly operation. Considering Fakhrizadeh’s centrality to the regime’s strategic objectives, his assassination in broad daylight inside Iran is a massive embarrassment.

Israel’s ability to hit Iranian targets in Syria at will, together with the latest assassination, is adding to Iran’s sense of vulnerability, its sense of victimhood and its paranoia. This in turn will lead to a bitter internal debate among the regime’s different and conflicting centers of power. Should it retaliate immediately against Israeli or even US targets, or should it reconsider its foreign policy priorities, or at least wait until Biden takes office? Retaliating, especially in a manner likely to escalate tensions with Israel and possibly other countries, is not going to serve Iranian interests, but those Iranians who thrive on conflict and friction are advocating such a course of action.

The regime’s more pragmatic elements understand the danger of overreacting, especially at a time when Washington is going through a political transition, and Israel will soon be heading to the polls. President Hassan Rouhani has promised a response, but he qualified that by asserting that it will happen in “the proper time.” In other words, it might never happen if it depended on him, but this is not necessarily the case, especially as Iran is about to enter its own presidential election year. A more hardline candidate is expected to win in June, which may also harden the position of those currently in power.

Relations between Israel and Iran dominate a significant portion of Middle East affairs, and for all the wrong reasons. Escalation by proxy, covert and even direct confrontation can’t be ruled out, and it behoves the international community and the new US administration to step in and prevent it, in their own interests as much as those of Iran and Israel.

Home » Who Killed Iran’s Nuclear Mastermind, And Why Now? – Analysis